Observations on "The Best American Comics 2014" 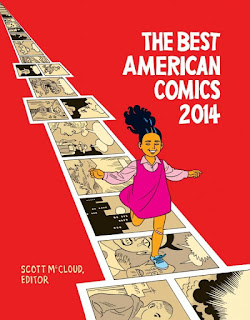 Awhile ago I was able to acquire a copy of "The Best American Comics 2014" for the purpose of review. Considering how the books come out before the year of 2014 has yet ended and actually cover the previous year's comics, I've taken my time getting around to writing about it. The reason for that is how the thing is, I don't think I want to actually engage in a "true" review, as obviously most of the stuff contained within the book is delightful, and even if the, "Best," of something is subjective, a lot of people would agree it's hard to go wrong when a book contains so much talent (look at this list of names and be awed). Don't get me wrong, I'll still assign some stars at the end, but this ain't an actual review. Plus, others have written thoughtful pieces about what the book contains. No, what I'm going to to do is talk about why I am pleased that a book such as "The Best American Comics 2014" is around.

As the article I just linked to mentions, a lot of folk do admittedly still sometimes think of comics as something just for kids--quite recently a college student was mad that she was assigned to read, "Pornography," as opposed to, "Batman and Robin," in her college course on comics (that, "Pornography," was such seminal works as "Sandman" and "Fun Home"). While super-heroes are admittedly still a large part of comics, they are by no means any longer just for kids, evident to any one who picks up some of the more-edgy works out there. Still, despite much of society being more accepting of comics as a true art-form all ages can enjoy, sometimes a perception persists of it all being, "Kids stuff." A book such as "The Best American Comics 2014" helps fight that view.
Apparently guest-editor for the 2014 edition, Scott McCloud, did want the first issue of Marvel's "Hawkeye" to appear in the book but it was for some reason unable to. Interestingly I recall a similar problem happened with an earlier edition when it couldn't be worked-out to get some of "Batman: Year 100" in one of the entries, but in some ways this is perfectly alright. By having things like "Saga", "Hip-Hop Family Tree", and "Building Stories," as opposed to heroes, people get to see how such a variety of comic-works exist, and can be enjoyed. Plus, the list in every book of other recommended works provides encouragement for people to seek out even more material that they could enjoy.

It's 2015 and we shouldn't have to defend comics. Sometimes we still do, however, and having a book like "The Best American Comics 2014" can help with that. There are of many quality works that get overlooked by the series, but regardless of how open to interpretation, "Best," can be, this definitely is some of the, "Better," stuff that you can show to people who ever question the veracity of comics as anything more than childish reading material or simply the first-step in something becoming a T.V. show or movie. Although that's a whole separate thing to talk about sometime.
5 out of 5 stars.
Posted by David Charles Bitterbaum at 10:04 PM