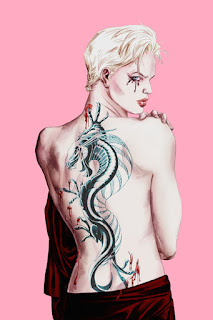 I would say I'm a fan of David Hine. From his highly enjoyable work for Marvel on titles such as "District X" and "Silent War" to fascinatingly bizarre stuff such as, "The Bulletproof Coffin." I was rooting through a dollar bin on Free Comic Book Day this year and stumbled across "Storm Dogs" #6, at which point I realized that I didn't think I ever actually read it. I recalled reviewing the fifth issue back in 2013, but said to myself, "Can I recall how this ended?" It occurred to me that I could not, and that perhaps I had missed the final issue those couple years ago. Therefore, I picked up "Storm Dogs" #6 for a hundred pennies (and a bit of tax). The problem is, I enjoyed it.

Yes, I did just say my enjoyment of the comic was a problem. Why? Well, it ends with a huge cliffhanger about a native alien race becoming hostile to humans, a bunch of corporate intrigue kicking in (some business-folk would like to take-over the planet), and some very key characters seeming to die. It's wild, exciting...and to this day I have heard nary a peep about a Volume 2 since this Bleeding Cool Article in May...of 2014. 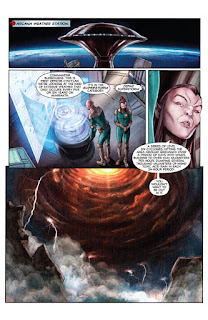 You can buy your own digital copies of "Storm Dogs" from Image, go buy the trade of volume 1, or could have the good luck to stumble upon it in single issues as I did with this final one. I would recommend you do so as it really is a fascinating exploration of what it means to be a human. It touches on the idea of having less control of our body in a future where technology easily connects us with the senses of others, and it covers how the so-called march of progress and industrialization can at times hurt people native to certain areas.

It of course needs to be discussed how amazing Doug Braithwaite's artwork is. Extremely moody and dark, the flashes of brightness in scenes of action or sudden violence both alarms a reader while delighting their eyes. I would say more, but it is hard to keep finding synonyms for, "excellent."

The final page says we can expect a "Storm Dogs: Volume 2" but as far as I can tell that isn't coming anytime soon. I tweeted David Hine while writing this article and if I hear back will be sure to share what he tells me. As it stands now, however, "Storm Dogs" is a really good series, one that I'm glad to have been able to finish reading the first (and possibly final) volume of in this....tale from the dollar bin!

UPDATE:
David Hine got back to me and told me that Volume 2 should hopefully be announced soon!