Part Deux
When it comes to comics, probably the biggest name besides Marvel and DC would be Image Comics. Around since the early 1990's, Image at first put out what one could argue were mostly hokey knock-offs of the Big Two's comics, but over time this publisher has grown into a force to be reckoned with, featuring a wider variety in content than you will probably find anywhere else. To illustrate what a unique publisher Image is let's examine some of their titles from the popular and somewhat traditional to the newer and more, "Esoteric," as one could say.

Reviews to Enjoy
The Fade Out #3
Ed Brubaker and Sean Philips almost always do good work. True, I may have found "Fatale" to not be my cup of tea, but when they have almost always "hit" more than "missed" that means any new project by them will at least be worth trying out. I'm glad I have given, "The Fade Out" a chance as only three issues in it is shaping up to be quite the intriguing comic. The first two issues focused on some particular characters and their stories, but this one shifts the focus entirely, making it clear this isn't just one individual's story, but in fact moreso an epic tale of Hollywood in the 1940's with characters that may be fictional, but who aren't too far removed from the reality of those times.

Philips is just an amazing craftsman when it comes to creating noir-styled art, so it isn't any surprise that "The Fade Out" is as gorgeous as it is intimidatingly moody. All of that said, the story is still clearly in an early stage that I think needs a bit more feeling-out before I can be certain this comic will be something as stellar as "Sleeper" or end up letting me down as "Fatale" did.
4 out of 5 stars.

Hrm, I'm just not feeling this. Kurt Busiek is a great writer, Benjamin Dewey turns in some quality art, and stellar colorist Jordie Bellaire are all generally wonderful, so it is just odd I don't care for this comic that much. It has a cool concept with talking anthropomorphic animals who utilize magic panicking over how the magical force seems to be drying up, but I just found the characters mostly uninteresting, and the mystery of who this great champion is they are attempting to summon to present-times to be--again--mostly uninteresting. I mean there is a hint of a twist that the champion could be something unexpected, but meh. I just found myself thinking the art to be good, but the story to just be unimpressive despite coming from someone with such a good pedigree as Busiek. I guess they can't all be winners.
2 out of 5 stars.

Saga #24
Ah, good ol' "Saga", the comic you can basically always count on to be at worst enjoyable and at best utterly jaw-dropping amazing. This issue is somewhere between that, not being as incredible as some but still pretty damned good. Plus that adorable seal I love pops up in it... 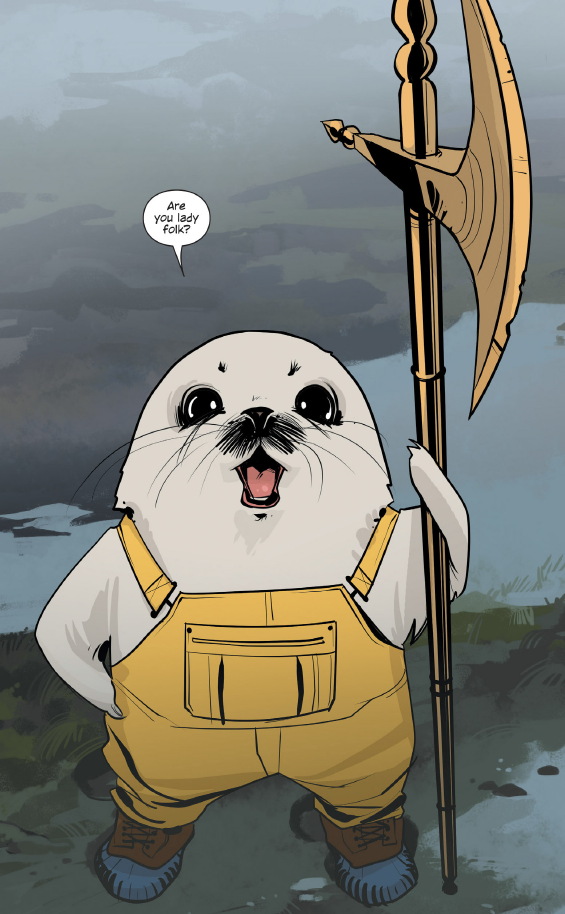 This issue checks-in with a number of characters we haven't seen for a bit, and wraps up some elements of the plot I was wondering about while giving us all plenty of new questions. Basically, it is more stellar stuff from the comic that everyone should be reading. I know I'll probably be giving some people that upcoming big hardcover that collects the first 18 issues if I need to find any good presents and have enough money to afford it.
4.5 out of 5 stars.

Remember when I said some of the titles were newer and a bit stranger than others? Well, here is a prime example of that. Any comic that features a humanoid biker-Orangutan having graphically-drawn oral sex performed on him at the funeral of a fellow ape-man clearly is going to be a strange and wild ride. Basically, we see this biker gang as they are attending the funeral for their departed comrade, Mojo. Such a simple description doesn't do the comic justice however, as the writing of Keenan Marshall Keller is both humorous and heartfelt (you really do feel the sadness of everyone mourning Mojo), and Tom Neely turns in artwork that is just stellar, be it a quiet moment at the ceremony or some action-packed fight scenes when The Humans end up getting into a brawl with The Skabbs (an opposing biker-gang). The way he breaks-up the panels during a fight imparts the confusing and uncontrollable nature of when a bunch of people are punching each other, and it's just really, really cool.

There is some neat back-matter too, such as a section that declares how every month there will be a link to a new song or two people can listen to, requests for letters, an address you can send money to for a neat patch of The Humans logo (which appears to be a real address as it is also the one for snail-mail letter to "The Humans"), and a note about the artist behind the pin-up on the back of the comic--which features a drawing by none other than Benjamin Marra himself, an artist I've written of enjoying for his over-the-top style. I found this comic extremely enjoyable and would encourage you to pick it up if you like stuff that is a bit weirder, because you will probably love it too!
5 out of 5 stars.

Zero #11
Before actually talking about this comic I just wanted to note this one also has some surprisingly explicit oral sex performed on a male for a mainstream comic. Is this becoming the new hot trend of stuff to illustrate, like in the 1990's when a character carrying around a ton of guns was hip? Anyways, "Zero" has been a strange beast since the start. Always written by Ales Kot with coloring done by the phenomenal Jordie Bellaire (who also has colored the sadly underwhelming "Tooth and Claw" I discussed a bit above), each issue has purposely had a different artist illustrating various points in the titular Zero's life, to fascinating and highly enjoyable results.

The series started out more as the usual spy-drama jumping around in time to various missions in the life of Edward Zero, but slowly morphed into something quite strange. Between the interesting melancholy of Edward just wanting to be left alone, to the hints at various points in the comic's run that he was at fault for some kind of global disaster, this went from seeming like a James Bond-type comic to being an interesting examination of one man's humanity and how he lost it, tried to regain it through a life of peaceful solitude, and as we have seen from scenes in the later-future, failed at it. I'm interested in seeing how things turned out the way they did and that's why this comic gets...
4 out of 5 stars.

Closing Section
Image has some great stuff coming out, along with things that I don't really like but others might. Up in a little bit we will close-out these rant-reviews with a look at works from Marvel and DC.
Posted by David Charles Bitterbaum at 2:00 PM