Two Asylum Press Comics I Read and Shall Review--"Heavy Metal #271" and "Fearless Dawn: Eye of the Beholder" 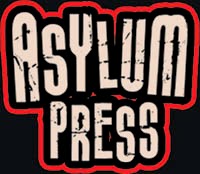 Asylum Press has released a variety of comics I've read over the years. They don't have a huge output, but I've generally enjoyed their horror-comic anthology titles and would say I'm a fan of the "Fearless Dawn" comics by Steve Mannion. I've never really talked about Asylum Press on the blog before so I thought it would make sense to do so considering I just recently actually read two titles by them--well, one fully by them and the other through a special guest-editor edition of "Heavy Metal".

Heavy Metal #271
Ah, the long-running "Heavy Metal". While it may have been home to the more interesting and experimental stuff back in the past I've found more and more recently it has had a little of that creativity, but a lot more of what seems to be its bread and butter--gratuitous T&A and extreme violence. Now, sometimes a little T&A and over-the-top violence in comics can be nice, especially if it is well illustrated, and the thing that keeps "Heavy Metal" from seeming like just another random trashy comic (or comic magazine) is that generally the art is quite good throughout the anthology series. 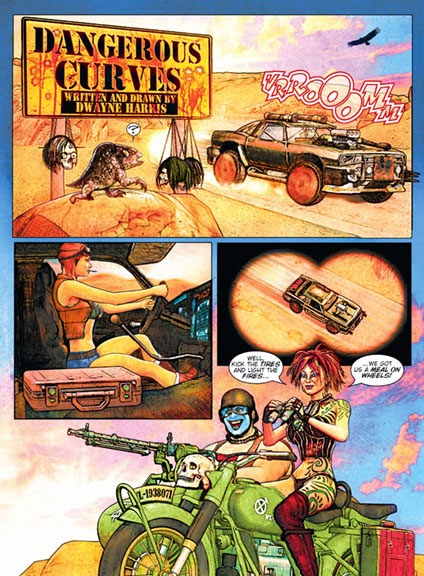 This issue features art which is almost always good with only a few missteps (the "Dangerous Curves" story-art seemed a little too computer-driven and static despite being an action-tale), and a good deal of great-looking stuff--the famous (infamous?) Tim Vigil beautifully illustrates an otherwise somewhat generic zombie-yarn, for example. The only thing that made me a little uncomfortable are the stories that hint at forced sex between characters (such as when a strange squid-monster copulates with a woman bathing naked in the pond) but usually then turn-out to have everything as being consensual--except for the "Mutation" story which basically hints at a rape with the end of the story and therefore left me feeling some unease. 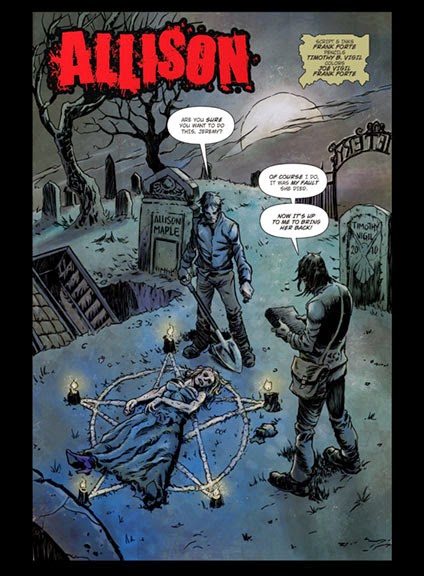 Overall this issue of "Heavy Metal" was essentially what you would expect to get from the series--sex and gore, with slight hints of something more creative (the "Warlash" story reads as an intriguing take on what you would get if you meshed Judge Dredd with Batman and gave him a noir-styled inner-narration). For acheving what it set out to do and at least being entertaining in a guilty-pleasure sort of way I would rate this...
3 out of 5 stars.

Fearless Dawn: Eye of the Beholder #1
Despite the #1 next to it and declaring it is a one-shot, this issue actually ties pretty closely into some other one-shots that have preceded this as a bit of a series. I actually think I unfortunately missed the "Hard Times" issue that came before this, but still was able to follow things pretty well, if mostly thanks to a "recap" page at the start of the book that helped fill-in any details I may have missed since the "Jurassic Jungle Boogie Nights" issue. 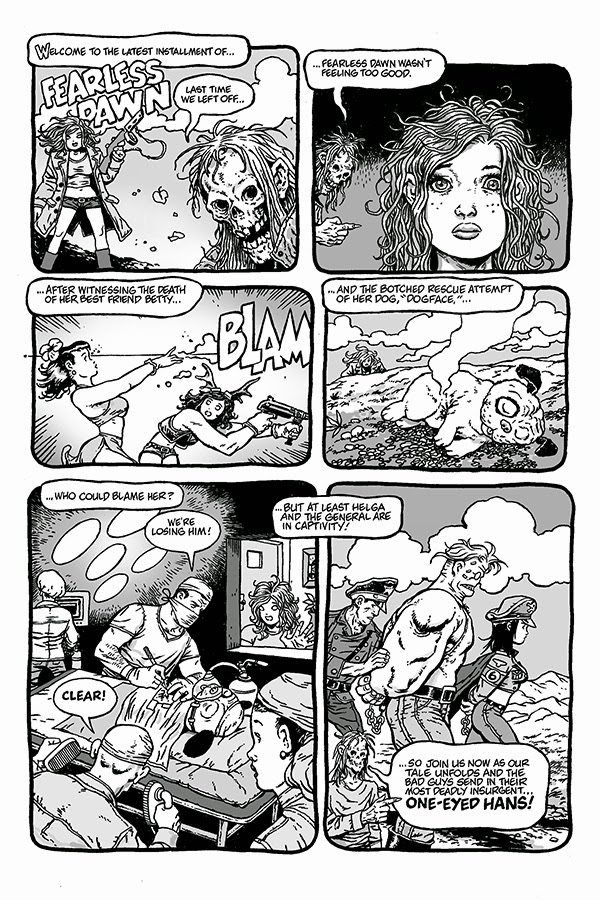 I  haven't read all of Mannion's comics featuring Fearless Dawn, but of the ones I have I've always been struck by how expertly his art can vary between looking cartoonish and silly to having a disturbingly realistic appearance. He honestly is just a master draftsman and his artistry skills make-up for the fact that the story-lines featuring Dawn can at times be a bit lacking. It is usually just her fighting against some evil Nazis, be it in space, in the aforementioned jungle full of dinosaurs, or whatever it seems Mannion feels like drawing. 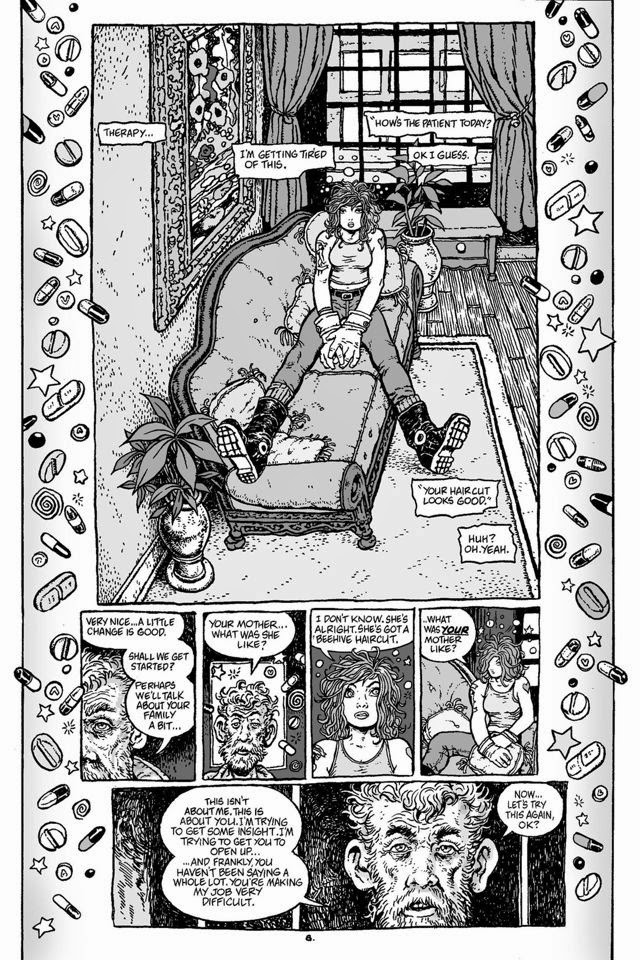 This issue actually does have a somewhat stronger plot than some others however, as we actually see some cracks in Dawn's usually strong facade of being as emotionally strong as she is physically capable. Basically, her best friend and sidekick Betty has died along with Dawn's beloved dog, and it has resulted in her being extremely emotionally unstable. Seeing the fragile humanity of a character who normally has seemed to let little phase her is refreshing and makes Dawn seem infinitely deeper than the "Mary Sue" she would at times seem to be in previous issues. There is the usual Nazi-fighting and such, but it seems more, emotional, with Dawn's sadness and anger making her feel just that much more "real". 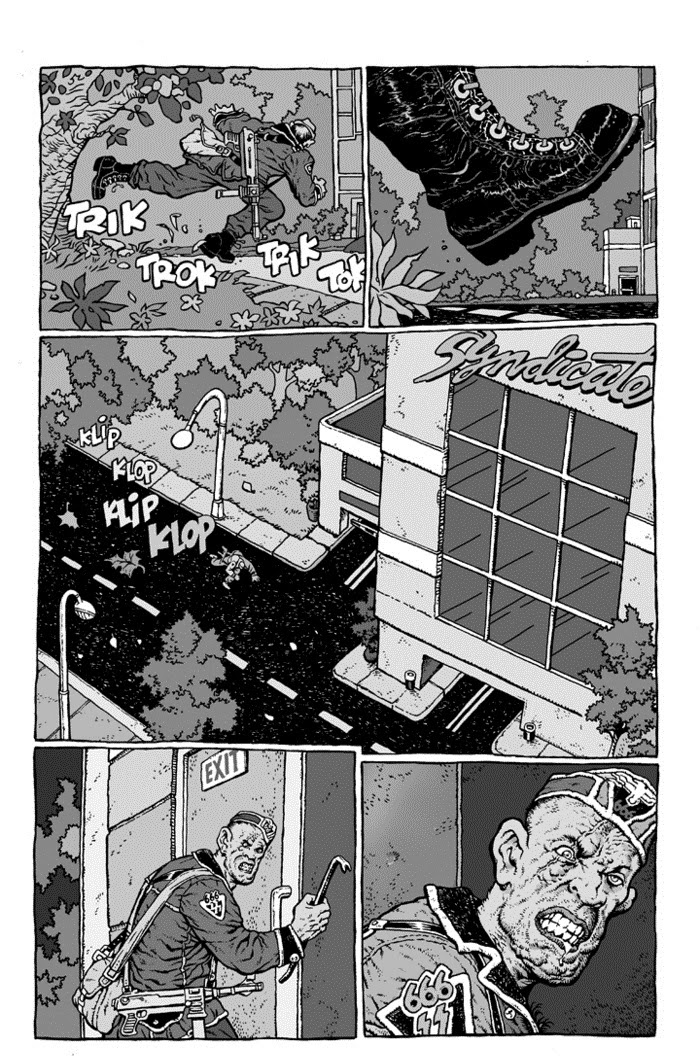 This is a comic I would call extremely enjoyable. Whether enjoying the stronger storyline in this issue or admiring the always-impressive artwork, "Fearless Dawn: Eye of the Beholder" is another great entry in the "Fearless Dawn" mythos by Steve Mannion.
4.5 out of 5 stars.

An Interesting Publisher
Asylum Press is an interesting publisher, having slowly put out a strange assortment of stuff ranging from horror, to sci-fi, to a bit of heroics. Lately they seem to have been ramping up more in their release schedule, be it with the guest editorship of the latest "Heavy Metal", or starting to put out more stuff in physical and digital form. I've read things in the past by them I didn't like, but these two issues were good, so that hopefully bodes well for the future too. I myself am interested to see what comes next from Asylum Press, and will probably always be especially eager for more "Fearless Dawn" if nothing else.
Posted by David Charles Bitterbaum at 9:02 PM