If You'll Allow Me To Explain 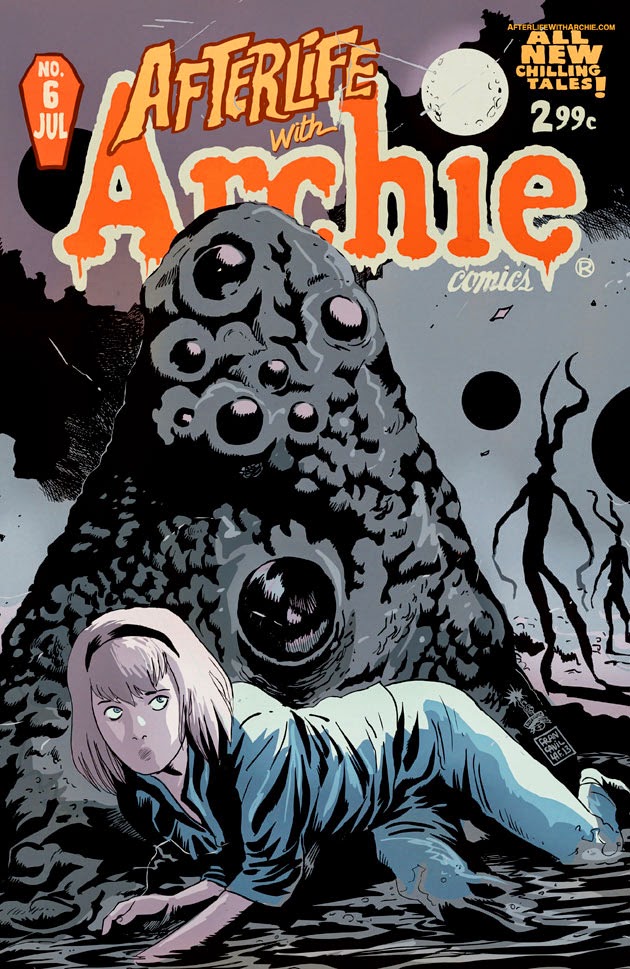 I really loved the latest issue of "Afterlife with Archie" that came out some weeks ago. It took me until recently to read it but once I did I had two major thoughts, "This is incredibly good," and "This really reminds me of 'Fatale', and is actually how I wish 'Fatale' had been." Should this thinking confuse you or seem weird to compare two seemingly very different comics I'll explain. Basically, its all about the creeping sense of horror.

So Much Tension That It Eventually Got Boring
"Fatale" featured a female protagonist named Josephine with scary powers (in this case the ability to basically mind-control men and recover from any injury whilst not aging) who was trying to escape from an evil cult that seemed to worship a variety of horrifying Cthulhu-styled creatures. It jumped around in time, and despite starting out promising I found myself growing bored with it. I ended-up quitting the comic around the point it had jumped-forward in time from what was arguably the "main" story to a tale about Seattle in the 1990's.
As I stated, it began quite well, with Josephine--also known as "Jo"--being interesting and a bit scary, yet also sympathetic. I've loved past works by writer Ed Brubaker and artist Sean Philips, so I was intrigued when I began the series. There was this sense of tension and foreboding...and then nothing much happened for a bunch of issues. You can only have tensions ratcheting-up for so long without a release before people just get exhausted along with possibly bored, and well, with Fatale I became pretty bored. For all I know the last issue paid off in a big way and cashed-in expertly on all that led into it, but as it stands, when I remember "Fatale" I think of how it had so much tension that it eventually got boring, if that paradox makes any sense. Then in comparison we have "Afterlife with Archie" #6, i.e. how I want a comic to build-up my anxiety and then pay off on it.

Not the Kind of Dream Wedding Most People Hope For, But Delightful For A Reader
"Afterlife with Archie" has centered on a zombie invasion of the town of Riverdale brought about by Sabrina (The Teenage Witch) using magic she shouldn't have in an attempt to help Jughead bring his dog named "Hot Dog" back to life. After the first issue where Sabrina was banished by her aunts to a nether-realm the comic has focused on Archie and crew, with us readers only able to wonder what came of Sabrina. Well, the sixth issue of this comic offers a bit of an interlude from the goings-on in Riverdale and fills us in on Sabrina. Basically, she has been at an institution for troubled youth since the supposed deaths of her aunts. Clearly, something is amiss. 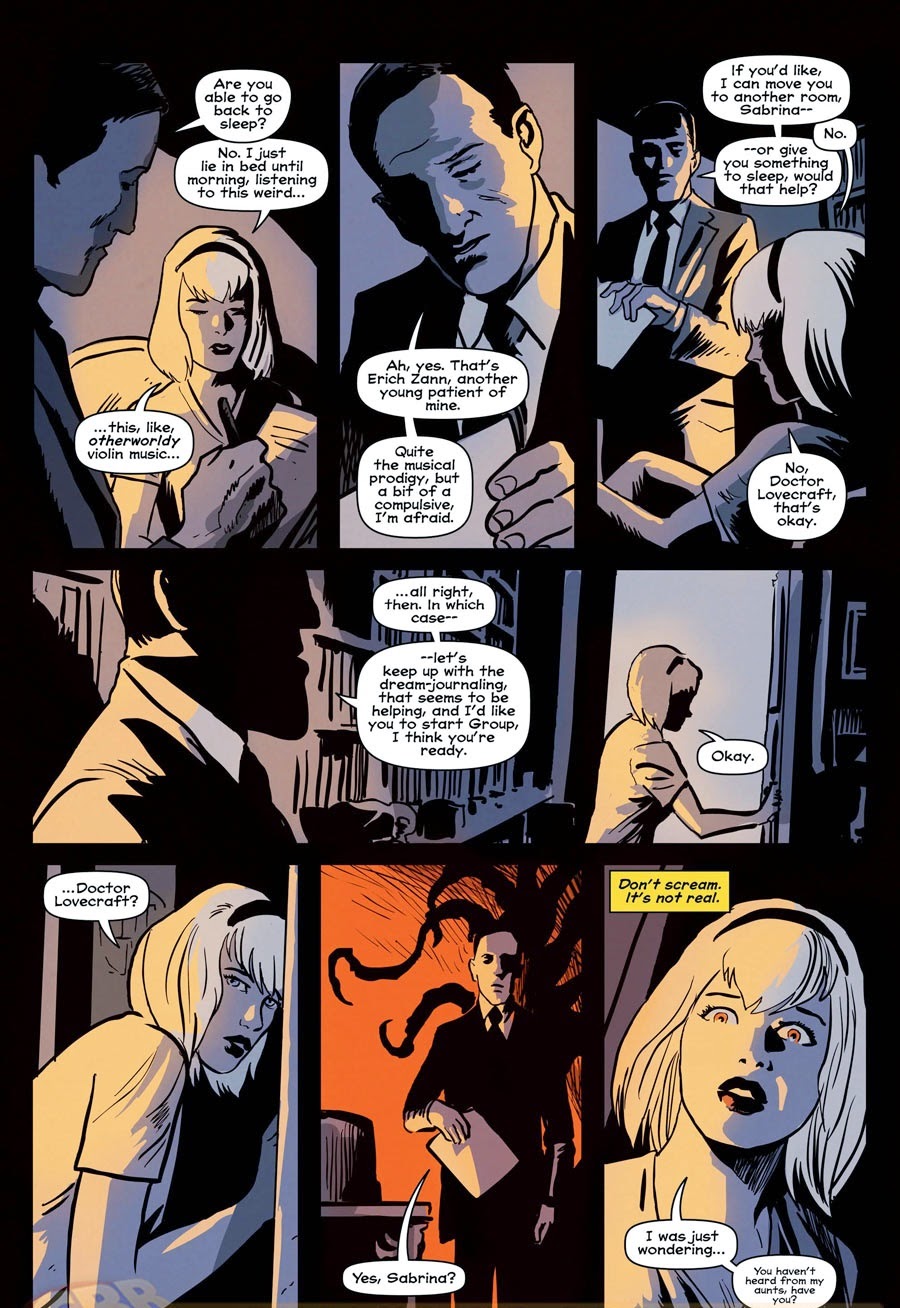 This may sound quite different from "Fatale", but in this issue there are many similarities. The issue features a female protagonist with scary powers (magic), who is trying to escape from a sort of asylum run by an evil cult that worships Cthulhu. See how that sort of links up? There are little things too, like how the motif in "Fatale" of people seeing creepy things for a split-second before "reality" sets back in happens a bunch in this issue of "Afterlife", which was in fact one of the first things that made me start thinking of "Fatale". From my noticing how this was like "Fatale" I started to see how it did something very well that I've made clear "Fatale" did not--the tension-building.

The issue opens with Sabrina describing a nightmarish dream to Doctor Lovecraft (see what they did there?) and continues from there as we see her in the institution. Sabrina is trying to figure out why everything seems off, and if this strange belief that she is actually a witch is true or some delusion--as she has been informed as such by folk at her establishment of forced housing. As the issue continues a sense of palpable dread and fear grows and grows until a heck of an ending where Sabrina learns the truth is she is a witch that the Doctor's snatched from the nether-realm and is to be the bride of none other than Cthulhu himself. Yeah, not the kind of dream-wedding most people hope for, but delightful for a reader. 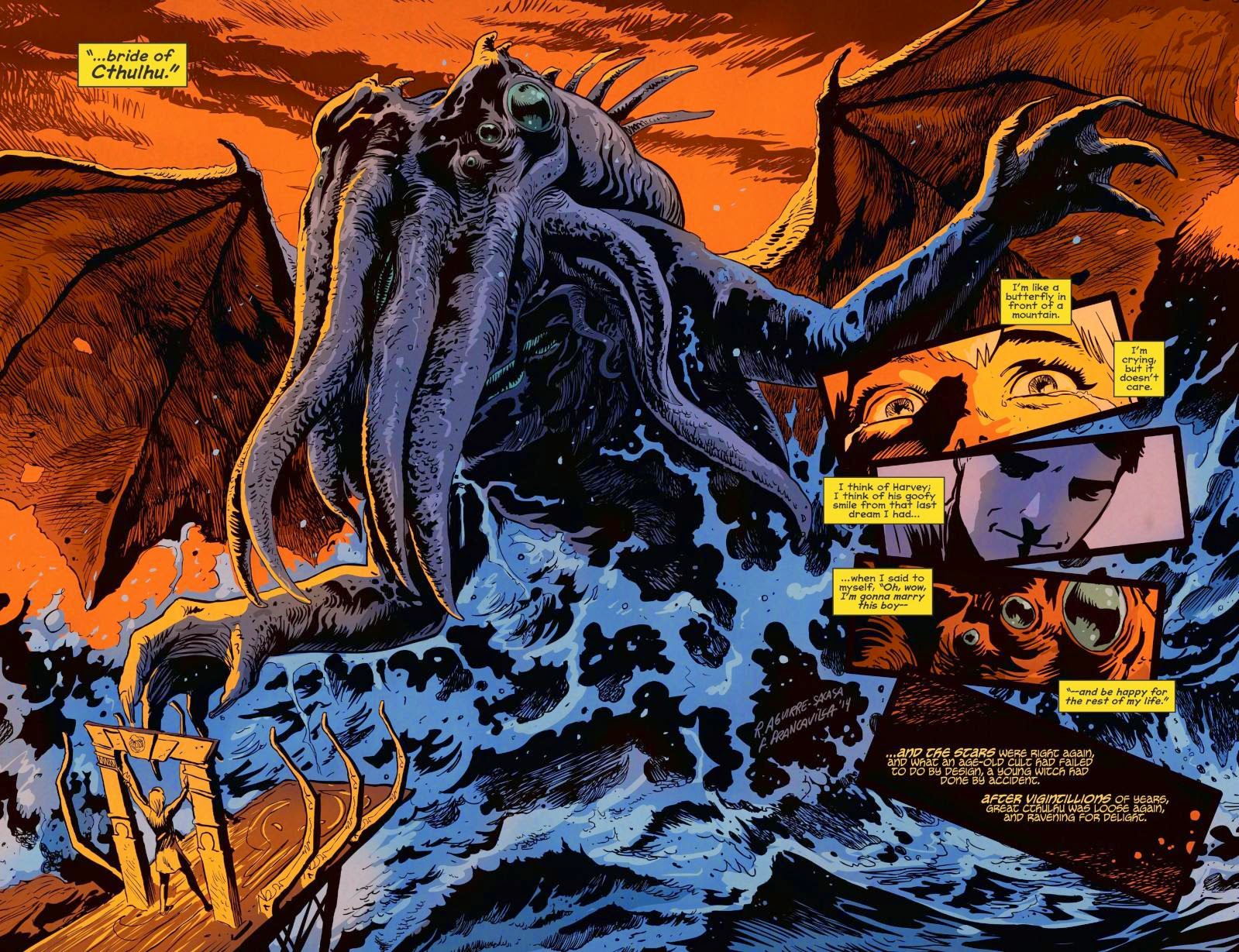 Whereas with "Fatale" I was putting up with issue-after-issue of a feeling of fear and trouble, nothing too big actually really occurred (yes, there were some smaller pay-offs, but not a "wow" moment like "Afterlife" contained). Meanwhile, in a single issue of "Afterlife with Archie", writer Roberto Aguirre-Sacasa expertly started things out with a creepy vibe, built up my worry and fear for Sabrina, and ended with a huge bang. If any issue of "Fatale" had been as good as this single one of "Afterlife with Archie" I probably would have gladly stuck with it till the end.

Top-Notch Stuff
I've sounded negative about "Fatale" but it was a perfectly good comic, it just got grating after awhile. At least the art in "Afterlife" is incredible thanks to Franco Francavilla, and Sean Philip's work in "Fatale" was top-notch too, so both books are beautiful; it just in the end comes down to the story the comics have been telling. While most of "Afterlife with Archie" has had more of a strange "Walking Dead"-type feel, this check-in with Sabrina was full-tilt Cthulhu and Elder Gods-styled. Therefore, trying to compare other issues of "Afterlife" to "Fatale" would be a bit silly, but works wonderfully for this issue.
This issue of "Afterlife with Archie" is a stellar example of an interpretation of HP Lovecraft, period, not just how I wish "Fatale" had gone. In the end they are very different comics, but I just felt like sharing how while reading the sixth issue of "Afterlife with Archie" I couldn't stop repeatedly thinking, "This is how I wish 'Fatale' had read." It may be unfair to Brubaker and Philips to write this as they were doing their own thing, but its just an observation I had and wanted to share with you all out there on the internet. As it is, this issue of "Afterlife" is my favorite thus far and just a great comic. I mean, when one comic is so good you wish other comics were like it that means something, I would argue. Anyways, top-notch stuff.

5 out of 5 (for the sixth issue of "Afterlife with Archie").
Posted by David Charles Bitterbaum at 11:36 PM