You know what might be fun? Reviewing some of those "DC Comics Presents," books, focusing on three that deal with Elseworlds tales/stories out of continuity.

Catwoman: Guardian of Gotham
I like Doug Moench a lot when it comes to his work on Moon Knight. Those early issues by him that I've read in some Marvel Essential's collections are phenomenal stuff (and even cooler in the black-and-white in the manner Essentials collections are printed as). This comic is about a world where Catwoman is a crime-fighter and a mysterious Batman shows up and starts committing crimes. It is not Moench's best work, but is perfectly passable. Jim Balent does his usual style--meaning we get females drawn in a cheesecake fashion (which is meh) and intriguing panel layouts. Yes, Balent may make his females look wayyyyy over-sexualized, but the man has a masterful grasp of the page and how to present art. Just look at how these panels are split up: 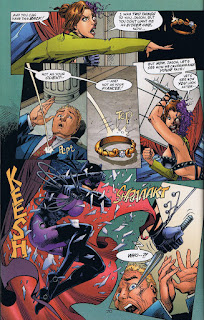 Yeah, both females have highly exaggerated breasts, but the way the thrown ring is shown, and Catwoman bursts through the window...it's striking. I often wonder how good a comic we could get if we took an artist who wasn't as over-the-top but paired him with Balent when it came to page break-downs.

The idea of a heroic Catwoman with all the sexiness in the comic turned up to the maximum level allowable in a non-mature-readers-way is cute and all, but the whole thing with Batman being evil, marrying her, and then suddenly deciding to kill her because he knows her secret identity but she doesn't know his is all done in an obvious way that's more dull than silly. I still enjoyed this more than a fair amount of other comics out there though, so it's all good. Whether that says this is actually quite good or too many of today's comics are terrible...I don't know.
3 out of 5 stars.

Batman: Gotham Noir
Let's review something else with Batman. Why? Well, because I feel like doing so, and this is no ordinary Batman comic. Yes, this has the amazing team of Ed Brubaker and Sean Philips--the dynamic duo behind such masterworks as, "Sleeper," "Criminal," "Incognito," and, "Fatale." They do a lot of stuff together, because they seem so in-sync that any story they work on is just great.

This story is basically about a good cop in the form of Jim Gordon solving a mystery while a strange man who seems inhuman, almost as if a bat, creeps around the edges of the story, affecting change where needed. This is really a story about Gordon that features Batman on the periphery, but when ol' Batty does appear he seems so intimidating and scary that the minimal use of him in the story is highly effective. Plus Batman is drawn in such a weird way, it's frightening. 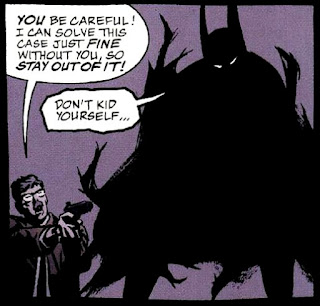 This is by not as amazing as some of Brubaker and Philips other work, but still greatly enjoyable and definitely worth a read.
4 out of 5 stars. 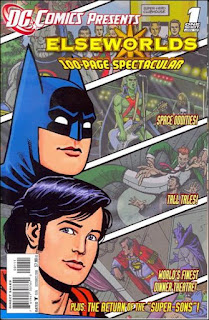 This collects a variety of fun and short Elseworld's tales including one that was controversial in DC's eyes some years ago about young Superman being babysat and causing all sorts of trouble. Apparently DC wasn't too big on a baby in a microwave--even if the rays couldn't hurt him. There is that fun story though, a cute, "Behind the Music" type bit, a Paul Pope Batman in WWII, and other good stuff. The only story I really hated was, "Dark Knight of the Golden Kingdom," which has pretty art by Ariel Olivetti (and its drawn, not his current painted-style!) but the most stupid story ever that tries to be all dramatic but comes of as just...lame. Oh well, they can't all be winners, and I did love that baby-Superman. 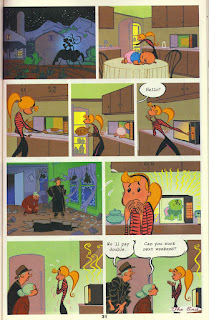 I enjoyed this collection, even if the stories could be hit-and-miss. It was still mostly an entertaining read however, and as I am always a fan of Elseworld's stuff you know I can't be too upset to get 100 pages of alternate-universe goodness.
3.5 out of 5 stars.

There we go, get to reading!

Posted by David Charles Bitterbaum at 10:13 AM