The Shade #1-7, The Mini-Run Review & I Bought A Digital Comic Of All Things

Weird and Entertaining Is A Good Description


Confession time, I've never read the famous Starman series written by James Robinson with much of its art provided by the stellar Tony Harris. I've heard how great it is, but those 50 dollar hardcovers just are too much for me (Yes, I will be picking up the first archive edition in softcover when it comes out eventually).
Apparently Starman has been some of Robinson's best work, and as a writer who can do incredibly good things or just plain afwul stuff (See: Cry For Justice) I wasn't surprised to hear his new mini-series about a Starman-series-related character named The Shade was quite good. Maybe Robinson just has a knack for those characters, or when he enjoys what he's doing the man writes with his, "mad skillz," instead of like a hack, who knows? Whatever the case, I figured I would pick up the first seven issues of what will be a 12-issue maxi-series called, "The Shade", and in the process also did something I never have done before so that I could get one of the issues--I went digitial.


Yes, I couldn't find the 3rd issue of this series in physical form easily so I decided, "What the hey, I'll get it digitally at the slight discount DC does once their comics have been out for a bit." The process of reading it digitally on my iPad was...interesting. I didn't like any sort of, "guided view," that only showed me so much of the comic at once because I like to see it all, and double-page spreads were hard to enjoy when I held my device vertically. In the end, doing a normal view of the whole page or any double-spreads while holding my device horizontally seemed to be best even if when I was fully zoomed out I couldn't quite read the text. This resulted in me panning about and zomming in and out. It worked out alright but I don't think I'm leaving print comics anytime too soon. Anyways, on to my review of the comic itself.


Oh That Zany Shade
Shade is a weird fellow. He is no hero but not quite the villian. I like the shades of grey that introduces (sorry for the horrible pun, you may slap me now). Over these six issues we see the development of an over-arching plot of someone planning evil against Shade and his loosely-related family, be they genetic relatives he saved the lives of during World War II as we get to witness in issue #4 or forever-teenaged vampires he rescued (don't worry, this one doesn't sparkle or anything lame like that). In the process we see Shade talk with some friends, make a few enemies, and use his powers in clever ways. 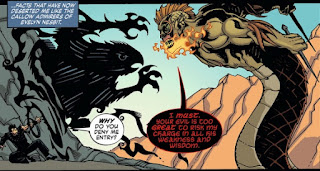 The variety of artists found to illustrate this series is quite nice. Cully Hamner and Darwyn Cooke all turn in stellar work to name a few, and the shifts in art actually fit changes in the comic's location, time, or tone, so it isn't a jarring sudden artist-shuffle such as with other comics.
The comic isn't too light or dark in tone, having both humor and some serious bits. There is plenty of talking but also action put in at just the right moments to break things up. Honestly, these are just some really well done comics. 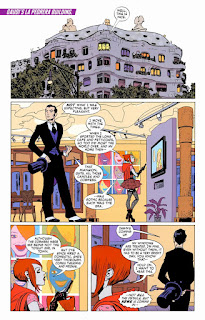 One odd thing is how this makes clear it takes place in the, "New DC," Universe at the end of the first issue with the appearance of a "popular" assassin, but other than that this feels like it could be in the old DC--and that's without mentioning the questions of how this could relate to the old Starman and its continuity which is firmly rooted in the, "Old DC," that now supposedly no longer exists. However, if that no longer exists than how can this and....oh dear, my brain has just exploded from trying to examine DC logically.
Regardless of any niggling continuity issues this is a stellar read and just a really great time. James Robinson has hit it out of the park as he is known to sometimes do when he actually cares about what he is writing. I would say you should pick up all these issues if you can, grab the first trade then the rest of the 12-issue maxi-series, or whatever it is you want to do, just read the stuff as it is delightful.
4.5 out of 5 stars.

Posted by David Charles Bitterbaum at 9:12 AM