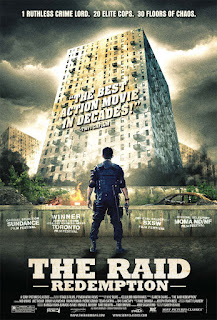 "The Raid: Redemption," is not a movie to pull any punches. It is violent, but in a beautiful manner. I would describe it as a ballet of gun-play and martial arts with blood erupting everywhere as if there were a fountain of the red stuff hidden away. The plot is one that is pretty simple, even though it tries to throw in some twists and such. You aren't really here for the plot though. No, you're here to see director Gareth Evans make a movie that is full of amazingly done fight scenes, bullets flying about, and the most clever use of a refrigerator I've seen in some time.

The gist of this movie is that a mob boss has a big tenement building no one has been able to take over, a bunch of police are going to come in and try to take him and his henchmen down, and this already sounds like a recipe for disaster. Things of course don't go as planned and lots of action ensues. 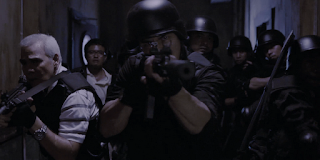 For those who love old-fashioned movies about cops and bad guys, or guys fighting hand-to-hand, this flick is like a Godsend. Yes, there have been movies that have done the whole Grindhouse style with a slight tounge-in-cheek effect (such as the actual movie "Grindhouse" and the movies it spawned) but this is in the style of those classic 1980s action movies and isn't trying to be clever or make fun of them in any way. No, this is just a straight-up love letter to the, "Assault on Precinct 13," type of movie.

I did quite enjoy this, but considering how after about less than 20 minutes things crank up into action mode and don't let up, eventually you just sort of get tired from constantly being on the edge of your seat--and at that point the movie still has another 15 minutes or so of crazy-action to give you. Yeah, maybe trimming a fight scene or two would have been okay, or giving us a few more breathers to lighten things up besides the very few quiet moments.
Other than the movie maybe needing to have been cut down from an hour and 41 minutes to a good 90 minutes or so, this is a dynamite production. Plot may be somewhat absent, but that doesn't matter too much, its the kicking and shooting that you came for, and that's exactly what you'll get. Just sit back, strap-in, and get ready for a wild ride.
4.5 out of 5 stars.