A Strange and Highly Enjoyable Film--Drive 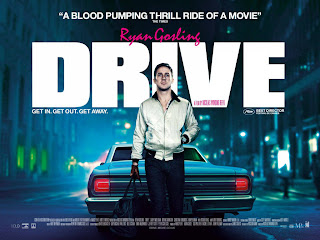 I saw Drive not too long ago. It is really a strange little film. I enjoyed it a lot, but it is so bizarre. I describe it as if an action movie were done art-house style. If you read a standard plot description it sounds like some sort of dull cliche flick about the mob, a man who drives well, a girl he has feelings for, etc. Then you see the thing though, and its just so different. 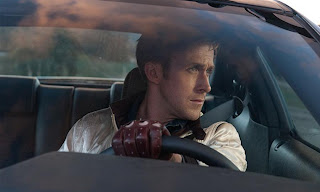 This isn't really an action movie. I wouldn't say that. Even the opening with its fast driving has a strangely subdued feeling. This is more of an arty-thriller. While watching the movie you almost always have this uncomfortable feeling about Ryan Gosling's character. He is a man who barely speaks, so little is known about him that we never actually learn his name in the film--he is just the driver or the kid. He has a scary intensity that seems as if he were pushed too far something horrible would happen. We see the first flicker of this in a restaurant when a man whom he did a job with in the past approaches him and starts talking--in the open like a total idiot--about a "sweet job" he has lined up. Ryan Gosling's character stares right at us in the camera as we don't even see the man, and tells us to shut our mouth before he kicks in our teeth and shuts it for us. The man says it was nice to see him and gets the hell out of the restaurant.

The only time Gosling's character doesn't seem to make the viewer feel this unease is when he is spending time with his neighbor and her son, and seems to be genuinely happy. These brief quiet moments let him actually smile and seem like a normal person, and then that oddly retro music kicks in.

The music at times reminds you of the 1980s, there are these bizarre moments that make it seem like a weird art film with this loud synthesizer going off. The music sometimes sounds more standard, such as when after the bubbling suspense gives way to violence finally erupting--but its not fun. It's just brutal and gory. Not the kind of gory you get in horror films, the kind of gory that feels uncomfortably real, making for a strange counter to the at times almost surreal and floatly feeling you get in the movie when those short happy moments take place. I said the viewer has this scared feeling around Gosling, and it is wise to know that emotion, because when the violence does start to occur in the movie, Gosling moves in a way that is just terrifying. He drives for action movies about tough guys who don't even do their own stunts but is the toughest guy around capable of killing with brutal efficiency.

We know so little about our driver man, yet Gosling makes him so fascinating. That scene in the elevator, that goes from soft and romantic to brutally grotesque almost instantaneously, is done perfectly by him. He carries that moment with a soft gentleness before again becoming the scary machine of violence his character truly is, resulting in a witness to his brutality only being able to back away as he stares at them with eyes saying, "You think I'm a monster? I've known that forever."

The supporting cast is superb, Bryan Cranston as a car repair-shop owner, Ron Perlman as a mobster with a chip on his shoulder, and Albert Brooks in the polar opposite of his usually humorous roles. Everyone is on top of their game.

This film is tense, brutal, and a bit scary. It's basically a study of a man we only know about through his actions, and those actions vary from the extremes of amazing kindness to homicidal depending on if you cross him or not. In lesser hands this would be a silly action film, but this is some great movie-making right here.
5 out of 5 stars
Posted by David Charles Bitterbaum at 10:08 AM