Dragons, Aliens, Space, and Magic
When science-fiction goes really out-there it starts to feel a little like fantasy. You're far enough in a desolate future that technology is either gone or so advanced it feels like magic? Yeah, I'll call that similar. It seems the creatures are what makes the difference sometimes. Fantasy has elves, dragons, and trolls. Sci-fi has aliens, weirdly evolved creatures, and both genres seem strangely fond of huge bugs.

I've played hours upon hours of a video game called Skyrim that is quie emeshed in fantasy. It's amazing and has won game of the year for 2011 from countless people for good reasons. I also have read the first two issues of the re-launch/re-interpretation of Prophet, some hard science-fiction. The thing is, Prophet at time can almost seem so out-there as to be a type of fantasy, and both it and Skyrim are intriguing in their own unique ways. They also impart their own morality. 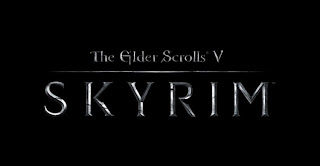 So Much Adventure, And Never Told I'm Good or Bad
I'm a bit under 100 hours of playtime for Skyrim after numerous months of off-and-on adventuring. There are countless things I still haven't done, major cities I haven't even visited, and a main quest that remains unfinished. I probably need another 200 hours to get close to doing everything I want to accomplish in this game. It's an amazing thing, what they've put on this disc, but the Elder Scrolls series always has been known for quality, so that isn't too much of a surprise.

One thing that takes this game a level above other great RPGs by Bethesda such as Fallout 3 is something I didn't even notice at first until Edge magazine pointed it out. There is no, "morality system". The game doesn't tell you you're being good or evil. Yes, people will run and scream if you commit a murder in front of them, or call a guard if you steal right under their nose, but do something without being seen and you don't get any special message. No alert you lost or gained karma. It's just your own personal conscience. I hadn't fully registered the game wasn't telling me I was being "good" or "evil", but there it was. It was like real life where you could take an action and the only thing you really had to deal with were the consequences if you got caught--and of course how you felt about it. I had no remorse killing those annoying spiders however.


I had been acting under complete moral freedom without fear of a "karma system" or such locking me out of certain quests, followers, or game features...and I had been kind of a goody-two shoes. Except for a few personality flaws I was pretty much angelic. I almost always only killed when I was attacked first unless I knew the person was a bandit or wild animal which would try to kill me, and I helped anyone with a problem who had a task. True, I was a huge kleptomaniac when it came to books and  took any new ones I found even if they were marked as being owned by someone else. I also loved alchemy and had been making so many new combinations of ingredients and potions, which wasn't really evil or nice, except for the fact I didn't use the poisons on anyone innocent.

I suppose I should be relieved  when put in a world where I can act out any way I want I pretty much am just a nice guy except for a weird book obsession--possibly mirroring my love of comics, except I buy those and don't pirate them like some folk. Regardless of what my play-style means, Skyrim has been pretty amazing so far and with its lack of a system to inform you that you're "right" or "wrong" it truly is an open-world game full of shades of grey in terms of good and evil.
5 out of 5 stars.

The Morals of a Post-Apocalypse 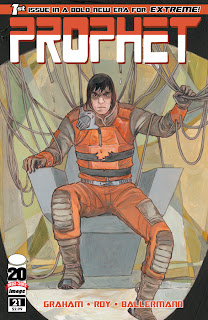 In Prophet #21 there is a scene where our hero, John Prophet, eats what is essentially the meat of descendants of humans. He has a mission that seems to involve trying to restore humanity, but in the process won't hesitate to use some good ol' fashioned pseudo-cannibalism too. Then again, what choice does he have in this nearly unrecognizable future? There are strange creatures with unique ecosystems, technology that is incomprehensible it is so advanced...its almost like a fantasy comic except for some bits of familiar electronics and the fact we are told that this is in fact the future.

What a harsh future it is, however. Over the course of the two issues of #21 and #22 (which are actually the first, this is a re-launch/re-interpretation of sorts) our hero has to fight, kill, work, and struggle just to move along on his adventure slowly--and he makes pretty much no friends along the way (not counting an alien he "mates" with in a scene we thankfully don't see considering how hideous this alien is) but plenty of enemies. Many reviewers have compared this comic to old-school Heavy Metal--the comic magazine and not the genre of music. I agree as before the magazine devolved into little more than tits and ass with some gore sprinkled throughout it would have unique sci-fi and intriguing stories not unlike this (I know, as I've seen some old issues of Heavy Metal in discount-bins and they were quite good compared to the mostly-dreck that gets put out now).

This is "adult" not in the sense that its sexual, because it is really not, or violent--although it has plenty of that--but in that it has a bleak outlook on life one seems to develop as they reach a certain maturity in life. As the optimism of childhood gives way to the cynicism of teenage years and the stark realism of adulthood. The morals of Prophet are not that of being a good or bad person, they are of being someone who is alive or dead in a harsh ecosystem where pretty much everyone has a predator. It's a depressing and visually unrecognizable world, yet one with an emotional core not unlike that of our current time where everyone seems to at times be trying to take advantage of someone else economically, by forcing their morals on them, or just physically assaulting someone. It's depressing, but in the end not that far-fetched.
4 out of 5 stars.

A Closing Conundrum
As Skyrim illustrates sometimes morality can only be measured by a person's own feelings, when the game doesn't deem them good or bad the true grayness of the world becomes apparent. Prophet #21 and #22 show a world that has little to no place for morality, as when survival is the main thing on everything's mind what's right and wrong become expendable concepts. One world is a fantasy land the other is that of science  fiction, but within both any sort of "true" morality is itself a fantasy or fiction. There is no golden standard to measure what is right or wrong. Only the player in Skyrim truly can judge what they feel is good or evil outside of the bit of jail-time they do if they get caught committing a crime. The mission of John Prophet is all that matters and there are no moral issues on the way to achieving it. If Prophet does what he thinks could be a "good" act it seems to be more because he needs to get closer to accomplishing his mission and not because of some silly concept like "rightness".

Perhaps as the series Prophet continues the main character will develop a type of morality that stands out in the harsh future, and perhaps when someone plays Skyrim and injects their own beliefs of good and evil into their character they turn that fantasy into something real and tangible, because if they believe it, isn't it almost as if it is a part of the game too? This leads me to my final conundrum however. If there isn't truly morality until John Prophet develops it, or unless a player of Skyrim believes in it, does that mean morality really is just a social concept? Morality isn't something tangible that can ever be measured in a game and is in fact just something we created? The concept of absolute good and evil is wrong and things are subjective? Perhaps, or am I just reading way too much into a video-game and two issues of a fun comic?