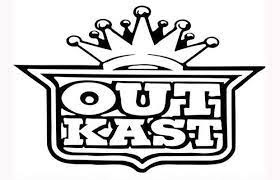 Andre was mostly tired of rapping. Big Boi wasn't. They were working together on some songs but both had a bunch of stuff they had done by themselves. Instead of making two solo albums, however, it was decided to release a double album. That resulted in OutKast's biggest album ever and the best OutKast album that kind of isn't an OutKast album at the same time. 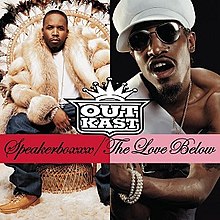 September 23rd, 2003 marked the release of this beast of an album. 39 tracks if you count the interludes/skits. It was an astounding enterprise that almost everyone loved. It is one of the very small numbers of rap albums to win, "Album of the Year," from the Grammys, not that the Grammys really matter as we've all discussed. Big Boi's, "Side," of the LP, "Speakerboxx," is more southern hip-hop goodness we are accustomed to with a great blend of party-rap and conscious-rap. Andre 3000 gives us something quite different with, "The Love Below," though. A surreal blend of poppy rock, jazz, funk, a dollop of rapping, and tons of sonic experimentation, "The Love Below," is jam-packed with amazing tracks as well as ones that aren't always astounding, but always interesting.

On, "Speakerboxxx," the album starts (after a little intro) with the wildly fast, "Ghetto Music," and only rarely slows down on that track to let you catch your breath. After that is my favorite song on the whole album, "Unhappy." It reflects on the difficulties of life Big Boi faced growing up but how his family always persevered through it. "Bowtie," happens and is snazzy, then Big Boi's first big single from the LP, "The Way You Move," is just a pure delight with Sleepy Brown's crooning contribution sealing the deal. Next, we get a solid mix of songs I won't detail as they are enjoyable but don't stand out in my mind a ton. That is, until, "Flip Flop Rock," with Jay-Z and Killer Mike just bringing the house down with Big Boi as they are accompanied by some fantastic piano riffs, beats, and guitar strumming. The late-album song, "Reset," is a delight too, and then after a few more tracks, the album wraps. Well, Big Boi's half concludes, in some ways we are just getting started as now it is time for, "The Love Below." 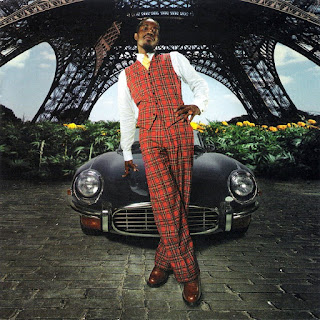 "The Love Below," opens with a lush orchestral score and Andre singing softly and beautifully. It lets you know you're in for something quite different than other OutKast albums. We segue into, "Love Hater," which is just a jazzy and energetic treat and after the, "God," interlude we have one of the small numbers of tracks Andre does rap on, "Happy Valentine's Day," a song about a modern-day cupid who is a little disaffected by love. It is a stellar track.  After the raunchy, "Spread," and another little skit we get to an absolutely stacked lineup mid-album. The endearing, "Prototype," about falling in love, "She Lives in My Lap," which discusses falling out of love, "Hey Ya!" and its discussion of messy relationships and, "Roses," with its angry thoughts on a just-ended relationship.

All of those songs are absolute bangers and, "Hey Ya!" dominated the radio for quite some time. After that mid-album assortment of masterpieces, the rest of the LP is solid. It takes till the end of the album for more amazing stuff to appear, however. We have a short little song, "Take Off Your Cool," sung with a just-starting-to-get-hugely-popular Norah Jones, the surreal and experimental, "Vibrate." The album closes with a long monologue-rap on, "A Life in the Day of Benjamin André (Incomplete)," where Andre 3000 starts to tell the story of how OutKast started. It is immensely listenable and gets up to around the release of the 2nd album, "ATLiens," or so. I still hope we get more of this story in the future as Andre even labels it, "Incomplete," in the tracklist. 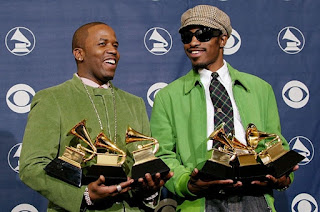 "Speakerboxx/The Love Below," is an amazing double LP. Is it, "Truly," an OutKast album? I would say yes but feel free to have your own opinion. It sold tons of copies, won a bunch of awards, and could've been the perfect final album from OutKast. It wasn't though. We got one more release in the form of, "Idlewild," a flawed but beautiful work. I'll discuss, "Idlewild," in my final post of this segment next week.