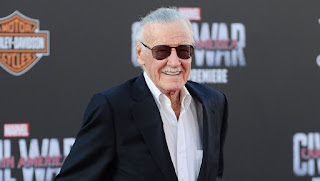 Stan Lee, one of the last living greats in the field of comic-books, has died. We recently lost Ditko, Kirby left a awhile ago, Eisner is no longer of this world as well, and it seems the people who had a hand in the creation of some of the biggest comics/properties ever leave us more often than ever due to age and illness. I of course wrote many a time about my complicated feelings regarding Stan Lee, and had expressed concern about his recent treatment by those who were supposed to be looking out for his best interests, but the bottom line was that Lee had his fingerprints so deeply ingrained in the foundation of super-hero comics it would be impossible to imagine what we have today (in terms of movies, merchandise, and modern-comics) without his contributions.

I've already seen posts online deifying him as some kind of God who could do no wrong as well as hot-takes decrying him as a terrible and shitty person. He of course was not an artist, he was a writer, and people debate whether he contributed a ton of the effort or barely any work behind some of the greatest creations he and his collaborators made, with the truth undeniably being somewhere in the middle. The big thing with Lee though was how he was a natural showman. The guy practically bleed charisma, enthusiasm, and was generally just a super-fun person you wanted to listen to. His ability to promote the art-form of comics in the past decades before they were as accepted by the mainstream as a form of entertainment, "For more than just for kids," is a contribution I personally feel could not be overstated, regardless of people's personal feelings about the man or how much work he did in comics. Stan Lee has died and I am sad. I will miss him.
Posted by David Charles Bitterbaum at 5:02 PM