Tales From The Dollar Bin: Ted Naifeh's "Heroines," and the Gruesome Fate of Space Goat Productions

Another Time I Was Wrong

This story has many elements and gets weirder as we go along, but bear with me--the basic idea is I was wrong about something yet again (it happens sometimes). Back in the Summer of 2017 I sang the praises of a publisher by the name of Space Goat Productions Inc. when they announced they were making a, "Retailer Advisory Board," which would allow comic retailer to speak with the publisher about how sales of the comics were going, their suggestions, etc. I thought it was a cool idea. In the Fall of 2017 it turned out the CEO of Space Goat--a guy named Shon Bury--was allegedly a horribly mean man who liked to sexually harass female employees, oh and a number of Space Goat Kickstarters that had been funded for two board games (one for, "Evil Dead 2," and the other for, "The Terminator,") had been horribly delayed. The company launched a Kickstarter to make a collection of the earlier issues of a comic they had published three issues of and include the issues that would've finished it. The book was, "Ted Naifeh's Heroines." I made a post about the Kickstarter which later failed, and in retrospect that maybe was for the best because odds are backers would've never received their rewards. Why? As I said, things get weirder.

The rest of 2017 wasn't kind to Space Goat as they quit releasing any solicited comics, and the start of 2018 heaped more money woes upon them because as the Summer of 2018 approached Space Goat tried to have people fund the company for promises of minimal rewards so that it could fulfill its promises to people who had already given it almost one million dollars on Kickstarter for board games they still hadn't created or sent-out. The idea was basically, "Hey, why not give us more money and we promise now we'll make good on our earlier promises?" It didn't go anywhere, and the company said it would explore other ideas. Then the Facebook and Twitter were abandoned a couple months ago and now promote random junk, the website quit existing and a warehouse that was holding a bunch of supplies for Space Goat is actually going to auction the stuff off because they quit paying their bills--that's right, Space Goat now is basically like one of those unpaid units on, "Storage Wars." Backers of the board games are furious, people are wondering what the Hell happened, and I just feel bad for Ted Naifeh as he honestly didn't do anything wrong besides partner with this shitty company for his decent comic I found the three published issues of in a dollar bin last week. 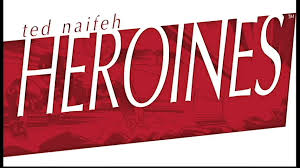 Ted Naifeh is a talented creator especially known for a comic he did with Oni Press, "Courtney Crumrin." From what I recall of press for the, "Heroines," comic when it was first announced, Ted had the idea for his comic focused on female superheroines putting-up with sexist male superheroes but knew Oni wouldn't publish it because as a sort of company rule they don't publish super-hero works. This isn't some kind of insult to super-hero books, Oni just figures they won't make money in the market with such a property, I imagine, and the closet they've come to something related to superheroes would be maybe that, "Vindicators," one-shot related to, "Rick and Morty," and that was more of a parody of superheroes than anything else. Anyways, Ted had a superhero idea, Oni was cool with him going somewhere else, and somehow he ended-up with Space Goat. How that occurred I do not know. I guess they offered him more money than another publisher who probably would've been happy to release the book like Image, but I can only wager guesses.

The first three issue of, "Ted Naifeh's Heroines," came out earlier in 2017, and when I saw them in the dollar bin last week at a store I was browsing I bought them and enjoyed them. They feature his stellar artwork and some pretty solid storytelling. The book is mainly about a young woman with superpowers who wants to join a mostly-male super-hero team and is belittled for it. She makes her own team of assorted powered women and they fight crime whilst uncovering a conspiracy about a rich businessman famous for funding lots of superheroes. It is entertaining stuff, although I was a little put-off by how he made a lesbian character super-masculine and super sexually-aggressive. To his credit, the character admits in the third issue it is a front she puts-up to avoid being hurt, saying if she acts like a tough masculine-jerk people can't pick on her for being gay for fear of her beating them up. I liked the three issues that came out in early 2017 and unless Naifeh can take the series somewhere else (I have no idea if the now-defunct Space Goat owns/owned any rights and if they are tied-up) that may be all we get. To his credit, Naifeh spoke-out against Bury's alleged behavior and said if the book didn't get Kickstarted he would take that as a sign there maybe wasn't a demand for it and would create other works instead, so clearly Naifeh is a class-act who got taken for a ride by Space Goat like much of us.

But, Back to Me Being Fooled 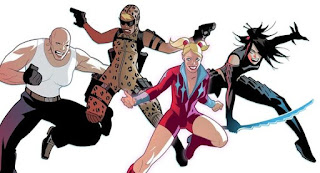 Clearly I was duped by Space Goat Productions Inc. when it came to thinking they were a good company. Shon Bury clearly is a sexual harasser with a mean-streak who also enjoys habitually lying, and as much as I would like to think they weren't trying to defraud people with their board game Kickstarters there are many red flags to consider when a company tries to raise money for a new game so as to basically use that money to also pay for the first, as I've read was apparently the idea. In order words, failure led to scamming. I was fooled, Ted Naifeh was taken advantage of, the many backers of the board games who will never see those products delivered were especially screwed-over and Shon Bury and his friends seem to have absconded with whatever money they could, leaving Space Goat Productions Inc. a rotting carcass. The whole story is tragic, leaves a lot of people ripped-off, and generally just makes me angry. In all of this a quite good comic by Ted Naifeh suffered as well, but I guess we can't expect too many happy endings when we're talking about a....tale from the dollar bin!