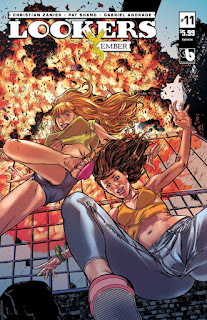 The 11th and final issue of "Lookers: Ember," ends as it began--having just the right mixture of self-awareness and self-indulgence to be a fun read. Published by the more cheesecake-focused imprint of Avatar Press, Boundless Comics, this series mashed-up two entites who had previously appeared in their own one-shots (Ember and the Lookers) into one surreal and interesting story. The Lookers are private investigators who specialize in helping women at risk of having private photos or videos leaked by vengeful ex-boyfriends/husbands, and Ember is a super-powered celebrity who can manipulate fire and utilizes that to achieve movie-stardom.

The focus of the series itself is how Ember has a sex-tape stolen of her and and a U.S. congressman, which results in a myriad of interested parties trying to acquire it from drug-lords hoping to blackmail the politician to so-called, "Men's Rights Activists," hoping to smear the name of Ember. Also, lots of graphically illustrated sex occurs between men and women, women and women, and so forth because this series had enough plot to apparently not have it be in the, "Adult," section of Previews magazine (besides some really risque covers) for people ordering it, but boy-howdy this book can be pretty raunchy. The weird thing about the mini-series, "Lookers: Ember," as well as the one-shots that preceded it that made me love it enough to consider it one of my favorite mini-series/maxi-series of 2017, is that it can at times be kind of genius despite at least half the audience probably just buying it for the T&A (which is admittedly very well-illustrated along with all the other story-elements thanks to the artwork by Gabriel Andrade and back-up story by Christian Zanier). 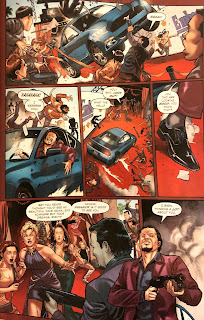 Every issue has been loaded with observations about internet culture/the digitization of of sex, sexism (the MRA group and their twisted logic are soundly mocked), and the idea is heavily explored how it is depressing to even think we would need people to be hired to help women suffering from threats of revenge-porn. It is becoming a more and more common news story these days as jilted exes purposely put private pictures and videos of women who trusted a partner enough to send private such imagery online for all to see in hopes of basically slut-shaming a woman for the, "Crime," of being a sexual being. Besides exploring a lot of concepts the book did interesting things with its storytelling too, jumping around in time enough that it wasn't annoying but instead set-up interesting plot twists. Plus, fun and weird characters were introduced like one finally taken down in this concluding issue, "Cobra," a sex-obsessed drug-lord who becomes absurdly violent after having his--ahem--member shot off by the Lookers--he then finds his only pleasure in life that makes him feel manly now is hurting others (a lot of psychological concepts to unpack there for sure). Much appreciation is due to writer Patrick Shand for such a well-written series.

"Lookers: Ember," has its characters often having sex, but it never treats the idea as something dirty, instead trying to shame the haters. It is a book that says being monogamous, poly, or any other configuration of a relationship one wants is fine, and if you say otherwise or are a jerk the Lookers will beat -up and/or Ember will quite literally burn you. There is just enough self-aware winking at the reader weaved into the series that you don't feel like you're reading some silly dirty comic so much as a cleverly sarcastic mixture of action, social commentary, and saucy romance. This final issue does all this and sets up the possibility of future storylines that has my interest piqued as well. This last issue of, "Lookers: Ember," is just as great as the first and the lead-in one-shots. I ecstatically rate it...
5 out of 5 stars.
Posted by David Charles Bitterbaum at 2:05 PM