The Season Finale of, "It's Always Sunny in Philadelphia," Did the Last Thing We'd Ever Expect--It Was Beautiful and Sincere

"It's Always Sunny in Philadelphia," has been running for 13 seasons now, with the finale for season 13 airing last night. The gang of Charlie, Dennis, Dee, Mac, and Frank (played by Danny DeVito who joined in the 2nd season) has always surprised viewers here-and-there with little funny twists or turns, but the whole point has always been that these are terrible, horrible people who are doomed by their own hubris to be miserable. Anytime something good has happened for any one of them it has been undone by their own actions, cruelly revealed to be a dream, hallucination, overdose on booze, or otherwise ended poorly . The characters may change a bit--Dennis becomes a dad, Mac came out as gay last season--but they never truly grow, they just stay stagnant and awful, which is where much of the comedy comes from. We viewers basically expect the worst from the characters of, "Sunny," and the worst to happen to them, so what could the ultimate twist be? Why, a genuinely deep, artistic, and human scene to end the season, with no, "Rug being pulled out," from us at the last minute, just pure raw emotion and beauty. Who the Hell saw that coming?

The final episode of this 13th season of, "It's Always Sunny in Philadelphia," focuses heavily on Mac and Frank. It is time for Pride and they need Mac--their, "Token gay," to ride on the float for the bar in a parade to hopefully attract customers who are, "High-spending gays." Mac is struggling though. He is out now, but isn't sure where he fits in the world as a gay man, or just a person in general. He still hasn't come-out to his Father whom he has always had a complicated and difficult relationship with. Frank says how he never got Mac--when he was in the closet or out--Mac's imprisoned Dad even says he never got his son (without Mac even telling him he is gay). Mac hints at an idea to show how he is gay, a complicated dance with a woman who represents God or an angel, he isn't sure, but that idea is seemingly written-off by Frank as Mac clearly having some complex issues with his Catholic faith and being gay. 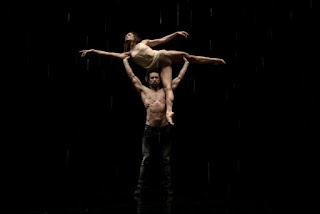 The episode carries on with Frank making crass comments about gay people because he's an old bigot (which he readily admits) and Mac seeming just down in the dumps. There are plenty of dumb jokes at the expense of the gang (the whole episode Frank is suffering a massive nosebleed from bumping into a door which he tries to stop in various disgusting ways) and it seems like nothing that crazy is going to happen, but then we reach the episode's climax. Thanks to Frank's money (a long-running gag in the show is that he enables the gang's bad behavior as formerly highly successful businessman), they are able to get the prisoners at the prison where Mac's Dad is incarcerated within an event-space for what is stated to be a Blake Shelton concert. In truth, it is actually a way for Mac to do something incredible though. He tells his Father, "Dad, I'm gay," with a nervous, quivering voice, then suddenly the screen goes dark. The sound of rain and thunder is heard (it is mentioned there was a rain machine for the parade float to explain this element) and then upon the stage it is Mac with a woman, doing a complex and beautiful dance in the rain, full of emotion, expression, beauty, and I was sitting there wondering if something was going to go wrong for some reason. I thought there would be a joke or mishap, but there wasn't. Mac's Dad gets up and leaves, but Mac continues the dance, and when he's done the prisoners cheer and Frank says with an bewildered and smiling visage--still covered in his dried-up nose-blood, "Oh my God. I get it. I get it."

This show, which for 13 seasons rarely gave the slightest hints at decency or happiness only to immediately destroy those glimmers of joy suddenly brings us viewers something astonishingly gorgeous and delicate, amazingly heartfelt, and it actually made me tear-up some. Is it some kind of sign that this far into, "It's Always Sunny in Philadelphia," it could turn a new corner with a well-adjusted Mac dealing with a still awful gang? Will this somehow be undone so as to not, "Break," the show or can, "Sunny," have a moment of genuine humanity that isn't then kicked in the metaphorical balls but allowed to just exist, admired for its vulnerability as opposed to mocked? I was utterly dumbstruck that a show so rooted in exploring the grimy and brutal would swerve into some kind of magical realism, with other reviewers appearing equally surprised. 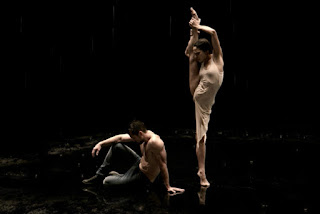 I've seen a mixture of responses to this episode online, with some folk cheering it as genius, touching, and amazing, whilst others have felt it was a jarring way to end the season completely counter to what the show has usually been like before. I clearly am of the viewpoint that it was great, doing something I never, ever, would have predicted and doing it in a way that mesmerized me. I guess it makes sense now why Rob McElhenney got so fit for this season, he needed to be in the best shape possible to do the amazing dance that Mac and the unnamed woman (played by Kylie Shea) perform. "It's Always Sunny in Philadelphia," is a show I've consistently loved during its stronger seasons as well as its weaker ones, but I never would've predicted it could have surprised me with something so raw and so lacking in the jaded cynicism the show normally trades in. If the show doesn't finally win a damn Emmy after this I don't know what it will take.
Posted by David Charles Bitterbaum at 12:47 PM