The STL Comics Summer 1 Day Comic Show is This Sunday! 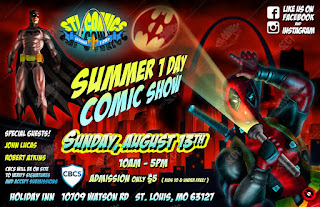 I of course am a fan of comic conventions, comic-shows, and basically any kind of shindig that involves comics! I have also talked before about how it can be annoying when you go to a supposedly comic-focused event and discover the con is full of random retailers (I've seen folk selling gutter-cleaning systems), or guests that have nothing to do with comics (like that time Tara Reid sat bored at her booth during a convention I attended). I don't mind shows that have comics as an aspect but not the focus, but sometimes you really just want to go to an event that puts comics front-and-center, you know? Therefore, a show such as the Summer 1 Day by STL Comics, which prides itself on being all about comics and related merchandise, sounds like something quite enjoyable!

The Summer 1 Day is--as the name implies--a show that takes place over a single day (This Sunday, August 13th) and it will be going from 10AM to 5PM. It will be in an event-space at the Holiday Inn on 10709 Watson Road in Saint Louis, and has free parking and a very reasonable admission fee of 5 smackers (with kids 10 or under able to attend for free). I spoke with the show and was excited to hear that there will be vendors from over 7 different states all with a variety of cool comics and local and regional guests with experience in the comic industry will be in attendance too. Also, the CBCS will be present and accepting comics to be graded!

I'm excited for the Summer 1 Day and will be there Sunday eagerly checking out the comic-goodness on display. See you there!
Posted by David Charles Bitterbaum at 10:43 PM