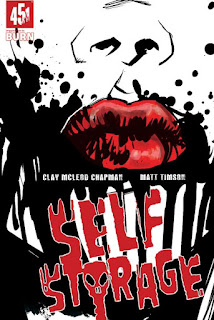 I read the first issue of, "Self Storage," from the publisher 451 some months ago and really liked it. I just recently saw that the trade paperback collecting the entire six-issue mini-series has been solicted in the newest August 2017 edition of, "Previews," for release October 25th, and that caught my attention. Therefore, I reached out to 451 and inquired if I could possibly have a digital copy of the entirety of, "Self Storage," for the purposes of review. They kindly agreed and I was able to read and enjoy the whole mini-series, which I found wonderfully twisted with a macabre sense of humor that tickled my funny bone just right.

The story centers on a young man named Chris Smith who makes a living buying-out storage units and selling their contents (think, "Storage Wars," to give you an idea). His girlfriend thinks what he does is, "Ghoulish," and his only friends are two other unit-buyers who he actually hates somewhat. Basically, Chris is a bit miserable. One day Walt, the owner of a big storage-establishment Chris frequents, calls about a unit that was paid for up-front for many years but which is now up for grabs. Walt has no clue what's in it as he knows better in this business than to ask questions. Chris buys it only to discover a strange zombie-woman is the sole occupant of the big space. From there the real fun begins...

Chris eventually learns the woman's name is Jessica and she clearly was experimented on by her scientist Father. Really, the whole, "Why," of the story is actually the least interesting part, and I would't have minded if there was actually more mystery to who Jessica is/was. It isn't a big element however, with the more entertaining madness that occurs being delightful in how dark and funny it is. Basically, Jessica is aggressive towards everyone but Chris and once she bites somebody they of course turn into a zombie too. Chris and his friends try to keep things contained, but you can't keep a good zombie down.

The foreward to the trade itself admits zombie-stories at this point are so worn-out it is hard to create something original with them. I think the author of the comic (and that foreward) Clay McLeod Chapman manages to make something pretty cool though, as this isn't a zombie story so much as a twisted love story between a woman who is quite literally dead and a man who is a little dead inside himself. The art by Matt Timson imparts gravitas to both the quiet and comedic moments as well as some scenes of shocking gore resulting in this creative team giving us a stellar read. 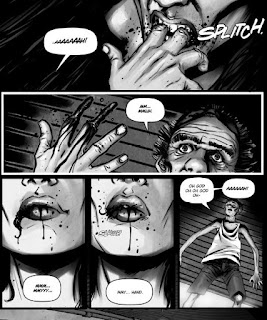 "Self Storage," is darkly hilarious and just a little bit sweet--when it isn't being really bloody at least. I quite enjoyed reading the entire story as a single collection and it can currently be ordered from the earlier mentioned August 2017 issue of, "Previews," by your local comic shop/preferred online comic retailer. Thanks to the enjoyment I gained from this comic I would rate it...
4 out of 5 stars.

You can pre-order the, "Self Storage," trade paperback (which I mentioned will be released October 25th) via Things From Another World, or if you want individual issues right now you can buy them at Mycomicshop.

Please Note: A digital copy of, "Self Storage," was provided for the purposes of review upon my request to the publisher
Posted by David Charles Bitterbaum at 6:17 PM