Sexy, Scary, and Fun! AKA "My Pretty Vampire," Review 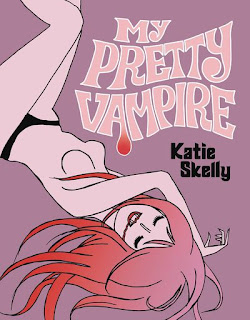 When someone does a story about vampirism there are a variety of angles they can approach it from. Do you focus on the violent aspects of a creature that literally drains blood? Do you play-up the sexy aspects of the vampire as a sort of predator who thirsts for actual flesh? I think the best stories incorporate a variety of concepts with vampires and Katie Skelly's, "My Pretty Vampire," is a prime example of that.

From its lighthearted title and arousing cover you can already tell this is a book that doesn't take itself too seriously and is loaded with sexy imagery. Skelly's protagonist, named Clover, never actually has sex with anyone during the book, but the way she preys on men and women to fulfill her bloodthirsty urges is shown in a very sexual manner. The story starts with Clover stuck in a huge mansion with her brother named Marcel and a tutor named Elsa, sick of drinking ox blood and wasting away her nights cooped-up. Early on she escapes despite Marcel's protestations that she could be hunted and killed and once in the city is overwhelmed (and overjoyed) at all the fresh blood just waiting for her. Through reading, "My Pretty Vampire," it feels like Skelly is possibly presenting a tongue-in-cheek portrayal of female sexuality. 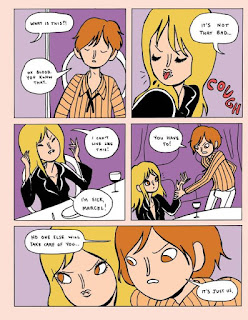 Clover is a young woman with urges who society wishes to punish for said urges. Clover is of course actually murdering people but there is a metaphor for how female sexuality is often treated as something to be ashamed of and never discuss--an urge which people claim would be destructive to act upon. Skelly basically is saying, "Oh, you think a young woman acting on her sexual urges is bad? Well, let me show you something actually terrible!" and giving us a violent-yet-fun read. I could be interpreting Skelly's intent completely incorrectly, but I think most would draw the same conclusions as me considering how historically vampires and sex have often had intertwined symbolism. 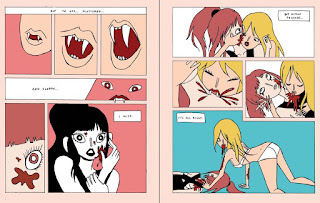 Were I to have any criticisms of, "My Pretty Vampire," it would be that the story seems to muddy itself a little with the introduction of an occult subplot/backstory that works to elaborate on how Clover became a vampire (basically Marcel didn't want her to die so he made a questionable deal) and the ending feels a little rushed, with a sudden climax and speedy denouement giving me a little narrative whiplash after the story's steady building of tension. Those quibbles aside I loved this book!

"My Pretty Vampire," is a lighthearted and erotic horror comic that pulls off the difficult task of being both impressively violent and good sexy fun. That is works so well is a testament to Skelly's skills as a creator. I've been a fan of Katie Skelly since I first read a comic by her in the, "Thickness," anthology and here she continues to show-off her writing and artistic chops. Should you want to buy a copy of, "My Pretty Vampire," for yourself you can do so via Things from Another World or of course Amazon. I would recommend you do so as I rate this comic as 4.5 out of 5 stars!

Note: A digital copy of, "My Pretty Vampire," was provided for the purpose of review upon my sending a request to the publisher, Fantagraphics, requesting a copy.
Posted by David Charles Bitterbaum at 2:53 PM