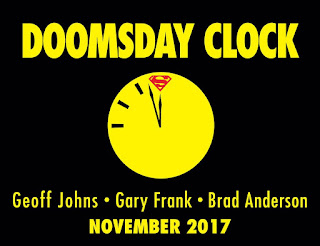 I absolutely hated the cash-grab ideas behind, "Before Watchmen," and when I first heard about, "Rebirth," and how it might incorporate aspects of, "Watchmen," I felt like DC had gone off the rails. Then, all the talented folk at DC surprised me by having, "Rebirth," be a re-launch that didn't suck. The careful way DC has incorporated concepts of, "Watchmen," has actually shown a lot of restraint and skill, and the newly announced, "Doomsday Clock," comic that will involve Superman coming face-to-face with Doctor Manhattan...sounds kinda neat?

Wait, what's going on with me? Haven't I said in the past, repeatedly, how DC loves to yell, "Fuck Alan Moore!" and insult his past work by diluting, "Watchmen," and his other works? Yes, I have done that, but in my article about how, "Rebirth," surprisingly didn't suck I said the one way that maybe, just maybe, DC could make incorporating, "Watchmen," go well is by getting really meta and focusing on how the creation of, "Watchmen," in the 1980's changed comics forever and impacted super-hero comics to their very core by bringing-in a more, "Adult," and grim-and-gritty focus that for decades books found themselves beholden to. Perhaps if DC made it less about, "Watchmen," as a comic than, "Watchmen," as an idea it could work. Well, it seems DC is actually doing that.

The idea behind, "Doomsday Clock," is to do a reasonable 4-part standalone series without a bunch of extraneous tie-in comics, which already sounds affordable as opposed to being an absurdly massive event-comic. These comics will focus on how the new bright hopefulness existing in the world of DC's Rebirth is going to have to survive against the horrific grit and misery of a world full of characters like, "Watchmen." That sounds pleasantly meta and self-aware in a manner of as if the stories in the DC Universe were a living thing dealing with the fact that for years upon years there has been an invisible influence of, "Watchmen," in comics, except now in a postmodern-twist the characters are aware of it. As I said, it just might be clever enough to work if its written well, which so far it actually has been. Plus, there are lots of real-world ways it almost sorta makes sense to go all-in on, "Watchmen," as of late.

Also, Gary Frank is providing artwork, so even if the writing does end-up being terrible at least the comic will look damn good.
Posted by David Charles Bitterbaum at 9:54 AM