"Far Cry 5," Will Be Walking a Precarious Tightrope in its Tone and Messaging 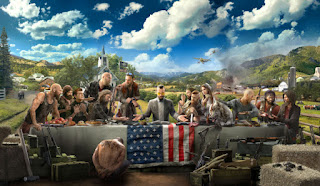 I've played many of the, "Far Cry," video-games on various consoles or the PC. I've enjoyed many of them. The more I hear about, "Far Cry 5," the more interested I get as well as feeling a ton of trepidation. In the game you go against a Christian Cult that has carved-out a bunch of land in a fictional Montana County, so yeah, a lot to take-in there. Is this a clever way of riffing on popular culture in a fictional-yet-highly-relevant way, much in the manner that, "Watch Dogs," attempted to do talking about technology but kinda failed at? Does this make sense in the era of Trump (even though they claim he has nothing to do with this), violent racism, separatism and, "State's Rights," all being thrown-around in dialogue eagerly by an alarming number of folk, or are we looking at just an empty marketing ploy bound to fall-flat?

This definitely is a bit of a change geographically. All the, "Far Cry," games have taken place in far-away locations defined by their tropical nature, mountainous design, or general distance from the U.S.A. Now we've got a game taking place right in America and seeming like it might try and be riffing on the concepts of God, guns, and the idea of patriotism. Video-games have touched on this before, with the more recent, "Grand Theft Auto," games trying to be one big satire of our Nation's obsession with firearms, religion, and what it means to be a, "Real American."  Facing these ideas head-on in a more serious and exploratory manner however, could that work? I mean, yes it could work, but we are talking about a series of games that haven't always been the best at political messaging, with many people feeling, "Far Cry 3," was one big mess of racist stereotypes (yes,
Far Cry 4," was better in this regard so there is hope). 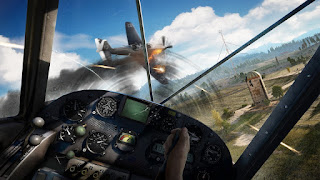 This is a precarious tightrope Ubisoft is walking, as they try to carefully emphasize how they aren't out to demonize Christianity (showing-off how you can recruit people like a Priest who fights the cult), how this has some basis in reality with their research but also is meant to be fictional, etc. etc. I worry in an effort to seem edgy but not, "Go there," we will get some watered-down junk that acts like it is making a statement but fails to truly do so. Then again, maybe we will get something clever, deep, and also fun to play (because at the end of the day that matters most, right)? Whatever happens, Ubisoft needs to be very careful to make sure they give us a game that makes a point, but also doesn't just go over-the-top in stereotype and idiocy, while also avoiding coming off as too soft and milquetoast about these matters.

So basically, "Far Cry 5," faces an impossible task as someone is bound to be offended regardless of the actual quality of the game. Oh well, at least we apparently get to fly planes in this installment, so that's cool.
Posted by David Charles Bitterbaum at 2:44 PM