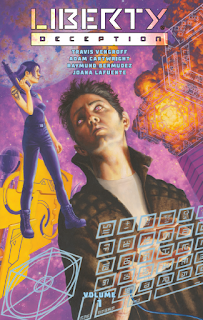 When I attended Wizard World Saint Louis recently I actually talked with the folk behind the comic, "Liberty: Deception," but didn't mention them in any posts as I completely forgot to take their information (fliers, etc.) which is how I always keep track of the people I interact with at cons. However, I had given them my card so when they reached-out to me about if I'd like to have a digital copy of, "Liberty: Deception," sent over for the purposes I review I gave them my standard spiel about how I'll express an honest opinion about the comic that may upset them but would otherwise welcome the chance to read some good indie-publisher stuff (I'm reading so, so much less of Marvel and DC  lately and love good independent works more and more). Hence, a digital copy was provided and I delved into, "Liberty: Deception." What were my thoughts? Read on and find out, obviously!

An Uncomfortably Possible Premise (Besides the Sci-Fi Parts) 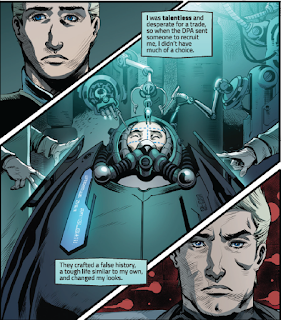 "Liberty: Deception," centers its story on a man named Tertulius Justus, an investigator for the Government of the terraformed planet Atrian. Justus is famed for his incredible combat skills, amazing deductive mind, and ability to make any lady swoon in seduced delight. Except, that is all a complete lie. Justus actually was just some underachieving kid who was given-over to the totalitarian Government by his parents in the hope he would have a better life. After that, the Planet's Government (controlled by the mysterious Archon Reeve who helped Atrian become as successful as it supposedly is) concocted an elaborate back-story for, "Justus," and made-up countless lies about his fighting for the people of Atrian when in fact all the television shows and stories about his exploits are utterly fake--he's just some actor pretending to be a planetary-hero.

There is something that feels uncomfortably possible about the idea that someone could be used by an evil Government as little more than a piece of propaganda, with their lies helping keeping the populace subdued and willing to ignore just how few rights they have because they are at least sufficiently entertained. This sort of thing has undoubtedly happened in a number of countries and the United States has had its own accusations of being dominated by politically-motivated media that is, "Fake news," as some say. I'm sure the team behind, "Liberty: Deception," had been working on it long before things got the way they currently are politically, but it just so happens their book has come out at a disturbingly perfect time that what once would have seemed far-fetched now feels nauseatingly conceivable.

It Only Gets Stranger! 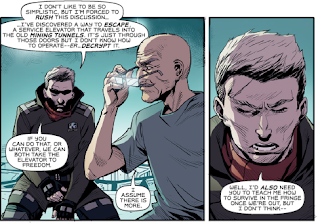 This disturbingly realistic idea immediately hooked me into the story and it only got stranger as Justus is suddenly fired from his job and then abducted with the plan clearly being to murder him--the story hints that the shadowy Government perhaps worries their star is becoming a bit too beloved. This takes our story to the prison where Justus was going to be killed before all the guards realize who he is and figure he must be doing a deep-cover assignment (a lie which Justus is only too happy to further). From that point on Justus assembles a group with some other actual convicts and they make their way out of the prison to the no-man's land known as the Fringe.

I enjoyed watching Justus and his rag-tag team escape from prison, but right as things got really interesting with more of the Government's motivations revealed and everyone making it to the miserable place known as the Fringe, the book reached its end until the next one comes out! This was a real downer as while I enjoy a good prison-break story I found myself even more interested in all the secret corruption and how God-awful the Fringe looked. In the story itself Justus states he knows he has zero clue how to survive out in the Fringe as all the stories about him are lies, so I especially would have loved to see more of how this faux-hero struggles when he actually has to fight for survival.

Thankfully, my thirst for more content set in the world of, "Liberty: Deception," can be sated as the good folk behind the comic actually also do in-continuity podcasts which tell cool stories about this sci-fi Universe. Plus, they also have a free role-playing game fans can do to create their own snazzy adventures! I personally like that this story isn't simply limited to a comic but exists in multiple formats for people to enjoy, as I am of course someone who loves creative concepts like this!

I greatly enjoyed reading, "Liberty: Deception," even if I found myself a bit perturbed that right when it really was getting going the story had to end on its cliff-hanger of wondering what the team will do next (or if they'll even survive in the Fringe long enough to make a plan). That said, I would rate, "Liberty: Deception," as a highly enjoyable...
4 out of 5 stars.

A digital copy of, "Liberty: Deception," was provided for the purposes of review.
Posted by David Charles Bitterbaum at 2:34 PM