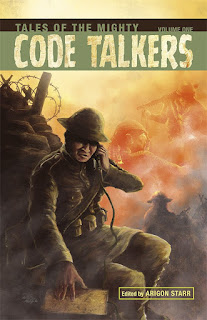 One of my friends bought a graphic novel at PAX this year that they really enjoyed. They reached-out to me as they know I do the blog and told me about it. That book is, "Tales of the Mighty Code Talkers," from the publisher Native Realities Press. Native Realities is made up of creators who aim to further the awareness and celebration of Native Americans and Native American culture. I feel this is an important mission as often in America it seems we only hear about Native Americans in history when it's Thanksgiving and get the cliche story about how the, "Friendly Indians helped the kind Pilgrims and they were all friends!" with the genocide and destruction that followed carefully left-out of textbooks. Native Realities' book, "Tales of the Mighty Code Talkers," is an anthology featuring historical fiction tales of Code Talkers throughout a variety of wars, and it sounded cool to me so I reached-out and was able to acquire a digital copy for the purposes of review.

I will admit my knowledge of code talkers was minimal. I knew that during World War II the United States dealt with the Axis powers cracking their codes by having a variety of Native American soldiers communicate over radio in their native language with even more code-words used to ensure secrecy (code-within-a-code). I also know there was a mediocre war-movie made that discussed code talkers, but that was about it. Hence, this book, which is geared more towards younger-readers (it has suggested further-education activities and resources too, which is cool), actually was perfect for an adult like myself who knows so little. Through reading this book and its assorted stories of code talkers I learned that Native Americans actually were engaging in this practice as long ago as World War I and were actively used past World War II but as technology advanced found themselves relied upon less and less until they were discharged and sworn to secrecy about their important contributions. 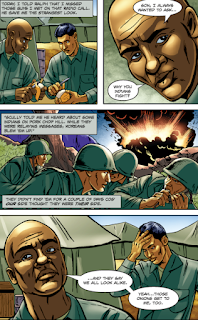 A straight-up illustrated history might bore some readers (I would like it, but not everyone would) so to the credit of the various creators who contributed to this anthology, the historical fiction we witness is often exciting and full of well-illustrated fighting and intensity. One question I myself had going into this book is brought-up for readers as well: Why? When I say, "Why?" I am referring to the question of why these Native American soldiers even wanted to fight for a nation that had treated their people with such hatred and disrespect. Seriously, during World War I many of the Native Americans who fought and died for America were not even yet recognized by the U.S. as, "citizens," spilling their blood for a country that wouldn't even let them vote.

The book offers various answers to that question, with it clearly being wrestled with by the soldiers who fought for a nation that refused to respect them (with one story featuring a Black soldier who bonds with a Native American trooper pointing out how there are many demographics that have been on the receiving end of horrific treatment throughout history in America). This isn't to say, "Tales of the Mighty Code Talkers," is some rage-filled manifesto however. There clearly is a love for this nation and a hope for what it could possibly be shared by all the men and women in the stories. 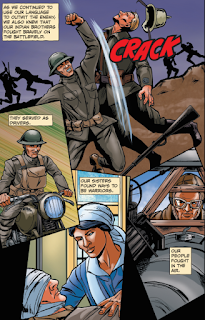 I found, "Tales of the Mighty Code Talkers," to be as informative as it was engaging. It kept my attention throughout all of its stories and provided me with a lot of history that often seems to be accidentally forgotten at best and actively ignored at worst. This book was a superb read for me, an adult slightly embarrassed to admit his ignorance of this fascinating part of history, and for sure would make a stellar read for schoolchildren to enjoy and then further their education with the aforementioned helpful resources and study-tips in the back of the book. Native Realities Press created a great book and I encourage you to purchase your own copy at this link.
5 out of 5 stars.

Note: A digital copy of, "Tales of the Mighty Code Talkers," was provided for the purposes of review upon my request to the publisher.
Posted by David Charles Bitterbaum at 2:47 PM