Reviews of Assorted Books I've Read From the Library 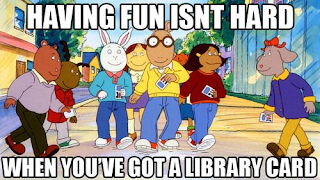 I like to check-out books from the library, as I have discussed before. Whether I'm getting physical books from the library itself or digital copies thanks to how my library system does Hoopla, I often enjoy these publications. Many are comic book-related, but not all. Here is an assortment of some I've read. I heard this comic involved Inhuman-business and was worried.I don't care about the Inhumans despite Marvel's best efforts. Thankfully, this comic is about  a pre-teen super-genius named Lunella Lafayette who just happens to have the Inhuman gene. The comic discusses how she is scared to be exposed to the Terrigen mist that transforms people because she doesn't want to have to put-up with being an Inhuman. He fears of having to deal with Inhuman-ity mirror my own, and I'm happy this comic is moreso a fun all-ages romp than it is the latest attempt by Marvel to shove Inhumans down our throat.

Featuring Lunella AKA Moon Girl, and a time-traveling Devil Dinosaur, the focus of the comic is actually about how Lunella struggles with being different (she's a literal super-genius) and has to come to terms with either being herself and fitting in, or being unique and standing-out. Her parents try to be supportive but just don't understand, just like her teachers, and basically everyone else besides the time-traveling Devil Dinosaur she meets. The new, "Totally Awesome Hulk," I've heard about shows up, but besides that and discussion of the Terrigen mist (and thankfully little-to-no talk about why the mist is flooding the Earth due to lame Marvel events) everything is pretty self-contained...I mean, putting aside the comic is dragging the Devil Dinosaur from some decades-old comics into the modern day, but I have zero knowledge about him and I followed the comic fine.

This was a good read with Lunella being a sympathetic protagonist and the bond she forms with the Devil Dinosaur seeming legitimately sweet. I liked this book a lot and am interested in seeing where volume 2 takes everything.
4 out of 5 stars. 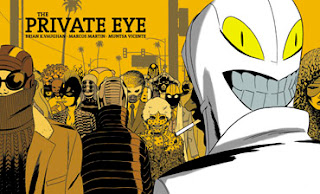 Brian K. Vaughn is of course a fabulous writer (almost everybody loves, "Saga," and his multitude of other works) and Marcos Martin is a stellar artist. They came together to make an internet-only comic about a future where the internet is no more due to it one day revealing the secrets of everyone and necessitating we all take-up secret identities. Within this world a P.I. takes up a case that turns into am murder mystery and things get more and more complicated in ways that are as humorous as they are darkly fascinating. The story was happily collected into a book that replicates the wide-screen style of the comic by being quite short and wide. It's a snazzy format and results in some lush imagery to compliment the superb writing. I'm a sucker for stories about the future and technology so I was already, "Sold," on this comic before I even started reading it. The fact it is fantastic only helps in my adoring it. Stupendous stuff!
5 out of 5 stars.

Domesticated: Evolution in a Man-Made World 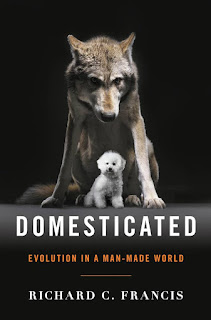 I'll be honest and tell you I didn't read all of this book as it came due at the library and I haven't re-checked it out yet. That said, what I did read of Richard C. Francis' book was extremely interesting. It basically discusses how when an animal becomes domesticated, it has actual biological features that change with it over time, with it all tying together. We as humankind have domesticated a variety of creatures (and as the book also discusses, we have domesticated ourselves) and basically our control of nature has resulted in some interesting creations, from a long-running science experiment to domesticate foxes that over more than a half-century has showed some astonishing results, to our old friends the dog and cat, humans have done some fascinating things with nature. I maybe haven't read all of the book, but I've loved what I have read and hope to finish it in the nearer future.
5 out of 5 stars. 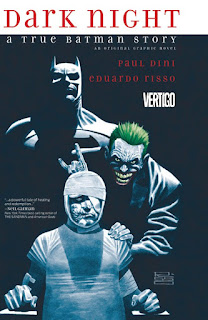 Paul Dini and Eduardo Risso give us an autobiographical comic by Dini about when he was brutally assaulted and robbed one night during his time working on the, "Batman," animated series. Dini is painfully honest which is admirable, talking about how his own past self-destructive tendencies to drink too much, date women who only are interested in him for career-advancement, and even at one point self-harm. Dini discusses how with his active imagination growing-up and continuing into adulthood, during his recovery from the brutal violence he faced often he would have the characters from the Batman cartoons and shows, "Talk," to him. He makes it clear these weren't hallucinations he lacked control over, but his own mind trying to process the horrendous beating he took the best way it knew how.

Dini's past comic and television-work has already proven he is a master storyteller, and Risso's illustrations are always welcome be it on, "100 Bullets," or his past, "Batman," work. The heart-breaking moments Dini faces make us really feel for him, while his admittance of not being perfect and at times behaving pretty poorly towards others proves he knows he's got some flaws of his own that needed work. A solid read with some awesome art!
4.5 out of 5 stars. 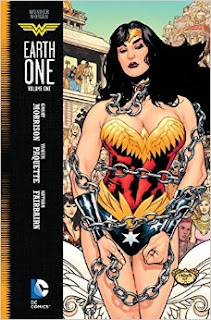 Another DC book not in the, "Regular," continuity but this one of course isn't autobiographical but instead a long-awaited book by Grant Morrison and Yannick Paquette. I love Morrison but this is a bit of  misfire. In his effort to provide a mixture of camp but also look like he's making some deep statements on feminism and race the whole book just kinda falls apart, quite badly. I mean, much props to DC for allowing Morrison to acknowledge the sapphic-themes people have often ascribed to the character and without hesitation acknowledge she has had female lovers, but this even comes off as a faux-progressive, with Wonder Woman at the end confirming she wants to live in the, "Man's World," and be with men--kind of almost reminding me of the weird theme of Batman, "Curing," Catwoman of her lesbianism in, "The Dark Knight Rises." To be totally honest, it's a pretty shitty story.

Putting aside how Morrison really let me down with this comic (which is surprising as I love most stuff he does) at least Paquette absolutely nails it with the artwork. His layouts and the spreads are just incredible, with the imagery astounding my eyes as they darted across the pages and back over them again due to how fantastic it all appears on the page. Paquette saves the book from being a complete bummer and it makes me sad that Morrison failed so much writing a character he has done a fine job with in past DC-work he's been on. Oh well, at least that's some snazzy artwork.
2 out of 5 stars.

Vargic's Miscellany of Curious Maps: Mapping Out the Modern World 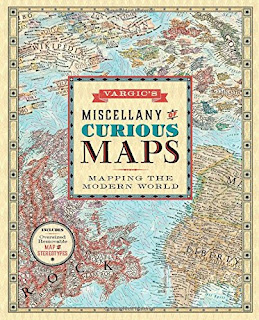 When my wife saw this huge book and asked what it was about I told her it was a big collection of maps. I realized this sounded kind of odd in our era of being able to access an atlas on our phone so I then clarified it was a book that used maps as a metaphor. That description is an apt one as this cool publication has both fictional maps that create a symbolic geography of subjects, and replications of the real-world with interesting data overlaid. There is a massive map of stereotypes that breaks-down all the cliché and offensive things that pop into the minds of people when they hear about a particular location in the world, there also are imaginary maps that show the landscape of the internet when it comes to video-streaming, more fact-driven maps such as ones that break-down the legality of cannabis or prostitution, and plenty more incredible geographic illustrations that are just wonderful.

Hours could be spent pouring-over the highly-detailed large and medium-sized maps, and the smaller ones are pretty cool too. If you want something that takes an older art (map-making) and incorporates intriguing discussion of new technology and stats this a great book to read. I would highly recommend giving these maps at least a once-over!
5 out of 5 stars.

Thanks Again to my Library! 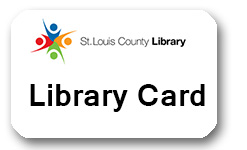 Thanks again to the Saint Louis County Library system for all the great books!