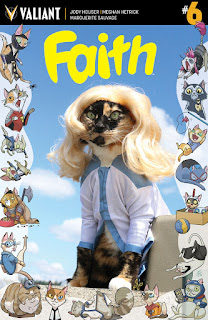 I used to not really be a cat person. Then my wife and I adopted two of the sweetest cats ever that defy every all the stereotypes of cats being standoffish assholes. While I still know plenty of cats that are jerks, having two felines I proudly call by, "Fur-babies," has given me a bit more of a soft-spot for kitties young and old.

Therefore, when I got a press-email from Valiant today announcing they were going to be releasing cat-themed cosplay covers featuring felines dressed-up as their characters all I could do was exclaim, "Holy fucking shit, this looks amazing!" I felt so excited. I was in the middle of a grocery store standing near a lady with some small children when I screamed those obscenities, so it was a bit awkward, but I still stand-by my initial statements. 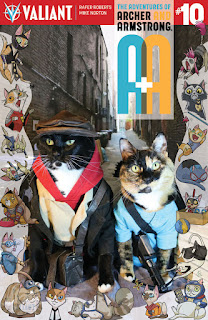 The official details can be found in an article on Comicbook.com where is is detailed how Valiant teamed-up with the website known as, "Cat Cosplay of the Feline Variety," to make these awesome covers--which will have a chunk of proceeds go to the Brooklyn Animal Rescue Coalition. Valiant won the internet today, no question. Now my wife and I need to make sure we get every single one of these adorable covers.

On another note, keep your eyes peeled on the blog for an upcoming interview with a cosplayer of the human sort!
Posted by David Charles Bitterbaum at 2:50 PM