Introduction
Today I feel like discussing something that I always find interesting. Namely, when someone who generally seems to put out bad comics somehow gives us something really good, and  the opposite where someone who normally creates amazingly wonderful pieces somehow produces a steaming pile of trash. For this article I think I'll go with someone who has almost always disappointed me, J. Michael Straczynski, and his inexplicably really  good (at least at first) "Supreme Power" 12th issue and the usually delightful Grant Morrison and one of his rare misses, "Happy" and its 2nd issue that at least hinted at something better hidden in the muck. 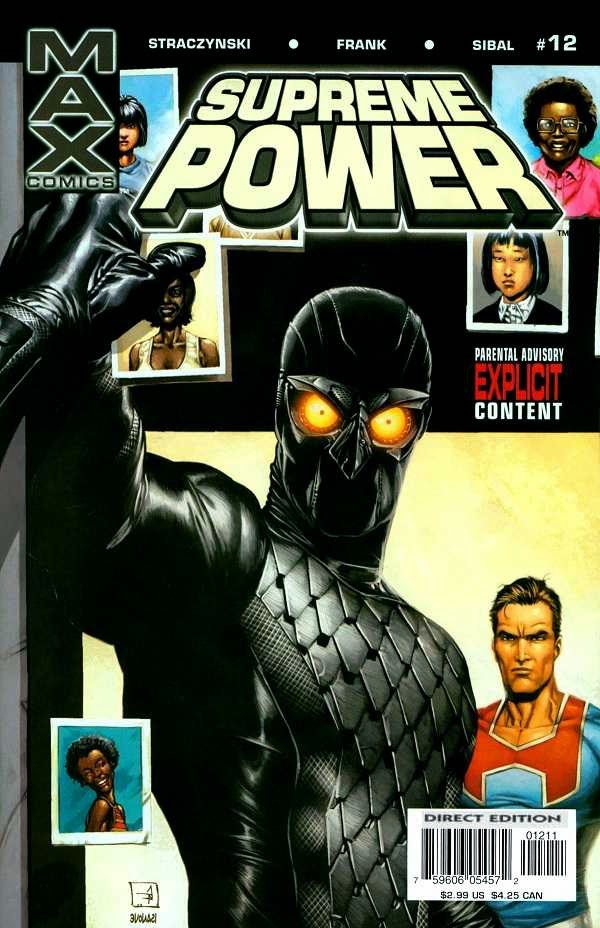 You know that famous issue of Watchmen where the first panel in the comic is a mirror of the last panel and the entire issue does this trick up to the center of the book where the two middle pages are a perfect opposite of one another? Yeah, this isn't that incredible, but probably is my 2nd favorite example of the comic medium being used in a unique way to tell a story that is impossible in any other format.

"Supreme Power" was basically a series that took the idea of the Squadron Supreme and put them in a much more realistic world (our world, at least until things went off the tracks later on) and examined how it would react to these super-beings. It started out amazingly great, before petering out at its final issue #18, having some decent-to-subpar mini-series, and then becoming an utter mess when it quit being a Marvel "Max" title (meaning there couldn't be swearing, the heavy-yet-realistic violence, etc.), before finally reaching a sort-of-acceptable conclusion some years ago in a mini-series written by Kyle Higgins. So yeah, a spotty history with various writers, but the best stuff is without question found in the original series written by JMS, with the highlight being this issue, the 12th. 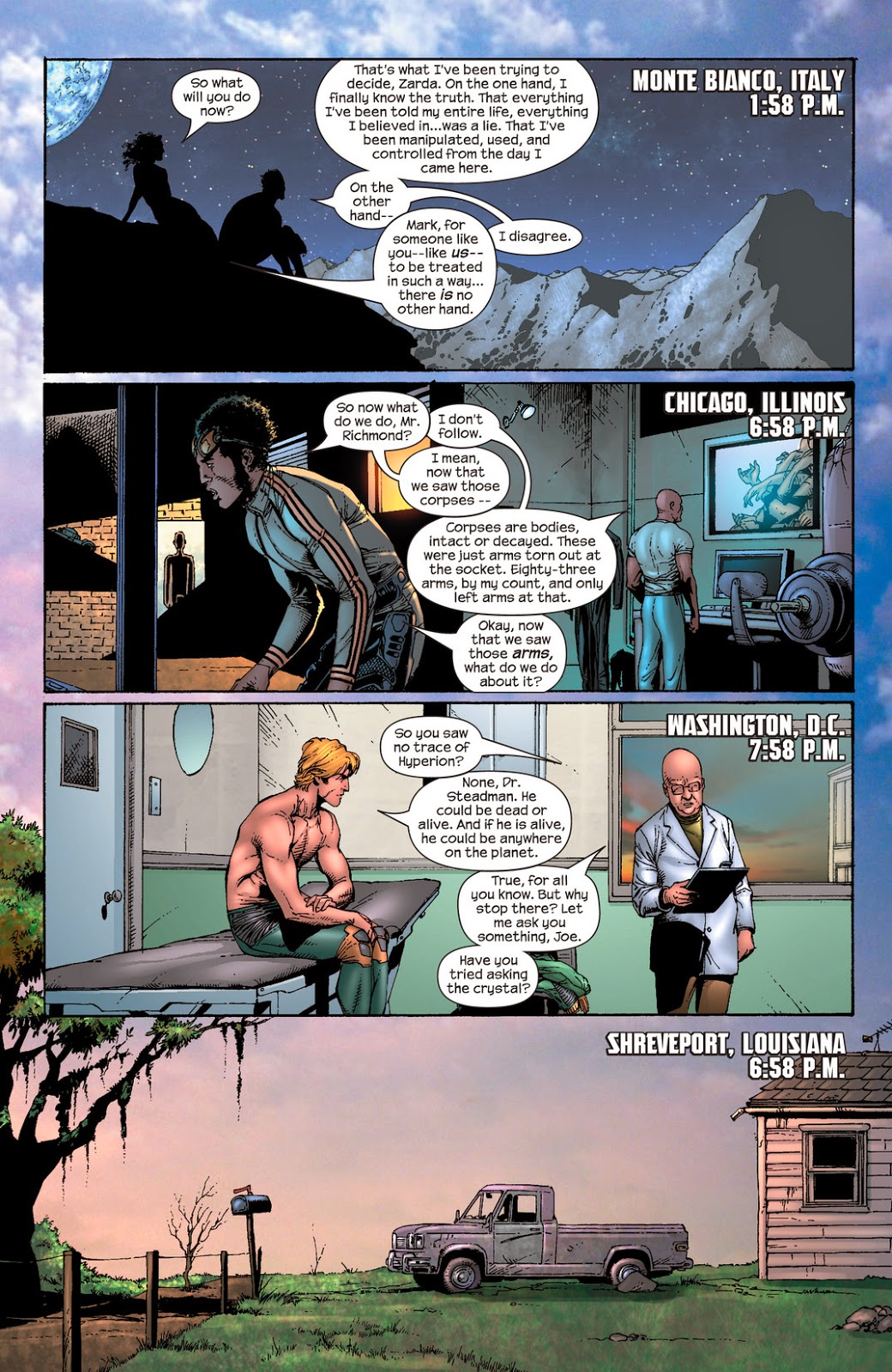 Even if JMS seemed to run out of ideas by issue #18, here he is firing on all cylinders and using a level of skill in his writing that we haven't seen since with his other work--be it things that started out interesting but became awful ("The Twelve") or stuff that was an abomination from the start (his Superman run and mostly anything else he's written). The thing that makes this issue work so well is that it focuses on four different stories, all happening at the same moment throughout the world in its various time-zones. This results in some panels being quiet for a long period of time, while others have a bunch going on. Characters in one area of the story may move into another or just disappear altogether for a period of time, and it all fits the purpose of just what the title says, giving us some ominous tidings of the trouble that lies ahead for our heroes as they prepare to face a mass-murderer with power-levels that make him a huge threat.

When I see other work by JMS and compare it to this earlier piece in his bibliography it makes me wonder if he somehow suffered a sort of traumatic brain-injury that inexplicably only damaged his ability to make a good story, because how could something as good as this also come from the guy who gave us a Superman that allowed factory to keep producing toxic pollution and then subtly threatened his then-wife Lois Lane (it was before the New 52) with violence if she reported about it? Yes, that really happened. Whatever the case, this is an amazing comic from an at one point great series, and it boggles my mind that JMS made it. 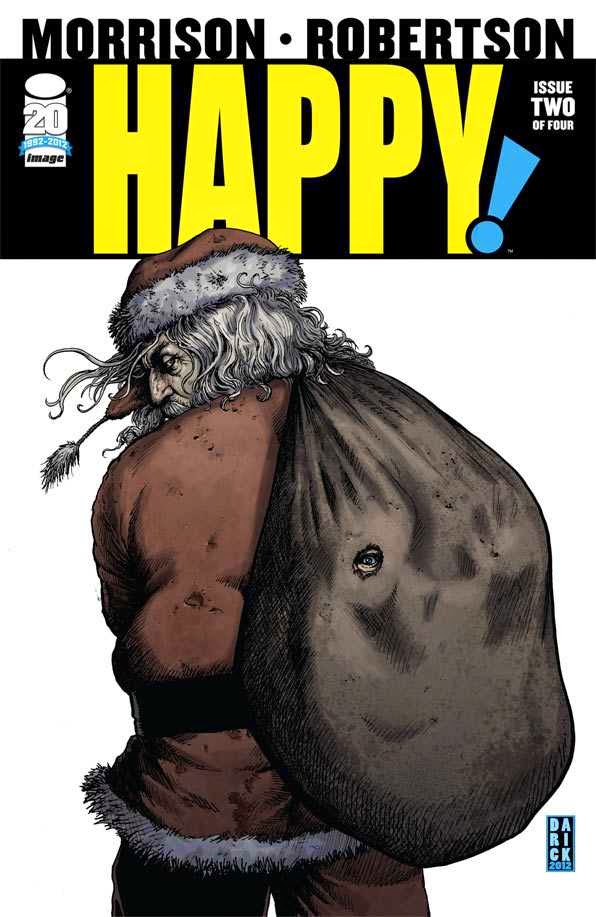 I've discussed the series "Happy" before and how awful I thought it was, and time has not softened my position as feeling it is the worst of Grant Morrison's works. Basically it was the kind of comic you get if Morrison were to try and do something "edgy" with a bunch of swearing, violence, and sexuality but failed--so if Morrison were attempting to rip-off Garth Ennis but forgot to include all the craft and hint of heart and sentimentality that Ennis brings to his work. I'm not joking when I say that either, as Morrison even got Darrick Robertson to illustrate "Happy", an oft-collaborator with Ennis.

"Happy" is about a Hitman who gets on the wrong side of the mob during Christmastime, has to try to survive everyone hunting him down, and somehow has a magical donkey-with-wings appear to help him rescue the daughter he never knew he had who has coincidentally been kidnapped by the very same group of mobsters (if I recall correctly) to be in some weird pedophilia-themed sex-film with a drugged-out Santa. Yeah, that plot sounds kind of like a mess full of unpleasant elements that it would take good writing to make stomachable, doesn't it? Well, Morrison turns in work that is of the quality where you'll throw-up, so I'm sorry to hear if you had a tasty lunch before you tried reading  this series because that will have been a waste, a messy, messy waste--just like this comic. 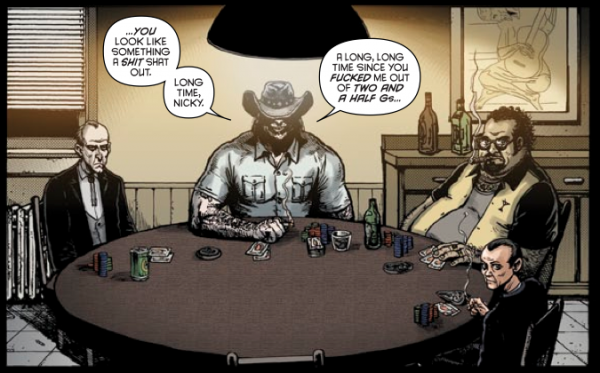 The one (count'em one) scene that hints at some of that Morrison magic, that creativity that has given me some of my all-time favorite comics such a "The Filth" or "All-Star Superman", involves our protagonist getting involved in a poker game where everything gets all meta with a discussion of what reality is, and how fiction can in essence become real through our efforts or such. Other than that the series is absolute poorly-written junk, though.

When I flip through "Happy" it doesn't even seem like a Morrison comic (except for that one scene that hints at what the comic could have been) so much as the work of a hack who thinks that aping Ennis' ability to throw in swear words and extreme violence is all it takes to be as good as him--and while Ennis may often dabble in unpleasant and gross topics, he does it with an ability that is startling and basically impossible to replicate. Why Morrison felt the urge to make this comic escapes me, but whenever I think about his work I like to pretend this series just never happened. It's easier to pretend the pain didn't occur than dig-up old wounds.

Conclusion
I'm not sure if I had much of a point with this article other than to point out even the worst creators can sometimes turn out something amazing and the best folk can at times give us something really, really bad. Perhaps I guess I'm just pointing out even a broken clock is right twice a day (with JMS being a broken clock) and a working clock can at time go on the fritz and be terribly messed up (AKA Morrison with "Happy"). Whatever the case, you can't always count on a creator to deliver, and other times someone you underestimate might just surprise you with something really good--it is just that neither of  those events will occur that often, as overall I'd still rather read something by Morrison than JMS any day of the week. You just never know when something will come out and shock you with its quality or lack-thereof, however. You truly can never know.
Posted by David Charles Bitterbaum at 11:26 AM