"Benson's Cuckoos" Is Both Hilarious and A Tad Suspensful 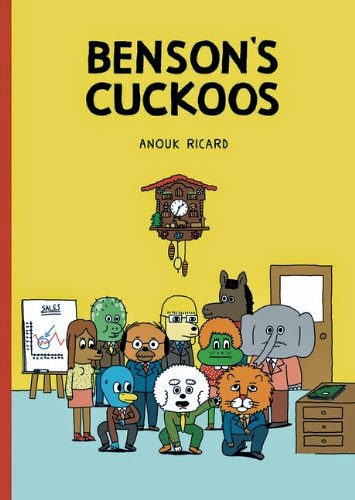 "Benson's Cuckoos" is a great book. Written and drawn by Anouk Ricard (with translation from French-to-English by Helge Dascher), I really had a great time reading this. Ricard might be known to you for her kids' comic "Anna and Forga" (published by "Drawn and Quarterly" just as this title is) and this book continues her use of human-like animals as the story follows the life of a duck named Richard. We open with Richard as he interviews for and then starts his job at a cuckoo-clock factory where things are a bit...off. The boss, Mr. Benson (A poodle), is a eccentric to say the least between his fondness for strange hats and a mood that can turn on a dime, and while Richard is under the impression he is simply replacing an employee named George who quit, a news report about how George has been missing says otherwise.
There is a style of humor in this book that I've seen compared to "The Office" with the strange people who populate the factory and weird boss apparently being like that program. As I've only caught maybe 2 episodes of the American version of the show I can't really comment on that, but can say that I was highly amused by the events of the book.
Richard also has a romantic interest in the form of a lady-dog named Sophie who is sweet but not given as much character development as I would have liked, along with some other employees whom I would have hoped to see more of. However, some characters not getting as much attention is fine as the underlying mystery of just what happened to George creates a bit of tension in the book as it becomes clearer and very obvious that something which could be dangerous for Richard is occurring, but there is no way of knowing just what it is and who poses a threat.
Clearly this title has an art style that is cute, but this is by no means a book for children. There is some swearing, animal-nudity, violence, and otherwise a clear indication that despite looking adorable these anthropomorphic office-workers are anything but cuddly. I like the slight disconnect between the art and tone however because it gives everything an extra dose of the avant-garde to see these sweet-looking animals behaving like terrible human beings.
"Benson's Cuckoos" is a stellar graphic novel and one where Anouk Ricard shows that she is not only a great writer and illustrator of works for children, but also someone with a wonderfully mature (yet still enjoyably silly) wit. Other than some characters seeming a bit underdeveloped I really did love this book and would highly recommend you check it out.
5 out of 5 stars.