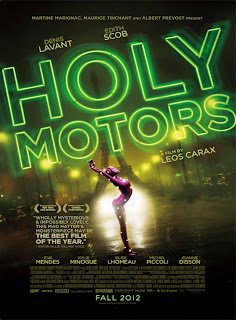 A bit ago I watched "Holy Motors" via the magic of renting and downloading movies to your PlayStation 3 (I lack Netflix due to how I wouldn't watch enough movies to make me feel I'm getting my money's worth). I watched it with my girlfriend and she felt it was too French in a bad way while I felt it was too French in a very good way. I was tickled pink to see Warren Ellis had seen the film and basically felt the same way I did. Namely, confused, intrigued, and a little bit mesmerized.

Holy Motors is about....well, that's kind of unclear. Basically a man named Oscar (played expertly by Denis Lavant) exists in this world where he is hired to play out various roles, from upset father, to weird monster-man, to an assassin and the man attacked by the assassin (its a weird scene). Basically director Leos Carax has said he had multiple ideas for movies and this was a way to explore them all.
So, is this film about a future where people watch a man somehow performing various roles? Is this film more a comment on the act of making a film and a tiredness with cliche (In one scene Oscar's boss talks with him about Oscar seeming to be losing a joy for his work)? I'm not sure, it is just an interestingly odd little film. Plus, one good thing is that if you don't care for one vignette it won't be too long until another happens. It is so full of symbolism with a person wondering just what exactly is being symbolized.

I enjoyed the film, with its odd little quirks, and would recommend viewing it to anyone who is patient with odd little flicks that don't reveal what their "point" is so much as giving the viewer all kinds of ideas as to what could be going on.
3 out of 5 stars.