Penny For Your Soul Volume 1 Review 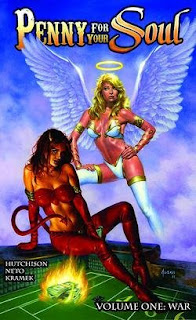 This is an interesting read. The basic plot is that the granddaughter of the devil has opened a casino in Las Vegas (with the help of Mary  Magdalene) and is buying the souls of people for ten thousand dollars. If you're worried this is some kind of religious-comic trying to impart biblical lesson let me assuage your fears--this isn't that in the least. What we've got here is a comic that is quite darkly humorous and not afraid to "go there".

Before I say anything else about the comic let's get one thing out of the way first. Yes, the art is extremely cheesecake styled. I don't mean, "occasionally," cheesecake either. I'm talking, "Anything with two XX's for chromosomes is drawn as sexy, and a fair amount of the time scantily-clad." While I've grouched about this is the past (see my ripping-into Ed Benes) I'll let it go with this series. Why? Because whilst people such as Ed Benes can't draw anything but cheesecake, artist J.B. Neto does a pretty good job with demons, angels, and a host of crazy creatures. Sometimes his way of illustrating action can be a bit confusing, however. Plus the story is quite fun. 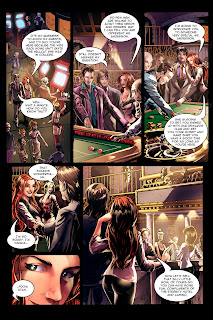 As I mentioned, this is not a comic that is afraid to be politically incorrect. One of the reasons I enjoyed this is while Marvel and DC are scared of trivial little controversies or even being asked tough questions (you seriously are going to quit doing Q&A with fans online because they want actual answers to real questions, DC?) this comic isn't afraid to take plenty of pot-shots at politicians  popular culture, and of course religion--and for that I tip my hat to publisher Big Dog Ink. Jesus comes off as someone who is both at once caring and creepy, Danica, the granddaughter of the devil is both easy to like while also purposely unpleasant, and plenty other crazy characters appear too that make the darkly comedic tone of this comic keep moving along nicely.

Overall I enjoyed reading this comic thanks to its ability to be funny and not let what is in "good manners" limit it. It is a solidly fun time and worth checking out if you want something different to add to your stack o' comics.
3.5 out of 5 stars.

As I always want to give you readers full disclosure--I paid for the trade paperback at Wizard World Saint Louis but got a discount of five dollars because I mentioned I would review it--of course I warned them I would be objective and could very well hate the comic. I ended up liking it though, clearly.
Posted by David Charles Bitterbaum at 2:42 PM