My First WildCon Was a Blast! 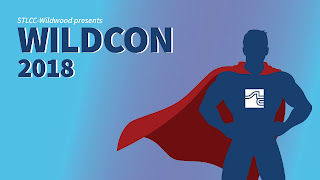 Saint Louis Community College at Wildwood for a number of years has held their mini-con, "WildCon," and this year I was able to attend for the first time! Put on yesterday by the department of Campus Life and College Transition, it has a bunch of student volunteers to help run it and was stellar!

Despite calling itself a, "Mini-Con," there was a ton of stuff going on! WildCon is completely free and geared towards being fun for families so there was great deal of activities for all ages--something I liked as sometimes cons seem to forget that there are younger fans of comic-culture out there! For all the ages there was everything from face-painting, to temporary tattoos, coloring, making your own cape and super-hero mask, old-school video-games hooked-up, and the Saint Louis Student Robotics Association was there with some incredibly cool robots that people could drive around with remote controls. Plus, as all good cons need there was a photo booth for cosplayers to take a picture at before taking part in the cosplay contest. I also quite enjoyed playing with the display of, "Devil sticks," which involves careful balancing...so I enjoyed it but was by no means good at it! Throughout the day other activities occurred as well such as Magic Tournaments, karaoke, and there was cake!
There were a number of creators present at the con, with Author Morgan Straughan Comnick of the, "Spirit Vision," series there, as well as talented caricature artist Andie. I met pocaster Jim Yelton of the, "Geek Universe," podcast, and ran into Mike Cole who I often see at comic-cons displaying his stupendous art! I especially was impressed with what app-maker Ryan Talbert had at the show. He was showcasing his new app, "HerdMap," which I had actually seen an ad for at an ice-cream shop the previous day! It is an app you can download to your phone and use to read reviews of local businesses--not unlike Yelp--but the really cool aspect is that a number of businesses have partnered with the app to provide coupons and deals exclusive to HerdMap. This makes it a great way to discover a new place to shop or eat and get a good deal. In addition, a portion of its profits are put towards animal-based charities. I've been fiddling with the app and find it quite user-friendly and intuitive. The majority of deals are based in Saint Louis for now but Ryan told me he had plans to expand it soon!

There were plenty of vendors at the show, from the always-radical STL Comics to other comic-sellers plus the great Anime-based store, Animeggroll. I also was impressed with the wares on display from Alexandra Geektique. I picked-up a first issue of the old, "Howard the Duck Magazine," as well as a trade collection of the trippy, "Supreme: Blue Rose," Warren Ellis and Tula Lotay did recently at the show, so I was pleased! 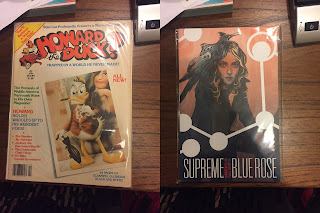 My first time at WildCon was was a blast! From all the fun activities, to great number of creators, to the packed vendor hall this free comic-con was awesome for kids, adults, and anyone who just loves having a great time! I plan to go again for sure next year in March of 2019 and will also have my wife and son come along so they can enjoy it too!
Posted by David Charles Bitterbaum at 7:59 PM