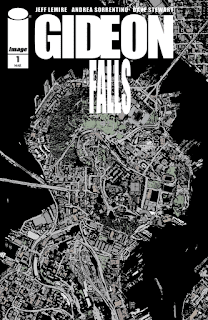 I read the new horror-themed Image title, "Gideon Falls," and found myself quite enjoying it. That shouldn't be a surprise as it is written by the talented Jeff Lemire and illustrated by the amazing Andrea Sorrentino. This creative team has of course worked together before, be it during a run on, "Green Arrow," for DC or the, "Old Man Logan," comic at Marvel. Sorrentino's art style is just abstract and stylish enough to really grab the reader's eye while not being overly garish or difficult to decipher. Meanwhile Lemire's writing always seems to be its best when he's allowed to tell a yarn at whatever pace he likes, with some (but not all) of his Marvel and DC work feeling rushed or incomplete but his pieces done for other publishers usually giving the sensation of being allowed to, "Breathe," a good deal. They make a good team, in other words.

In its first issue, "Gideon Falls," introduces us to two characters who don't yet know each other but their paths will surely cross sooner than later. Plenty of mysteries are introduced (what is this black barn?) and we get a nice sinister vibe throughout the whole issue. We have an old priest who has been called to town due to a death of the town's previous holy man, and things clearly aren't quite right. Also witnessed is a young man obsessed with gathering random garbage for an unclear reason when not reassuring his therapist he's perfectly fine. A few other characters pop-in but as a sudden and gruesome death at the end of the first issue makes clear, things are going to get bloody fast.

"Gideon Falls," has atmosphere to spare and sets a lot of groundwork for an intriguing story. It also is outright gorgeous. My only issue is that so many questions are raised I worry how long it will take to begin getting any answers. I'm excited to keep reading however and see where things go.
4.5 out of 5 stars.
Posted by David Charles Bitterbaum at 9:04 AM