Saint-Louis Comic-Con 2017 In Review--Items I Got

Items = Fun!
I met cool people at the show of course, but when we go to comic conventions don't just make precious memories, but it's also fun to get stuff too. With that in mind, I want to present the things I got at this year's Saint Louis Comic-Con!


Stuff I Got (in Alphabetical-ish Order) 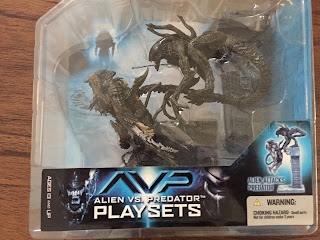 Alien VS Predator Playset
I of course love many of the, "Alien," movies and adore a number of the, "Predator," flicks. While I may not be the biggest fan of the movies where characters from the franchises actually met, this playset a vendor had out caught my eye and after I found myself repeatedly walking past it and staring at the darn thing during the show I knew I just needed to buy it. 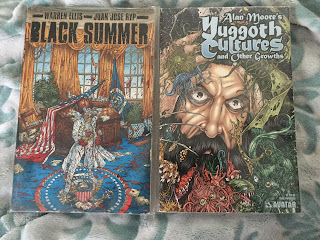 Avatar Press Trade Paperbacks
I'm a big fan of comics new and old from Avatar Press, so when I saw these two trade paperbacks on sale for just five dollars each I grabbed them. I already have a hardcover copy of, "Black Summer," but don't have it in paperback and this collection of some Alan Moore-works looked fun, so it was a good purchase. 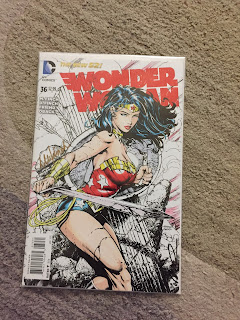 Colored-in Wonder Woman Comic
I previously picked-up this black-and-white variant Wonder Woman comic which I got signed by its writer, Merdith Finch at another comic convention. I wasn't a huge fan of the story-arc this became but love the art by David Finch on the cover. Jeff Balke was kind enough to let me commission him to give it some color and really make it pop! It now looks even better displayed on my bookshelf thanks to the awesome color. 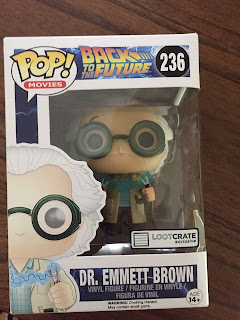 Doc Brown Funko Pop
As my wife and I were married on what is known as, "Back to the Future Day," we enjoy collecting various items related to the series. Therefore, when I was able to grab this Funko Pop of Doc Brown you know I jumped on the opportunity to have it! 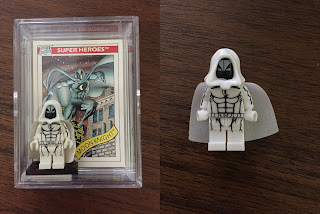 Moon Knight Figurines
I got two awesome Moon-Knight minifigures, one in a snazzy case for display and another one by itself for enjoying with my Lego playsets! 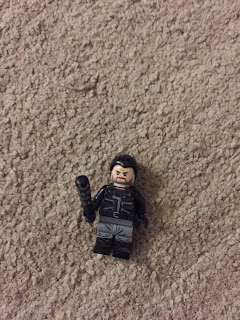 Negan Minifigure
My Mother-in-Law is a huge fan of, "The Walking Dead," and her favorite actor by far is Jeffery Dean Morgan. Therefore, when he became Negan for the television show she was basically in heaven. I knew she would appreciate a cute little miniature version of someone who on the show is not at all sweet and adorable. 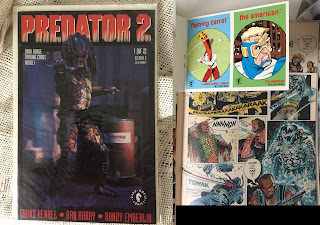 "Predator 2," Comic--With Dark Horse Trading Cards!
As discussed earlier in this post, I love the Predator movies. There have been a variety of Predator-related comics but this one looked cool as it was the first issue of the official comic-book adaptation of the 2nd movie. Also, the Dark Horse trading cards that were advertised as coming with it still were in the comic, which I took as a sign I ought to snatch it up. 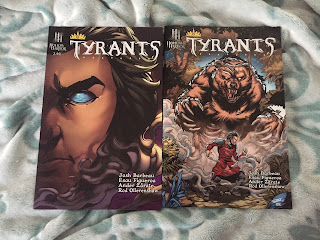 "Tyrants," Comics
I mentioned meeting the guys from Hollow Harbor press in my post earlier today, and this was the comic-series they were at the con promoting. It is about a family dealing with power, magic, and sounded exciting. I look forward to reading and reviewing it!

Hooray for Things!
I tried to be responsible with my budget this year and only get stuff I really wanted--and not buy too many comics as I've been selling many of my books already, after all. I think I did a good job with that goal, as I didn't purchase too much, but what I did buy (or was given for the purposes of review) I am really pleased about.
Posted by David Charles Bitterbaum at 12:59 PM