I'm Not Going to Bother With Seeing "Fantastic Four" in Theaters 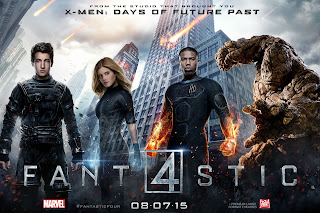 I had this hesitant feeling about the new "Fantastic Four" movie. There was a decent cast, with Michael B. Jordan being a fantastic actor whom I felt excited to hear was Johnny Storm--regardless of all the people protesting his color. the Director, Josh Trank, had made a cool super-esque type film in form of the beloved "Chronicle." There even was an interesting-looking trailer that gave me inklings of hope, which is of course the most dangerous of all emotions. I say it's the most dangerous, because it is so easy to dash a person's hope and have them become angry, disillusioned, cynical, etc.

Based on what I'm hearing in terms of reviews of the movie (in writing or via word-of-mouth) there seems to be a lot of people who found their hope was for naught, and despite dreams to the contrary of their finally being a good "Fantastic Four" movie, reality came crashing down and left us mess of a film that showed me my hesitance was right all along.
I haven't seen, "Fantastic Four" so for all I know it might be great in my own opinion, and when it comes out on DVD I may very well rent it. It is just that my own doubts mixed with a lot of what I've read (a hilarious summary of the film can be found here) gives me the perception that I would feel about this movie the same way I did the past two I saw and found myself wholly unimpressed by--or possibly even dislike this even more.

Don't get me wrong, I hear there are moments of enjoyment sprinkled within the movie, just as I would expect there to be considering there are usually parts of any movie I like--for example, I even found some bits in the aforementioned earlier "Fantastic Four" movies cool. That said, when people are proclaiming that the Roger Corman version from the 1990's was better, that's pretty harsh.

So...Who Do We Blame For This?
There has been a lot of finger-pointing about who/whom is to blame for the final product, with Director Josh Trank posting and then deleting a tweet hinting at studio interference, rumors Fox had been smearing Trank with fake "leaks" of derogatory information about him, and Marvel's staff meanwhile are standing on the sidelines rubbing their hands with demented glee at the grim monstrosity this box-office bomb has become--and wondering if maybe they'll snatch those film rights away from Fox (if you don't know how all this film rights stuff works, here is a good summary).

Oh, and I doubt Ike Pearlmutter's personal campaign of destruction against the characters to spite Fox had too much of an impact on the movie's box-office or it otherwise being supposedly terrible, but I still bet he had a good laugh after the abominable debut-weekend of the flick.
I'm not sure who we blame, but this makes it apparent that just because you make a movie based on a comic or super-heroes that does not guarantee box-office success. I hope this doesn't spur those annoying, "Are Super-Hero Movies in Trouble?"-style of articles, because those always seem to be put out when a single movie has trouble. This doesn't show that super-hero films are some kind of fad or doomed, it just illustrates that if you're going to make a super-hero flick you better make a good one or people will simply ignore it. The biggest downfall of this movie simply is that it apparently is not very good, and while there are plenty of great movies that fail and bad movies that succeed, when you make a movie that is just somber, miserable, and wholly unimpressive, folk often ain't gonna pony-up the cash to see it.

Therefore, I don't know who we blame. I suppose the deep and thoughtful-sounding answer would be that we blame ourselves, the fans. Why us fans? Perhaps for expecting too much or some B.S. like that, but I honestly don't think it is expecting too much at all just to want a decent movie about the "Fantastic Four." I say we blame Capitalism, or Socialism. Some kind of, "-ism," has to be ready to take the wrap. Then again, it could just be that the argument is true that at the end of the day, the Fantastic Four themselves frankly aren't that likable or interesting.

Hard to Like
There are some amazing characters that the Fantastic Four have interacted with. There have been some great stories involving the Fantastic Four. The Fantastic Four aren't really that cool themselves however. I've never been a big fan of the character's themselves, finding only maybe the Thing to be at all bearable as he truly is in a tough spot being stuck in the form of a chunk of rocks. The rest of the team are just kind of jerks, and as this article discusses, it has been that way from the start.

I personally was never that invested in the Fantastic Four as a team when I would read about them. I just often found they encountered a lot of problems and handled them pretty well, before going back to live in their fancy tower. The Avenger's might have a big tower, but they seem to genuinely want to help people. The Fantastic Four just kind of give off an image of thinking they are better than everyone else--again, with the exception of Ben Grimm/The Thing.
You can have super-person who is unlikable and still make them fascinating--just look at how much I loved Rob William's run on the saga of Daken/"Dark Wolverine". Making them hard to like and dull, however? Yeah, you've sunk your ship of possible profits.

You could argue there are plenty of people who love the Fantastic Four and I would not dismiss your claim. I just personally am not a big fan of them, and hearing that a movie about the group was going to occur yet again, elicited a shrug, my earlier-mentioned hesitant feelings, and now I just shake my head and mutter, "This isn't surprising."
Someday we may get a good movie about the Fantastic Four, but for now we just have yet another, "Fantastic Four," that apparently fails to excite. Should I see it sometime and be pleasantly surprised that I actually like it I will let all of you know, but for now I'll pass.
Posted by David Charles Bitterbaum at 10:15 PM