Spotlight on Three of the Comics Published by "Birdcage Bottom Books"

Why A "Spotlight"?
I've been looking more and more into independent comics, as I've discussed on this blog. One publisher whose output I found to be especially interesting was Birdcage Bottom Books. I've picked-up some of their stuff at one of my local comic shops and after talking with the publisher, J.T. Yost, was able to view some more titles . Having looked at so much of their material that I both purchased and received for the purpose of review I figured I could do a spotlight of sorts on three of their books, discussing what I liked along with what wasn't enjoyed by me. At the end of this you can check them out at their website and look at what I reviewed along with their other products--or you don't have to; I mean, it's your life, do what you want. Where were we? Oh yes, reviewing some of BBB's stuff.

Tales of Good Ol' Snoop Doggy Dogg
A mini-comic written and illustrated by BBB's publisher, J.T. Yost, this booklet consists of Yost sharing some strange dreams he has had about adventures with Snoop in addition to telling an autobiographical tale of how he came to discover Snoop's music. As a fan of the Dogg myself, I found this comic enjoyable and could relate to Yost's experiences. The early sections focusing on Yost's dreams are perfectly alright, but I actually found myself more interested in when he starts telling us about how he came to learn of Snoop Dogg. This is probably because while the earlier stories are fun, we see more of a vulnerable side to Yost in the autobiographical tale where he shares how he was another nerdy kid who suddenly found himself enraptured with the fascinating beats and rhymes of Snoop's music. Perhaps the fact almost all of us can relate to those uncomfortable moments of being a teenager are why that last story especially spoke to me. Without the last tale the comic would be a solid 3 stars, but thanks to that solid last part this gets...
4 out of 5 stars. 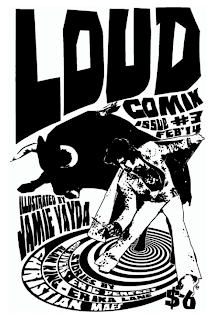 An anthology series with the concept being the stories are authored by members of rock bands and other music enthusiasts, this issue came out in earlier 2014. The first story features a tale by Alan King--who admits to having been in some bands you probably haven't heard of--and how he ended up making a mess in his pants at a Motorhead concert. It is pretty funny and gross--two things I always enjoy. 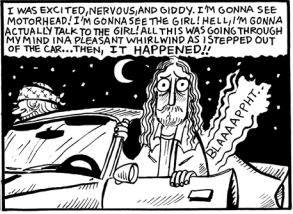 After that is a short comic called, "Roxie and Molly," about  two prostitutes discussing finding a new pimp. It is wholly unremarkable and a little depressing in that the main gag is that the pimp they want to go to has poor upper-body strength and therefore can't hit them hard--I did not like it. Next-up is a story by Eric Perfect about the days when he used to do a lot of cocaine and had to deal with the paranoia that came with it. It's a perfectly fine story if not particularly remarkable or interesting outside of the usual, "Boy, drugs sure do make you paranoid, don't they?" theme. Next up is a one-pager featuring Roxie and Molly talking with a blind man where the punch-line this time is that they smell so rancid down-there that he thinks they are carrying a tub a fish. Yeah, not very funny and if there are jokes about lady-business that have been run into the ground that's definitely one of them.
We then get a pretty humorous tale by Joel Rivers in which he discusses the absurd lengths he went to back during his high-school years in the hopes of getting a girl he lusted after to flash him her breasts. Basically, he and his friends had to pretend they were satanists and it all ended up being for naught anyways. It's quite funny. Afterwards is another Roxie and Molly comic that again doesn't really go anywhere or say anything funny. Lastly, we  get the start of a comic featuring a man known as "Captain Catastrophy" written by Christian Males and it isn't bad, but is really just the set-up to how the Captain and a man he is traveling with inadvertently are going to make a bunch of bloodthirsty bikers angry. It is a bit annoying it ends right when things start to get interesting. 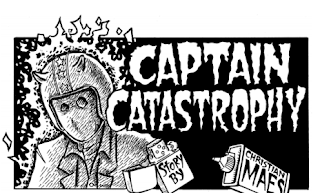 Overall this third issue of "Loud Comix" suffers from how it has two solid stories (the first one about Motorhead and Joel Rivers yarn about pretending to be a satanist), but otherwise is pretty mediocre-to-poor depending on if its the duller stories, the final one ending right before things get exciting, or the horribly unfunny Roxie and Molly. There is a new issue out and it may be better, but for this one the mixture of quality evens out to make a comic that is a bit below-average with a rating of...
2 out of 5 stars.

Cringe: An Anthology of Embarrassment 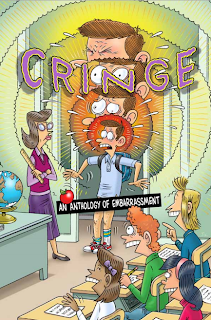 I've reviewed two titles that could be called mini-comics, but Birdcage Bottom Books does put out good-sized trades too. One of their latest is an anthology wherein people share tales of embarrassment and humiliation. We as individuals seem to hate our own moments of misery but relish reading about others' pains for some reason--the German's call it schadenfreude--and  that is probably one reason I greatly enjoyed, nay, loved this book. 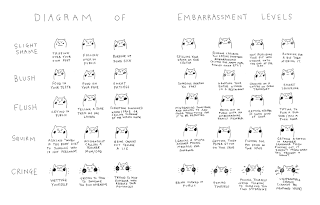 There is a good assortment of talent, from folk I know of pretty well (Noah Van Sciver, Jeffery Brown) to other individuals I have not heard of before but found myself quite impressed by (Lizz Lunney's contribution, "Levels of Embarrassment," was hilarious in its listing of degrees of shame a person can feel and has me wanting to seek out other works by her). The stories have a wide-range from incidents of slight discomfort (a man who already has a girlfriend trying to massage the author's shoulders in a darkroom) to being mad at another person (a fellow grade-schooler mad that people liked the author's artwork ruined all of his crayons and lied about it), to just looking like a huge, embarrassed fool (thoroughly insulting a rude woman at a bar who turns out to be the girlfriend of the author's good chum he was waiting for). Each segment has some aspect that makes you cringe as the title says, and that results in some quality storytelling.
"Cringe" is a bunch of fun and while many anthologies can fall victim to having some amazing stories and some poor ones, there honestly was not one yarn in this anthology that I disliked! Considering how everything in this book was at least good, and a lot was amazing I can without hesitation award this book...
5 out of 5 stars.

Closing Musings
From these reviews you can see that just because something comes from an independent publisher that doesn't automatically guarantee it is as awesome as one could hope ("Loud Comix" #3 disappointed), but oftentimes the creative freedom that comes with being a small publisher can result in some wacky and creative work (the "Snoop Doggy Dogg" comic) or something that is just a sheer joy to read ("Cringe" was wonderful). I've always found more I liked than disliked with Birdcage Bottom Books, and  that is why I wanted to review some of their stuff, both good and, "meh." I encourage you to check out the website for the publisher at birdcagebottombooks.com and maybe get the items I recommended or try something else out that tickles your fancy.
Posted by David Charles Bitterbaum at 3:28 PM