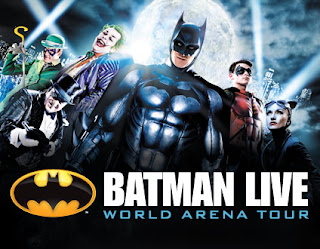 About more than a couple of weeks (but less than a month) ago I saw, "Batman Live," in St. Louis with my girlfriend--who was more than kind enough to buy us tickets as an early Hanukkah/Christmas present. It was quite an enjoyable time even if the "play" had a slow start. I put the word "play" in quotation marks as this wasn't so much a piece of theater as it was a hybrid of acting, acrobatics, magic tricks, and general craziness, but the good kind.
We open with a young Bruce Wayne cruelly losing his parents, afterward jumping to some crazy circus acrobatics--before Dick Grayson loses his parents too. From this point on we have Batman investigating who was behind the murders as Dick Grayson attempts to help. The first act of the play before intermission had to of course set the stage for Bruce Wayne and Dick Grayson to have the motivation to become heroes, and then all of the villains had to be introduced, but still, things just seemed to lag at times in the first act (of two) before right at the end when the Joker appeared. Between the origin stories and a weirdly choreographed roof-top chase and fight between Batman and Catwoman things were sometimes a bit on the duller side. One exception to this is the Penguin's first appearance at his Iceberg lounge. The dancing and aerial-tricks with that were so weird and trippy that scene stood out.
Speaking of trippy, this show had a weird mixture of the high-tech Batman of some comics and movies, mixed with the more out-there stuff of Grant Morrison's Batman's comics and some of the zanier silver-age stories. There was also a fair helping of humor, so this was definitely not the grim-and-gritty Batman of some comics or the Nolan films. In the second act with the Joker doing magic-tricks to show how he'll kill Batman, to an attempted hot-air balloon escape, things are quite weird. However, everything stays entertaining enough that it is never too much absurdity.
The show is good family-fun and can be enjoyed by all ages, which makes one extremely-dark scene kind of stand out. Towards the end of the story when Batman goes into Arkham Asylum to fight his rogues gallery he has an encounter with The Scarecrow. The Scarecrow in the show is a huge man on stilts and makes Batman hallucinate (or is it real?) a ton of dead people in weird burlap-sack-type coccons hanging by chains. I'm not making this up, observe:
Other than that, things never get too violent besides delightfully-choreographed fight scenes where things keep getting switched up to keep the show fresh. From the kung-fu poles people both dance and charge at Batman with, to the great side-by-side fighting Batman and Robin do (once Grayson dons the costume) it is always a hoot to watch the battles that occur.

"Batman Live," was a great time, and if it happens to come to a city near you I would recommend going and seeing it. You will be entertained, laugh, and marvel at the intriguing set design and costumes. It may take the play a bit to kick into gear, but once it does the rest is a rip-roaring time. My girlfriend who doesn't really read comic books enjoyed this too, so even friends and family who just know the bare minimum about Batman should have fun. Check it out if you happen to get the chance, you'll be glad you did.