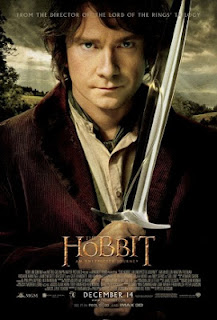 As opposed to the, "Lord Of The Rings," movies which seem to be near-universally loved, "The Hobbit," has been dividing critics. It seems the biggest complaint has been that, "The Hobbit," movie is pretty tonally different from the LOTR flicks. Well, people have been saying the same thing about Tolkien's books for a long time too! Perhaps the big issue is that when he made, "The Hobbit," that was meant more as a book for children and youth, infused with humor and whimsy. Then, Tolkien made LOTR, which while drawing from characters and plots from, "The Hobbit," is much darker, full of complexity, and a lot more dramatic than Tolkien's first book, which arguably is just a stage-setter for his LOTR saga. "The Hobbit," is tonally different then, okay, fine. Is it any good in my opinion however? Yes, it is. 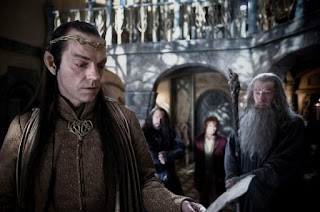 This may ruin some of my nerd-credibility but I never read any of the LOTR books. I did read about half of, "The Hobbit," but the only bits I remembered from the book are when Bilbo tricks the trolls (because that scene is funny) and of course the first encounter with Gollum where they play a game of wits and Bilbo gets the famous ring. I was pleased to see both of these moments occur in the film--one earlier on and the other close to the end of this first-flick. Besides these moments I enjoyed the film is good fun all-around. Bilbo, the dwarves, and Gandalf go off adventuring and encounter various obstacles in the form of orcs, rock-giants, and I assume needing to often take breaks so that everyone can brush out their beard (seriously, pretty much everyone has immense facial hair that must take forever to groom). The variety makes things fun but it never gets overly-complicated. 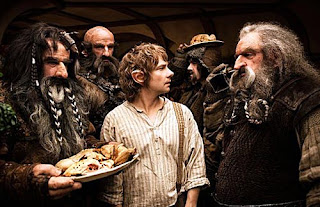 It's a straightforward enough plot. The dwarves want to reclaim their old kingdom and need to fight a dragon, meeting old enemies and making new ones along the way. It's not overly-deep or philosophical as the LOTR films sometimes aspired to be, but it is great for kicking back and munching some popcorn while Orcs get beat-up. I was entertained even if the movie was a bit slow to get going at the start and feel I got my money's worth. Do note that I saw this in 2D as I generally can't stand 3D films. Therefore, if you paid the extra money for 3D I don't know if you should feel pleased or robbed by this movie.

This isn't a perfect film. People went in expecting another, "Lord Of the Rings," and instead got, "The Hobbit." People who read LOTR before, "The Hobbit," probably have been disappointed throughout history too. It's still a good film though, and worth seeing. Just don't go in expecting to be amazed so much as to have a good time. Keep your expectations reasonable and you should be happy.

Email ThisBlogThis!Share to TwitterShare to FacebookShare to Pinterest
Labels: movies, rant-reviews, The Hobbit