The Problem With "Daredevil: End Of Days" 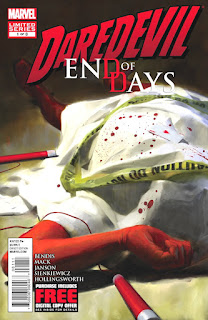 I've been thinking about, "Daredevil: End of Days," and how I was kind of disappointed by it. For a comic long promised by Marvel under various names ("Daredevil: The End" was one that I remember being tossed about) I was underwhelmed.

It wasn't the art that left me cold, as I absolutely loved that. It was grim-looking as I would want a Daredevil comic to be, while also having a slight old-school feel as if appealing to our nostalgia for the equally-dark Daredevil tales of old (for example: Born Again). The painted parts of the comic and finishes by Bill Sienkiewicz were just gorgeous. No, the fault is on the writing by Brian Michael Bendis. What aspect of the writing, though?

Was it the fact that the story took place somewhat in the future but didn't feel very futuristic? No, I didn't mind that at all either. The near-future won't look very different from today, with just some new pieces of technology but most likely the same vehicles, buildings and such. The biggest change from the 90s to 2000s was arguably the growth of the internet and cell-phones but other than that, things don't look quite different than 20 years ago...so I'm cool with this aspect of the story. Plus, it does point out how social media has become even bigger with everyone filming everything, and how newspapers are all but dead in the future so it does take today's trends and expands on them a bit.

Was it Bendis' usual writing tics that upset me? Nah, I'm used to his style of having characters "talk" the way he makes them, or how he does exposition dumps in chunks of text. I even liked the somewhat-choppy way we saw what Ben Urich was writing for his article about the death of Matt Murdock/Daredevil and what he was truly thinking as he wrote it--that was pretty neat. 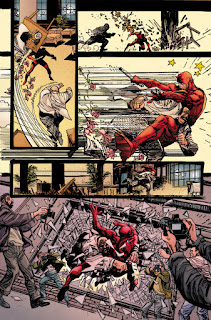 I think the thing that bugs me is a feeling of, "why now?" I don't mean that as in why did the comic come out now, you could ask that about many comics. My, "why now?" is to how Daredevil decides to kill the Kingpin.

The Kingpin has had Daredevil's girlfriend's murdered, beat Murdock to a pulp, got Murdock sent to prison with an elaborate scheme, and otherwise has ruined our heroes life in countless ways many times--with some of those times being written under the pen of Bendis during his great run on the character. So, why is it that Daredevil suddenly decides to one day just kill the Kingpin because he made a deal with the Federal Government to not be prosecuted for a bunch of past crimes? Why does this push Murdock over the edge when so many times the Kingpin has done things to Murdock that should have made him crack then?

True, our hero does stand over the Kingpin's dead body after killing him and simply exclaim how he had tried everything else, and this was his last resort...but again, why now? It does make sense how after killing the Kingpin, Daredevil/Murdock disappeared for years until the day he was seemingly killed (I say "seemingly" because it appears there is a Daredevil lurking around in the shadows at the end of this first issue). It makes sense because Murdock crossed that line most heroes don't. I imagine the book will fill us in on what happened between the years Daredevil disappeared and reappeared that day he was murdered, but will the book make it any clearer why he chose to murder the Kingpin on that occasion, of all of them he should have killed him, and it would have made more sense? 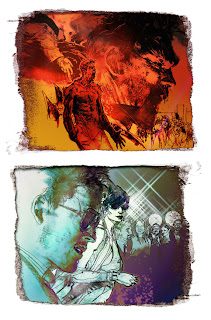 Bendis did an amazing run of Daredevil, those issues are some of my favorite comics. I went into this trying not to expect too much, but I had a glimmer of hope we'd get some of that old magic back. Right now we have a comic with gorgeous art but a story that strikes me as just kind of weak. Perhaps things will in fact work out wonderfully, but for now I can only say I'm disappointed with this start.
2.5 out of 5 stars (It'd be 2 out of 5, but that art is just so amazing).
Posted by David Charles Bitterbaum at 1:08 PM