And As We Proceed...
I need to get back in the swing of posting things more regularly. Let's talk about a comic, a video-game, and random other factoids about those two forms of media and other stuff to get my knack for writing gibberish back.

Good, But It Needs Some "Oomph" 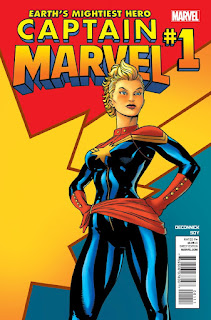 The name, "Captain Marvel," carries with it a long and confusing history, but basically the hero Ms. Marvel has gone and adopted the name of the once-popular-now-dead-for-some-time-except-for-the-occasional-fake-resurrection (that's a mouthful) Captain Marvel. Written by Kelly Sue Deconnick (friend of the blog, see an interview with her here) this is not a reboot of Ms. Marvel as she still has all her past, she just is taking a new title (for her) now. Time to delve into my observations!

First off, let's discuss something pretty unimportant. I hate that new do' of feathered hair. The first idea for a new look of her hair was much better: 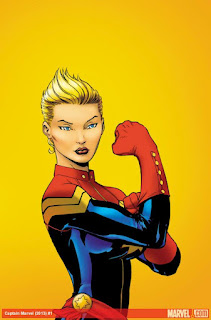 That observation aside, this was a perfectly fine comic, but it missed something special. Yes, the art was a bit lacking as some have noticed, but that didn't bug me too much. Also, there is no big conflict introduced this issue either, but I found that a little refreshing to not have an opener start with some world-destroying threat our hero has to face before we can get their new status-quo established, though maybe the fact this is all set-up bugs me a bit. Some complained the psuedo-poem that flies about the pages in panel-less white text was hokey in its attempt to be sweet, but that didn't bother me much and I kind of liked it. So what was missing for me in this comic? I love Kelly Sue Deconnick's writing generally and did enjoy this after all! 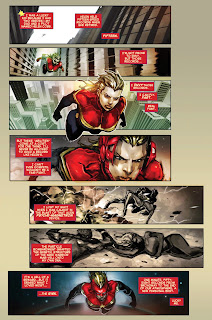 Maybe this issue just lacked a spark of me wanting to know what happens next. Yes, I think that's it. I'm not alone in thinking this was all set-up either, to bring up my other observation once more. All the pieces of a great story are there, they just haven't come together in a way where I'm at the edge of my seat wanting to witness everything play out. Maybe I just need a few more issues to get that, "wow," factor from this--an injection of some, "oomph," into the story so I get really pumped to read more. Deconnick is highly skilled, so I'm not too worried about this comic and its chances of being great. I think we just need a little bit of time for it to grow and once it kicks into gear fully we'll be set. Until then, this was a good first issue, but not an amazing one.
3 out of 5 stars.

Terraria is an interesting game. Some people say its basically a 2-D Minecraft. I wouldn't know because much to my shame I actually haven't played Minecraft. I have played Terraria though, extensively, and can report it is quite a good time. 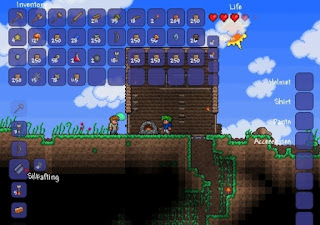 Basically you are thrust into a digital sandbox with nothing to do other than wander around. Through looking at online wikis or just blundering about you will eventually start building houses, fighting gigantic monsters, exploring jungles and dungeons, and doing a lot of digging to the underground. As you mine more powerful ore, smelt better armor, buy crazy items and weapons, and maybe even learn how to use wiring so as to open up a new crazy way of making placed items function you'll undoubtedly have fun and maybe get a little addicted. Oh, and there is a multi-player mode too if you want your friends to join in, although I admittedly have not yet tried the multi-player function.

It's a fun little game and I'm glad I picked it up for very cheap during the Steam Summer Sale that the online service had. I'd recommend getting it at full price as even at its normal cost of 10 dollars you'll get hours worth of entertainment.
4.5 out of 5 stars.

So the novelization of the Dark Knight Rises hints at what happened to the Joker after the 2nd film, but even it isn't sure. Hm.

The fan-film Thomas Jane made is pretty awesome, as is its surprise reveal (SPOILER) that he is playing The Punisher. The original movie with Jane as the lead wasn't too bad, but definitely could have used some improvement. This though, is golden. Plus Ron Perlman pops up in it!

Not only are Tucker Stone and his friends hilarious in every edition of Comics Of The Weak, they also point to amazingly insightful articles like this one by The New Inquiry about the Dark Knight Rises and how searching for political meaning in it is both vain, and a bit rewarding.

Grant Morrison will be finishing up his work with big-name super-heroes around 2013 and will be pursuing creator-owned work. If we get more incredible stuff like "The Filth," (which was done for DC's Vertigo but is creator-owned) I'm certainly up for it.

I haven't heard much of anything about the video-game Watch Dogs since its surprise announcement at E3, but just by looking at the game-play demonstration video again I start salivating at the thought of playing it. When you see a game demo and go, "Wait, how did they do that? And that? And that?" You know it looks like something special.

There are a lot of problem with AVX (Avengers Versus X-Men), Tim O'Neil summarizes many of them well.

Done For Now
There we go, I got some writing up, shared my thoughts, and babbled incessantly. Yeah, it was a good time.