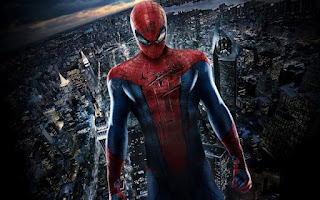 That Was Decently Fun
The Amazing Spider-Man was a good movie. Not utterly excellent, but pretty enjoyable. I was somewhat of the mind that considering not too long ago we had a trilogy of Spidey flicks that maybe rebooting the character was a bit... unnecessary. Having seen the movie and its somewhat new spin on things I am more confident that perhaps starting fresh with Spider-Man was a pretty solid idea, despite the problems I have with the film.

You would think the thing that bugs me the most is going-over Spider-Man's origin again on film. That would make you wrong though, because I found the earlier parts of the movie where the titular Peter Parker is thinking about a mystery with his parents (that somewhat disappears from the film clearly to be continued in future installments) getting used to his crazy new powers, and of course having the requisite guilt about Uncle Ben to be some ofgreat the more enjoyable parts of the movie. Andrew Garfield does a great job even if he looks a little too handsome and fit to truly "feel" like geeky Peter Parker. Emma Stone is quite good as Gwen Stacy too and Dennis Leary is fun as her police-chief father. The problems start to set in a bit later once The Lizard shows up.

I don't want to spoil what evil plan is that Rhys Ifans' character has, but its pretty darn silly. Once we hit the middle of the movie and the focus goes onto our villain's plan the movie just sort of drags. No matter how much cool action we get between Spider-Man and The Lizard fighting that overall goal he has is still pretty absurd. That's a shame as the actors do a great job making the silly threat seem credible even if by the end of the movie I'm pretty much just going, "So that green liquid is bad and the blue one is good...or something?"
Also, even though I tend to prefer the first movie in a trilogy stand somewhat alone and not try to set up future installments, the mid end-credit's teaser with what seems to be the first appearance of Norman Osborn in this universe does make me excited at the idea of Peter learning more about the mystery with his parents, and the Green Goblin showing up in the next movie (I'm pretty sure Gwen is gonna die like in the comics come the sequel and the third movie will be about Spider-Man getting revenge for it, I'm just gonna call that one now).

Overall this is a well-done film with a great start and intriguing finishing tease, but a draggy middle and quite dumb end. If you don't think too much about it though, and just enjoy the action and the hints of good things to come, it's still a solid piece of 2 hours and change. Just be ready for the flaws too. Oh, and no, Nick Fury does not show up to tie this in with Avengers as some rumor-mongers have said, Spider-Man seems to be staying in his own super-hero world for now.
3 out of 5 stars.
Posted by David Charles Bitterbaum at 9:42 PM