I Attended the Toyman Today and it Rocked!

Today I was able to attend the Toyman show which I consistently try to make sure and get out to whenever it occurs. Put on by Chris, "Toyman," McQuillen, it is always full of vendors with toys, comics, and all kinds of goodies. He announced in the morning his plans to continue the long-running show into the foreseeable future and everyone gave him some much-deserved applause. With two floors and over 200 tables of awesome stuff (plus various snazzy guests) I unfailingly have a stellar time. Today was no exception.

Interestingly enough today I was after some particular Funko Pops a friend of mine asked me to search for as opposed to when I go to just browse. I had three Pops I was hoping to find and be able to buy or trade for, and I figured if any place was going to meet my needs it would be the Toyman show. Did I succeed? Well, I'll let this picture speak for itself: 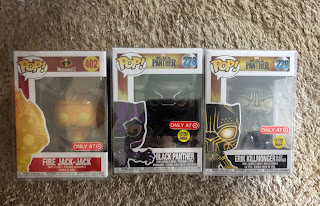 Yep, thanks to the Toyman show I was able to acquire three specific Funko Pops from three different vendors thanks to a mixture of trading what I brought as well some good ol' cash too. I'm not sure if I would have been able to pull-off this task at any other event in the area, but I knew the Toyman show would be the perfect place for my mission--and it clearly was! If I had been after Legos, die-cast cars, or Star Wars memorabilia I would have been set as well, because there is just that much fantastic variety!

I went to the Toyman show and was very pleased the exact stuff I was after could be acquired. It just goes to show how much delightful selection there is at a Toyman show in addition to all the special guests, cosplayers, and creators of cool stuff. The next show isn't too far away, happening August 5th, 2018. I plan to be there and as always encourage anyone else who is able to attend to do so!
Posted by David Charles Bitterbaum at 5:24 PM