Was the, "Roseanne," Revival Ever Going to End Well? 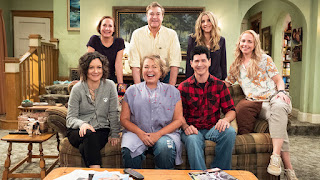 The newest version of, "Roseanne," is cancelled, and is anyone really surprised? Ever since it first began the, "Roseanne," revival was messy. Not the show itself, which was passably entertaining, but basically everything that made-up the show, e.g. the controversy over Roseanne Barr herself. Barr is an outspoken Trump supporter, which I find foolish, but you do you. The thing is, she supported him and would often say troubling, borderline-racist things. The company behind the revival of her show, ABC, would always encourage people to separate Roseanne the person from, "Roseanne," the television show, in some kind of hopes that would take potential heat off them.

The show was a huge hit thanks to a mixture of controversy, Trump-fans supporting it just because of Barr, and of course because it was passably entertaining (and yet the hilarious, "The Mick," gets cancelled, which pisses me off, but I digress). Roseanne didn't ever quit pushing the envelope in her personal life however, and what would have seemed inevitable happened, she finally went from being offensive-yet-getting-away-with-it to just outright tweeting racist shit.

Roseanne tweeted how a former advisor to President Obama, Valerie Jarret, was the result of if the Muslim Brotherhood and the Planet of the Apes had a baby. So yeah, horribly offensive on a number of levels. It resulted in a lot of anger, got her show canceled by ABC quite quickly, and Barr has tried to blame being under the influence of Ambien, which the drug-maker helpfully pointed out isn't known to cause racism. Now Donald Trump himself is bitching about people being mad at Roseanne for exercising her freedom of speech--seeming to forget the hissy-fit he threw when NFL players expressed their opinions too by kneeling during the National Anthem, but when has Trump ever been logical?

This is all a mess and as I said at the beginning of my article, is anyone really surprised? Wasn't it just a matter of time before Roseanne Barr herself went too far and, "Roseanne," the show went down in flames? This wasn't ever going to end well, and the only thing about this whole shit-show that has shocked me is how people were surprised all this happened.
Posted by David Charles Bitterbaum at 11:21 PM