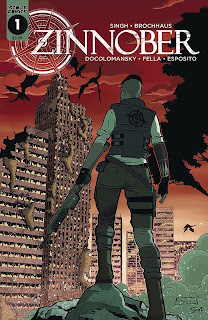 I'm on a press list for the fantastic publisher known as SCOUT Comics and had the opportunity to read an advance copy of their upcoming comic, "Zinnober." The concept is one we've seen in some other forms, a world where dragons arrived and destroyed the Earth, leaving a small number of survivors. However, writer-artist  Ralf Singh and co-writer Thorsten Brochhaus put a new and unique spin on things I quite enjoyed. Things start simply enough--at the start of the issue we meet Claire and her mentor James as they try to save a dog left out as bait for the dragons.

They end-up rescuing another human and learn that there might be some way to fight against the dragons. In the process we also learn about a dragon-worshiping cult which seems harmless, but clearly has some issues, as a cliff-hanger of potential violence makes clear. I liked that, "Zinnober," does the storytelling technique of, "Show, don't tell." It could have spent pages of text explaining the back-story that dragons invaded Earth and people now live in fearful hiding, but instead the comic lets us figure that out as it portrays the ruined world.

Singh's artwork is great, expertly showing the destruction and the imposing nature of a dragon we see. The creature is large and scary enough it seems believable that a bunch of these could have wrecked the planet. Even though it is a big concept, the story keeps things pretty grounded, focusing on the human characters and their everyday struggles to survive. It results in a fantastical world with realistic characters, a blend I quite enjoyed.

"Zinnober #1," is a great start of a story. It's mysterious but tells us enough of what we need to know, has great artwork, and introduces plenty of strong and interesting characters. I'm excited to see what future issues hold for sure. I'd rate this a great 4 out of 5 stars. You still have time to tell your comic shop to hold a copy of, "Zinnober," when it comes out and I'd encourage you to do so, this is a fantastic read!
Posted by David Charles Bitterbaum at 8:18 PM