The First Event-Comic To Sound Intriguing to Me In a Long While Isn't Even Necessarily an, "Event." 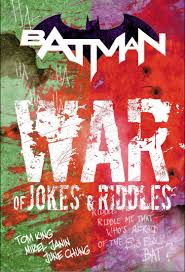 I was on the internet and in-between reading news about how the Senate is devolving into, "Nuclear option," madness or getting further reassurance I was wise to be leery of the new, "Mass Effect," game I saw a report about a comic-event that actually sounded cool. Called, "The War of Jokes and Riddles," It seems Tom King is going to be doing a story set a bit in the past about a bunch of Batman's villains going to war with one another under the leadership of either the Joker or the Riddler (who are the main aggressors causing all the fighting). I personally feel Batman has most of the best villains in comic-books and such a concept actually makes sense--something many events lack. I mean, Gotham is full of baddies, why wouldn't two of the bigger ones try to wipe each other out so that they can have more power and just worry about Batman as opposed to Batman and other crooks? Plus, unlike all those comics lately where heroes go to war with one another for a dumb reason this is quite logical--evil folk trying to destroy other evil folk.

I heard about this event though and as soon as I got excited I let out a sigh, because I just knew this was going to be some kind of absurdly long mini-series with a ton of spin-offs and comics tying-in needlessly, right? So, I go and see just how bloated this event will be and..it is just an epic-length story-line in the standard, "Batman," comic written by the aforementioned talented man known as Tom King? What? Seriously, this will simply take up issues #25-#32 of the Batman comic and not feature any extraneous tie-in comics, which just seems wild--I mean, can comic companies actually do an event in a regular comic legally still? I thought anything that was an, "Event," had to be put in its own special comic with the mark-ups in price that usually includes. I am often pretty harsh on comic companies (Marvel and DC especially) for their never-ending stream of events that encompass nearly the whole line of comics and do a better job making me want to quit a book than put-up with it suddenly being a part of some, "Epic, world-ending," story I have zero interest in. This though, this actually sounds cool and like something to seek-out. I couldn't care less about, "Secret Empire," and DC's upcoming, "Metal," comic (also about Batman, actaully) has a great creative team but I'll be skipping it too in order to save money. "The War of Jokes and Riddles," sounds completely affordable and interesting compared to everything else though. This is the first event-comic in a long time that sounds interesting to me and it isn't even a true, "Event," in the sense of how that word has been used lately with comics. That's kinda funny, isn't it?

Seriously though, I tip my hat to DC and the creators behind this for making it an event in the way many older stories in comics used to be--it is within the main comic and isn't bogged-down with tons of extra filler. You done did good this time, DC, you done did good.
Posted by David Charles Bitterbaum at 1:42 PM