In The Words of The Young People Pepsi Was Trying to Market To With Their Ad About Protesting, "Epic Fail!"

Pepsi made an advertisement that upon watching I think is giving us the message that next time people want to protest something they should offer the police Pepsi and that'll resolve all the World's ills, I guess? Really, it's a horrendously stupid advertisement and the words, "Tone deaf," have been used extensively to describe it. I won't bother embedding it here because Pepsi is working hard to pull the ad and--I assume--try and burn it out from our collective consciousness as quickly as possible. Wired talks about the video and has a copy of it though, and I bet they will stay pretty up-to-date on making sure it doesn't disappear from the web.

Basically, if you haven't heard, the ad features a diverse group of young people (A Muslim lady, an Asian man, rich people like Kendall Jenner) joining a protest about...something, and marching proudly to show how they are hip and proud millennials in-between taking short breaks to drink Pepsi and engage in break-dancing (I'm not making this up). It all comes to a head however when the protesters encounter some cops and Kendall Jenner hands a Pepsi to the police officer who cracks it open and drinks it to the loud cheers of the crowd. Racism/Sexism/Homophobia/Xenophobia solved everyone, we can go home now!
Shit, when counting all the times I've been happy to prefer Coca-Cola over the rancid taste of Pepsi this is easily one of those moments. It seems like everyone is either enraged by the video, mocking it, or is asking, "Who the Hell is Kendall Jenner? Is she like a less-famous version of the Kardashians?" Pepsi, when it comes to marketing soda-products you done fucked up at a level I didn't even realize was possible outside of that time Mountain Dew made an ad with a police line-up making light of institutional racism.

How the Hell could Pepsi make a video about protesting where a bunch of people mad (although they don't even look upset) about nothing in particular are able to make the world a happier place by simply sharing a Pepsi with a Police Officer? Is that all everyone who ever protested had to do--offer the police a Pepsi? I think Bernice King, one of the daughters of Martin Luther King Jr. summarized it best in this actual Tweet she sent out today: 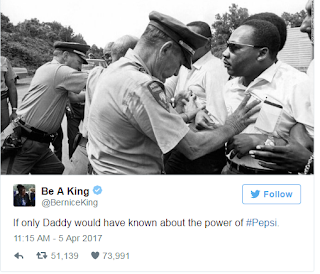 That is without a doubt my sarcastic comment of the day (trademark pending) and one fiery burn against Pepsi. It is a burn they are surely due, however, because the most insulting thing in my opinion is that Pepsi isn't actually making any kind of statement here. The young people aren't protesting for a cause Pepsi does or does not support, they just are out and about, looking like attractive millennials and drinking some sugary sludge. If Pepsi at least had made this about a real issue they would be saying something, anything. The only thing they are saying here is that in their theoretical world everyone can just drink Pepsi and get along (which as a lover of Coke sounds less like a utopia and more like a nightmare--the Pepsi part, not everyone getting along).

Pepsi wanted to seem cool and hip by talking about protesting and having a blasé celebrity appear, but instead just came off as even more removed from reality. Pepsi's ad is as much an example of talking to the youth-culture of today as that joke where Steve Buscemi pulls a, "21 Jump Street." We clearly see what you're trying to do, and it ain't working. 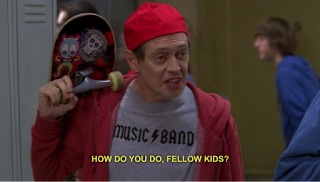 This whole fiasco is as hilarious as it is depressing and can teach us...um, what does it teach us? Perhaps there isn't an actual lesson to be gained from this outside of, "Fire your marketing team, Pepsi." Oh, also, "Don't try to co-opt a cause without actually co-opting anything." Now, if you'll excuse me I'm going to grow drink some water because even if I admit preferring Coke I should really drink more H2O as opposed to carbonated chemicals, no matter how good (or bad, in Pepsi's case) some of them taste.
Posted by David Charles Bitterbaum at 5:01 PM