A Strange First Five Minutes
I've been inside the main convention-center of Wizard World for all of 5 minutes and Kato Kaelin is jokingly yelling at me not to answer the trivia question he just posed to a clearly flustered older-gentleman in a Saint Louis Blues hat. I'm evidently clearly struggling to not yell, "The Baxter Building," to the query of where the Fantastic Four live and neither the older guy or the young kid dressed as the television-version of Barry Allen from, "The Flash," know the answer. I don't really want the t-shirt that they'll win, but it is just getting awkward to see these two guys get all these questions of varying difficulty that they don't know the answer to (and it doesn't help the man dressed as a DC character gets all the Marvel questions and the older guy probably was just coming with some grand-kids who like this stuff and got roped into doing trivia). So yeah, Kato is playfully yelling at me to be quiet and this Wizard World is clearly going to be weird.

For those of you unaware, Kato is most famous for being a small-time actor who was friends with OJ Simpson and staying in OJ's guest-house the night OJ left town/possibly murdered his ex-wife Nicole and Ron Goldman beforehand. So yes, Kato is arguably famous for not being murdered by OJ Simpson. This pop-culture relevance apparently made him the perfect MC for Wizard World Saint Louis and to his credit he was very nice and unlike most celebrities/"celebrities" at the show did not want to charge me to take a photo. Observe: 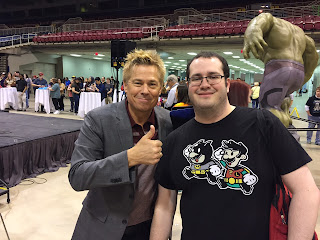 I was at Wizard World for a bit Late Friday and a good Chunk of Saturday, but my first five minutes of Wizard World Saint Louis 2017 encapsulated everything in itself as it was a mixture of fun, weird, and off-putting. Hey, let's use that for a header!

A Mixture of Fun, Weird, and Off-Putting

There were five actual vendors of comic-books at this Wizard World, which is ostensibly a comic-con but really more like a popular-culture convention. I'm not saying that to be negative, it just is worth observing that if you came to the show planning to look through long and short-boxes as well as shelves for cool comics, there wasn't much in the way of retail. I of course had the majority of my fun hanging-out in, "Artist's Alley," where the lot of stuff that appeals to me is found. Most of cool people I met or stuff I got occurred thanks to Artists' Alley or one of the few retailers.

It's not like I hate having random celebrities at this convention--it is par for the course that Wizard World gets random folk to come and sign autographs, but for every person who made sense--Kevin Conroy, the voice of Batman--there was someone random like Butch Patrick who played Eddie on, "The Munsters." I liked that show and his booth looked lonely so I went over to say hi and tell him about my enjoyment when it was on, "Nick at Nite." He thanked me and then some assistant insistently said, "This guy looks like he wants an autograph!" I had zero intention of paying Butch Patrick 40 dollars to give me a signed t-shirt so I politely worked my way out of that situation.
As that awkward moment illustrates, Wizard World had a weird assortment of folk who had next-to-nothing to do with comics and there weren't really any, "Celebrities," known specifically for comic-book work. Yes, we had plenty of cool creators of stuff in Artist's Alley, but what does Gene Simmons have to do with comic-books besides how sometimes comics have been made about KISS? Again though, I know that Wizard World is billing itself as less of a comic-book covention and more of a popular-culture convention. That said, if you can't manage to go as press like me it can be horrifically expensive, so get ready to shell out the cash to get parked, get in, and then buy an autograph from a random celebrity.

This sounds negative, and I don't mean to sound that way, it is just that some of the convention was off-putting as I mention in my header. I still had a great time talking with an assortment of vendors, all the cool folk in Artists' Alley, and I spent some time with friends from my comic-club enjoying the show. It was a fun time even if it was full of weird and off-putting moments as well. I would for sure go again, but with basically every year since the first one the focal point is less-and-less comics and more just a general celebration of popular culture. 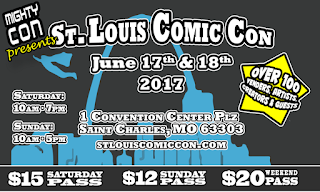 I'm okay with Wizard World not being about comics as much though, because there is a show like the upcoming, "Saint Louis Comic-Con," which has me really excited to go to a con with an actual comic-book specificity. It'll be in its 2nd year now, was a ton of fun last time, and is very well-priced. I'm not throwing shade at Wizard World, but I do know a number of people who didn't go to it this year, forgoing attendance instead for Saint Louis Comic-Con. Both are very different shows with separate identities and concepts, but if you want something centered on comics this is a great place to go. This year they actually have Chris Claremont coming, so that is rad!

Honestly, if you can afford it you should continue to go to the Wizard World shows and the more comic-based ones like Saint Louis Comic-Con. Both are fun in different ways, and while in all honesty the comic-loving part of me gets a lot more excited for this Summer, the aspect of me that enjoys general popular-culture had a great time at Wizard World too. In summary, "Fun, weird, and off-putting," is both a sentence I am overusing for this article, and extremely apt. I hope to get to go as press again next year and if I do I'll make sure to write extensively about it!
Posted by David Charles Bitterbaum at 1:41 PM