Musings on the Enjoyable Pop-Enthusiasm of Bruno Mars' Biggest Hits 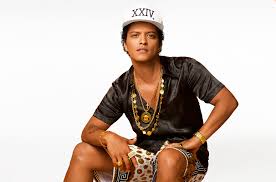 Not all of Bruno Mars' songs are loud, fast, and exciting pop-hits--just listen the dour, "When I Was Your Man," or, "Grenade," if you want some depressing songs about broken-hearts. That said, while Mars may sometimes ply his trade romantic sorrow, his biggest and most popular jams seem to be those with a neigh-relentless enthusiasm for dancing, partying, and other things people like.

You can't go to a wedding, birthday party, or bar mitzvah that features a dance-floor and be surprised when, "Treasure," or, "24K Magic," comes-on, along with other hits. I single-out that duo of jams however because they seem to be the most popular, with their surreal mixture of modernity whilst also sounding like they were dipped into and coated with a healthy dose of 1970's and 1980's nostalgisa--the video for, "Treasure," looks like it was made decades ago in a clear-cut example of weaponized nostalgia (see my posts on weaponized nostalgia for more talk of that). 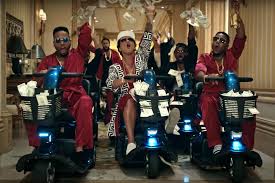 The thing about his peppy and energetic songs however is that even if they're horrifically commercial and vapid in their talking about little more than beautiful women and partying, these songs of pop-enthusiasm are just so darn fun you don't really mind. Just put on some, "24K Magic," with a group of folk and try not to smile (and then dance). I think the secret to these songs being so great is that Bruno Mars' knows to not be like your friend who gets annoying because they are always happy--he can be sad and depressed too, but balances it out perfectly with heaping doses of good times, joy, and funky beats.

This energy and sensation of fun is contagious, and the fact that almost any party-situation calls for some Bruno Mars exemplifies this fact. I ain't gonna begrudge him  for that.
Posted by David Charles Bitterbaum at 9:13 AM