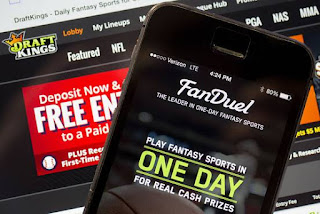 I imagine you have read my first post as a part of this two-part series about daily fantasy sports, and in that post I explain just what daily fantasy sports are (should you be wondering). Once I figured out how they worked I decided the best way to be a good journalist was to roll-up my sleeves and tread into the raging river of stats, odds, and bizarre screen names (if you can think of a pun, it's probably a screen-name). So, I took some scratch from my Paypal account (I'd sold some old comics and used a bit of that profit) and began taking part in the art of examining player statistics so that I can carefully estimate who will get me the most fantasy points, or as the less-knowledgeable call it who don't know about how Fantasy Sports are officially a game of skill--gambling (so shut-up Nevada).

Let's be real here though, this is so gambling. Yes there is skill involved, just as with Poker, yet that counts as dirty and naughty gambling as I discussed in the first post. This though? this is of course an esteemed game of skill. How did I actually do?

I took my dollars and spread them out between some NBA & NHL games, choosing various tournaments, leagues, and 50-50 options. I used a mixture of examining past stats, figuring if someone would do well, and picking players who looked happy to place my wager. I mostly lost, pretty badly. One person I did a head-to-head, "Duel," with did worse than me however, so I guess I had more, "skill," than him or her.
I had a little left, so tried to again study the stats for guidance, but this time I did one huge thing differently--instead of picking players who looked happy, I chose ones who appeared sad in their profile pic thinking that in some metaphysical way that would help make them happier. Sounds stupid, doesn't it? It doubled my (admittedly small as I'd already lost most funds) wager.

To review, I used my minimal skills of looking at stats and balancing the, "Cost," to pick a player with how happy they looked and lost. I did the same thing but went by how sad they were and won. There was a mixture of skill and pure luck. So, if this counts as a game of skill than poker does too, as both clearly involving a mixture of knowledge and good ol' dumb luck. Again however, poker is filthy, naughty, illegal gambling and this is a game of skill.

But wait, it gets more interesting! You see, to be a good reporter I went and scoured the websites dedicated to fantasy sports and found people who would post the line-ups they were sure would be a good pick for upcoming games--especially with a technically lower-risk wager like the 50-50s. These people must be incredibly skillful, considering they have websites dedicated to listing optimal line-ups as well as other features you can subscribe to for a low monthly fee (kind of like music or porn!) to increase your, "Skill," even more. I thought that these guys and gals must know what they're doing so I used their advice for a series of matches as well as making my own line-up. Both lost, but my own line-up did a lot better. Again, before you say I had bad luck or those sites made a bad guess, this isn't a game of guessing or gambling, THIS IS A GAME OF SKILL!
In all honestly though, I kept trying using a mixture of statistics, tips from the internet, and hope, and after a mixture of winning and losing, and losing, and thinking I'd win but then losing, I am at this point, "Down," from my initial investment. Also, I can say without a doubt I absolutely suck at fantasy basketball and rarely have done okay with fantasy hockey.

From this time playing daily fantasy sports I have discovered that it can help me be a bit more interested in a game (when you're hoping a player does well enough to boost your points you pay closer attention), and honestly is as much about luck as it is skill, resulting in my firmly believing that this should count as gambling, but that's perfectly okay, if people want to gamble a bit on the internet that's fine and they should be allowed to play poker too--Hell, people with a terrible, "Poker-face," like me would probably stand a better chance than in real-life.

After all of this I don't know if I plan to play daily fantasy sports too much in the future, but have some friends who do fantasy sports as a hobby without the high daily costs that I might join-in the fun of. I would tell anyone interested in DFS that as with any hobby things can get pretty expensive for people if they aren't careful--so if you choose to dip your toe into DFS do please play responsibly. It is something with a theoretically big reward, but that possible reward is outweighed by the immense risk of you winning nothing.
The biggest thing with gambling that you should keep in mind is that the house always wins. Should you calculate all the entry fees everyone pays versus what is won, a whole lot of money is leftover and going directly to Fanduel, Draftkings, etc. Plus, that, "Pool," of winners is pretty small and generally made-up of people who have a ton of time and money to dedicate towards winning--e.g. having a lot of that skill element that is admittedly in play with DFS (and poker, if we're being honest).

That's my in-depth examination of fantasy sports. I hope we've learned, laughed, had fun, and that no one lost too much money in their hopes of having the perfect fantasy team that in fact failed atrociously. Thanks for reading my posts and good luck to any of you who decide to try out daily fantasy sports.
Posted by David Charles Bitterbaum at 2:22 PM