A Scholarly Reading of, "Mighty Bubble," a Free Comic That Comes with Bubble Bath 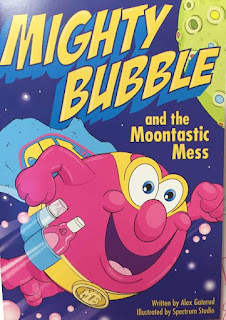 I have a friend who likes to de-stress by taking bubble baths. One brand they will use is Mr. Bubble, "America's Favorite Bath-Time Buddy." They noticed with their most recent purchase of bubble bath that it actually came with a comic covering the adventures of, "Mighty Bubble," as he tackles, "The Moontastic Mess." My friend figured, "Hey, David loves comics, I'll give him this," and here we are.

Mr. Bubble is in fact a brand that is over 50 years old and apparently prides itself on making bath-time extra fun, as well as providing fun activities on the website to do for the moments of your life you're not in the tub--you poor fool, you could be soaking in bubbles right now! Anyways, it seems that recently Mr. Bubble developed a heroic alter-ego known as, "Mighty Bubble," which grants him the ability to help make things clean. I would make fun of this super-power but considering how Batman doesn't even have powers and succeeds pretty well at brutally beating-up criminals, I can't hate on Mighty Bubble for succeeding at his niche of keeping things bubbly and fresh.
Anyway, the comic, how is it? Well, considering it is a free comic that comes with bubble-bath mix it is a little surprising to state it actually is well above the quality of a decent number of things I've read from everyone such as smaller publishers to Marvel and DC. True, it does open with the hackneyed plot-point of the whole story taking place in form of a flashback, but Brian K. Vaughan's beloved comic, "Ex Machina," did the same thing, and if having your whole story take place via flashback is good enough for BKV it's good enough for Mighty Bubble.

As I stated, we open in the present with a young boy sitting in the tub whilst he's covered in grime being asked by his mother, "How did you make such a mighty mess?" The young man, named Jake, proceeds to tell his mother about how he and his friend Olivia were having fun on the playground when the jungle gym--which resembled a space-ship--turned into an actual ship and blasted them off into space towards the Moon. This of course raises the question of if Jake and Olivia somehow discovered the way to activate a secret spaceship hidden in plain sight by the Government, or if Jake is just a Goddamned liar. Us readers must suspend our disbelief at Jake's claims, however, lest his whole story fall apart. 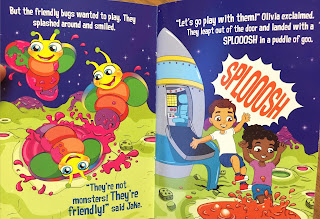 So, Jake and Olvia land on the moon, and discover some friendly space bugs who enjoy sloshing around in the strangely-colored goo on the moon. The bugs want to play, so Jake and Olivia leave the ship and proceed to jump directly into some hideously-orange space-slop. I couldn't help but be reminded of how the last time I saw an astronaut exposed to space-goo it was in the movie, "Prometheus," and that resulted in a whole bunch of hideous deformities and aliens, so at this point I was worried the kids were either going to start puking-up their guts or have an alien burst from their chest (thankfully neither of those things occurred as the material was safe).

Things get weirder however, as Jake and Olivia realize the moon is actually made out of cheese and proceed to throw the sticky cheese at one another--thankfully they know better than to eat moon cheese, even if they aren't smart enough to avoid mysterious space-goo. 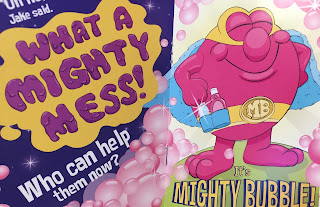 You may have noticed now we are about 1/2 of the way into the comic and Mighty Bubble has yet to appear. I too observed this, and was pleased when on the next page of the comic the kids get stuck in some purple alien goo and the mysterious Mighty Bubble appears to save the day. Using my scholarly-reading skills I can determine that much in the way that the popular series, "Marvels," had the reader view heroes from the same perspective as everyday folk, "Mighty Bubble," is taking a similar tone. It keeps us--the reader--out of Mighty Bubble's head, instead presenting him as a surreal and imposing force, not unlike the Superman comics that treat the character more as an otherworldly deity as opposed to the tales where we have first-person narration from the heroes' perspective.

By making Mighty Bubble a character that only appears for a shorter amount of time in the comic, it emphasizes how rare and special a moment spent with him is, much in the way a regular civilian would be in awe of a super-hero (hence my comparison to, "Marvels.") Despite Mighty Bubble being the primary character, we actually witness the story from the perspective of a secondary character, itself a clever plot mechanism, and one I applaud the comic's writer, Alex Gaterud, for doing. 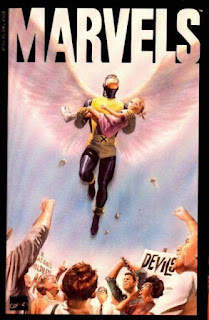 In case you're wondering if I'm being sarcastic with my praise and comparison of this book to popular series, the answer is, "Actually I'm not," as this in fact really is a better constructed comic than a lot of other books out there (I mean, I'm reading zero DC books and can count on one hand the ones that I maybe would be interested in reading if I had a never-ending budget). Sorry for that digression there; so we pick-up with Mighty Bubble appearing and bringing with him the ability to fly and produce bubbles. He uses this power to free the children and aliens from the space-goo, fly them over the sticky Moon-mountains to their spaceship, and then gives them bubble guns so that they clean the ship up.

Following the cleaning of the ship it blasts-off back towards Earth (with a space-alien in the ship too!) and we re-enter the present where Jake has now become clean and his Mother observes that getting clean, "Is just as much fun as getting dirty," which makes me think his mom is a liar too, as while I enjoy a good bath or shower it is extremely fun to just jump in a big old mud puddle when you're a kid, even if your parents scold you for getting your clothes dirty after they explicitly told you to not jump in the mud (as happened to me). The story then concludes with Jake stating how he can't wait for his next messy adventure. 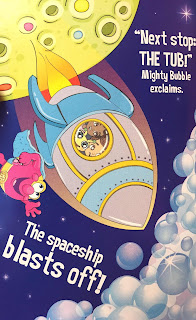 Oh, and the space alien that had been drawn as being in the ship that I figured must have been forgotten by the writer and/or artist (the art is by Spectrum Studio), actually then appears on the last page chilling by the tub--whether it is an actual alien or just a toy is left unclear, again making it up to us if Jake's story is real.

The fact that the writer and artist actually gave their comic enough of a continuity to have the alien appear on the last page after hitching a ride on the spaceship shows incredible forethought compared to say, Marvel's X-Men comics, which recently started making a big deal out of how the Terrigen Mists that turn people into Inhumans is harmful to mutants--which would have been a good story-element to mention when the mists first spread across Earth something like three fucking years ago and only suddenly became a relevant plot-point in the last 6 months, maybe. 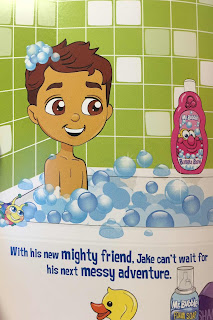 If a free comic that comes with bubble bath has a more concise and logical plot than the stories found in the comics of popular characters such as the X-Men, than clearly either we have some true talent writing the, "Mighty Bubble," comic or the X-books just really are getting shitty lately--maybe it's a little of both?

In closing, this comic that comes free with bubble-bath mix is better than a number of comics found on the newsstand for $2.99 or more (generally more, what with prices going up). I'm not sure what that means other than that it gave me the opportunity to diss other comic companies in this article, but should you be looking for something entertaining to read whilst you fill your tub up before adding bubble bath, I would recommend finding some Mr. Bubble that comes with this comic and buying it. Should you especially enjoy the book you can actually buy a Mighty Bubble towel-cape and mask. I'm seriously considering doing so and then running around my house wearing nothing except for the cape and mask yelling, "I'm Mighty Bubble, dirt's worst enemy!" My wife is a very patient woman, as you can imagine.
Posted by David Charles Bitterbaum at 9:46 PM