Secret Wars is Going to Have a Comic Named Like An Awful Event But Unrelated To It...Huh?

Secret Wars and the New Battleworld-Lands.
If you follow comics much you undoubtedly know that the upcoming "Secret Wars" event will result in a lot of comics getting temporarily or permanently cancelled by Marvel and replaced by various comics set in the "Battleworld" of the event. Some of the comics have been new versions of or extensions of current Marvel titles (Captain Marvel becomes Carol Corps) and some popular older events and comic-runs are being revisited (Old Man Logan, for one example). Now, so far most of the stuff that has been announced looks back to beloved series or times, but now I'm starting to worry Marvel might be getting confusing with their announcement today of yet another series that will have its own little chunk of land in the "Battleworld." 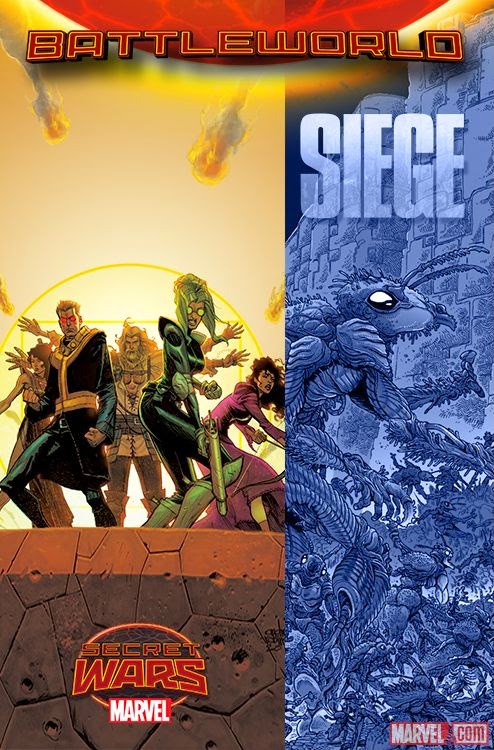 Back when Marvel wrapped-up "Secret Invasion" they made things a bit interesting by having Norman Osborn come out of the Skrull invasion looking like a hero. This led to his gaining power during a, "Dark Reign," of sorts until he eventually lost everything during a terrible event-comic called "Siege" that was little more than an excuse to kick Norman out and get rid of the mostly-reviled "Sentry" character. Today Marvel announced they are going to be doing a "Secret Wars" comic titled "Siege," so immediately I thought it would reference that awful comic. Well, in an even weirder twist, it isn't. That's right, a comic titled, "Siege" that Marvel announced today with a similar logo to it--even with the blue-shading--isn't actually at all involved with that earlier event. Instead, the comic is serving as a, "Spiritual sequel," to writer Kieron Gillen's awesome-but-mostly-ignored "S.W.O.R.D." mini-series.

It has protagonist Abigail Brand of that comic (and now this) working with a varied cast of characters on the Battleworld to prevent the entire Southern Pole of the aforementioned Battleworld from destroying the Shield (not S.H.I.E.L.D. as this is apparently a different, living entity), which she is in charge of. Apparently if this Shield is destroyed some hideous beings can ruin the rest of the Battleworld, so it falls on Brand and her, "Eclectic cast," including but not limited to, "Miss America Chavez from Young Avengers, Leah of Hel from Journey Into Mystery, Illyanna Rasputin from All-New x-Men, a medieval version of Kate "Hawkeye" Bishop, a number of UNITs from S.W.O.R.D and an army of clones from Mr. Sinister called the Endless Summers," to keep everyone safe.
This all sounds delightfully insane and involves a variety of characters Gillen has worked on before or will do justice to. Also, there will be some stellar art with one of the illustrators being the superb James Stokoe. Therefore, it all sounds great except for the name. I mean, why use the word, "Siege," if this comic appears to have nothing to do with it as it once existed? I mean, clearly a siege of sorts is going on, but unless the Sentry from that event makes a surprise appearance at the end of the first issue, or Osborn gets involved somehow I don't see what this has to do with that event whatsoever. Really, that makes using the title and the odd blue-shading not at all useful. I mean, didn't most people hate "Siege" with a passion and viewed it more as the means-to-an-end for finishing "Dark Reign" than anything else?

I just don't understand Marvel's thinking behind getting such a stellar writer (my favorite of 2014) and artist, then attaching them to a cool-sounding project but giving it that name. I just hope when the comic comes out it maybe makes some sense to remind us of a seemingly completely different comic.
Posted by David Charles Bitterbaum at 12:10 PM