Well, That Changed Quickly
Back during the week before Christmas it had been announced by Sony that they were not going to release "The Interview", which for those of you living under a rock is the Seth Rogen and James Franco movie where the government tries to get their characters to assassinate Kim Jong Un (the leader of North Korea). Everyone freaked out and got angry, so Sony changed course and announced any theater that wanted to show "The Interview" could--resulting in smaller chains and independent theaters jumping on the chance--and that it would be available to rent or buy online--basically an "on demand" release.

It has made a nice amount through this online method, and for all we know could be the first hint of a future where more movies are released to success simultaneously for theater-viewing and home-watching at the same time for people to choose what they prefer (Note: this sort of method had been attempted before, but usually with lesser-known movies, or lately via Kickstarted flicks). With all the hubbub that surrounded the release of the movie itself however, how is the film itself? Pretty good, if not amazing.

A Review of "The Interview" 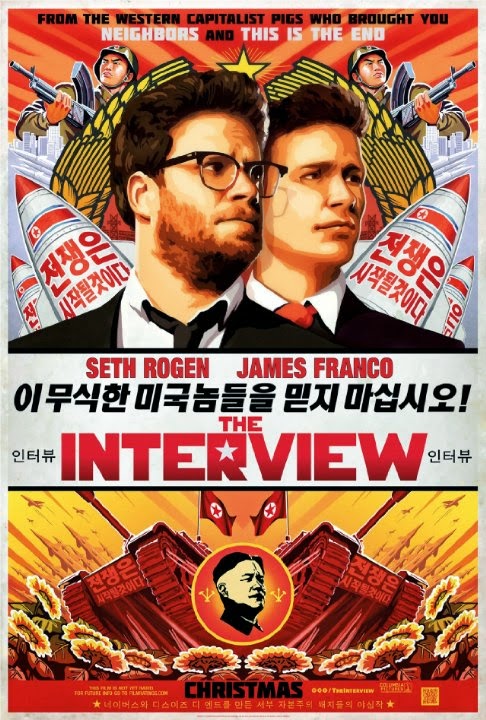 "The Interview" is a pleasant movie. I don't mean "pleasant" in that it is polite or genteel, it is anything but that. It is full of the usual absurd toilet humor, sex jokes, and otherwise nastiness one expects from Rogen and Franco, but if you like that stuff--as I do--it is a nice way to spend about two hours, hence my thinking I had a pleasant time. There are hints of political satire, but "The Interview" seems at times unsure whether it wants to be another silly gross-out flick, or an actual satire of one of the last mostly-secluded dictatorships left in the world (there are plenty of other dictatorships out there, but few as mysterious and walled-off as North Korea).

While not too often being especially insightful or political, it is easy to see why North Korea would have been mad about this movie as the film portrays Kim Jong Un as an insecure jerk prone to fits of rage and incapable of controlling of his bowels. Still, the assassination plot is more an excuse for Rogen and Franco to get up to their usual hi jinks than anything worth getting especially mad about, as it seemed some folk did what with Sony getting hacked. 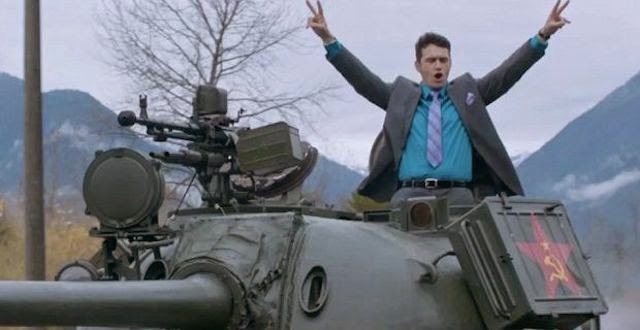 As some defectors from North Korea discuss in their review of the film, certain parts are strangely apt, as while there may not be fake grocery stores as shown to Franco and Rogen in the movie, there are plenty of "sets" created to show off a false image of positivism for the nation. Also, the opening of the movie with a small girl singing about how the U.S. should burn in Hell apparently isn't too far removed from some of the North Korean propaganda that portrays itself as a shining beacon of perfection with the rest of the world being a jealous hellhole. That said, while there is this political undertone, a lot of the time we still get plenty of poop-jokes and raunchy comments--just sometimes with the occasional political commentary.

Besides the occasional clever political thought two things struck me the most about the film. First was how Lizzy Caplan has really grown-up from being a kid like me when she was in "Mean Girls" all those years ago to now being an adult CIA agent in this movie.
The other thing that I found interesting was how Randall Park did an amazing job playing Kim Jong Un, really looking like him and expertly making the character start out seemingly nice and likable when he first meets Rogen and Franco, before slowly revealing his insanity.

Park has appeared in a variety of serious and humorous roles so his skills are put to good use as the character who is basically the focal point of the movie's plot and whom gets the most screen-time besides Rogen and Franco. It's the kind of part that the movie hinges upon, because if the portrayal of Kim Jong Un were poor it would sink the entire flick, therefore Park's superb job is admirable.
While "The Interview" may not be incredibly insightful, it does manage to make some clever statements about propaganda and how nations such as North Korea use it to their advantage. Plus it features the usual silly and vulgar humor I enjoy (and by now expect) from Rogen and/or Franco. It may not win any awards, but as I said at the start of my review, it was a pleasant way to pass some time. Should you be a fan of Rogen and Franco's films and their style of humor I would recommend checking "The Interview" out via on-demand or if you have a theater that is showing it.
3.5 out of 5 stars.
Posted by David Charles Bitterbaum at 12:05 PM