A Review of the Stellar "Nobrow 9: It's Oh So Quiet"

How to Express Silence? 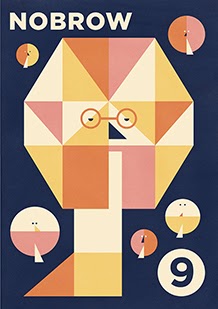 When it comes to expressing silence that's something easy to do aurally--you just don't have sound. How does one express the concept of silence in visual artwork, however? In a comic book you could not have speech-bubbles, I suppose, but there still can be the sensation of sound being made. I mean, we see things that we associate with being noisy, so how can artwork truly express silence? It is an interesting question.

Therefore, when I saw how "Nobrow 9" from the publisher Nobrow was covering the question of expressing silence in the latest entry of the fascinating anthology series, I was intrigued. While it wasn't the case with the earliest issues, as of late the format for the "Nobrow" anthologies involves the technique of having illustration on one side of the book and comics on the other, with the reader "flipping" the item itself so as to always be able to read left-to-right as us English-speakers are wont to do. The entirety of each issue also has a four-color palette that gives all the comics and art pieces a somewhat unified look in terms of the color scheme even if the content of each entry can vary greatly. Considering how illustrations and comics are both different sides of the same coin/book, I thought it would make sense to review each portion with its own rating, starting with comics first. 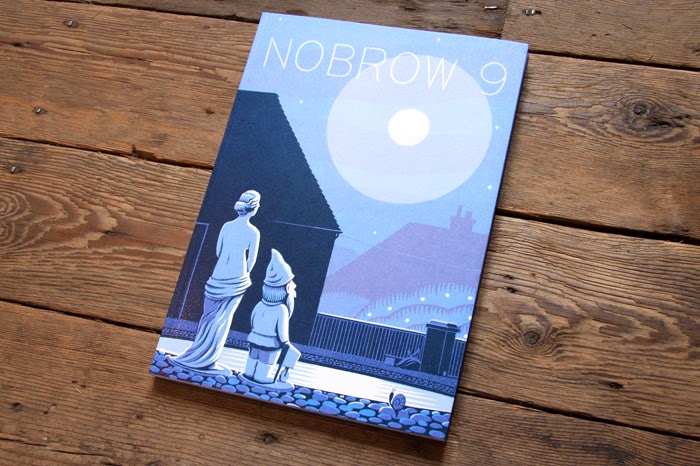 The thing with an anthology is often there are stellar comics along with ones that are less enjoyable. Part of this is that due to taste some of us will prefer certain stories over others, regardless of the craftsmanship within the comic itself. That said, every comic within this entry of "Nobrow 9" is expertly produced, but I liked some tales more than others. However, as is important when it comes to an anthology, I liked more than I didn't. Some comic-entries were almost more straight-up sequential art pieces, from Jim Stoten's pictures-within-pictures piece to Edward Carvalho Monaghan's "Bottles" comic. The fact they were silent wasn't really expressed within the story so much as due to being more a piece of art there wasn't as much need for a sensation of sound or the lack thereof.

Three of the stories I especially liked actually indicated the presence of speech and sound but cleverly kept us from knowing what exactly was said. Jamie Coe's story, "Fitting in," is the usual tale of adolescent troubles where a young person has to withstand bullies, but much of what we understand is contextual, as while we see mouths moving we can't know for sure what was said. The same emphasis on mouths occurs in my favorite story of the anthology, "The Silent Visitor". A weird tale of an alien that comes to Earth and hooks-up with a woman (among other things), we again do not see any actual speech-bubbles but from the way the woman's mouth is illustrated and her facial expressions she makes it often is quite apparent what the gist is. Joseph Lambert's entry is interesting too, with there actually being speech bubbles as characters talk, but said bubbles remain just out-of-frame, as if the comic cut-off some extra inches that would allow us to understand what is being said. It's quite the fun concept. 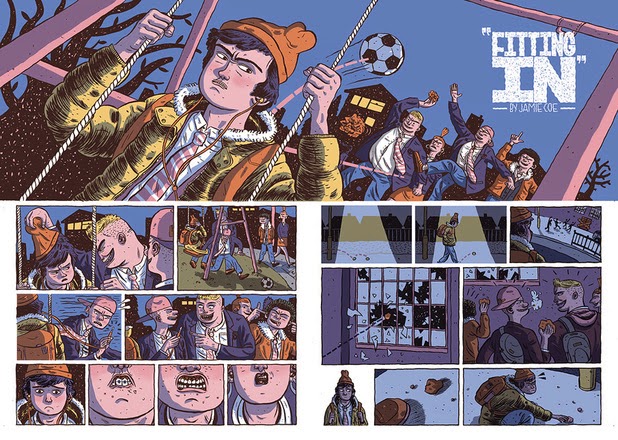 Other entries in the anthology express silence as a way of loneliness, whether Bianca Bagnarelli's piece about a child traveling long distances alone, or, "Silent Night," by Arne Bellstorf with its depressed female lead. Also, Hellen Jo's , "Are you there Lucifer,? It's Me, Cindy" could be read as a somewhat comedic take of a bored and lonesome woman trying to summon the devil for company (even if as with most things involving the devil it all goes awry). Not to mention how, the journey of a garden-monk statute in the first piece by Jon McNaught could be a reflection of how even objects have the human experience of spending their lives traveling some and seeing the world to eventually settle down with like-minded company.

With so many pieces I liked, it is okay that I found myself less impressed by others. William Exley's piece about a woman in a museum tricking some other trouble-makers was cute but drawn in a way that I found myself confused by the story's flow--with the same problem afflicting the otherwise interesting, "Dead End," by Kristen Rothbart. Even though the point of Zosia Dzierzawska's comic about an old tenement building escaped me, I had other pieces such as Kyla Vanderklugt's, "Wings," to keep my mind sufficiently busy with good stories and great art. Plus, as I said at the start, even if I didn't care a for a comic they all still looked incredibly beautiful.
With this mixture of stories, I discovered more tales I liked than not, and as such that makes the comic-side of this anthology a great success for having contributions which I greatly enjoyed. Hence, I award a superb rating of...
4 out of 5 stars.

Art
Oh man, how to rate art, especially when it all looks so good as within this side of the "Nobrow 9" book? I suppose I could just discuss how almost every piece was beautiful, with Stephen Carcello's picture of a quiet island with an ice-cream truck inexplicably crashed upon it being my favorite. That, or I could post-up a bunch of images and go, "See? It's incredible stuff!" Lastly, I could just tell you that you ought to seek out this book so as to fully enjoy the art and have this review section just be incredibly brief. You know, I think I'll do the last option I mentioned.
5 out of 5 stars. 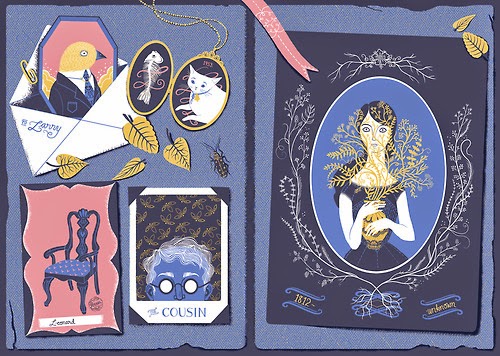 Is "Norbrow 9" worth seeking out and purchasing? Yes, I would say with no hesitation. If you are someone who enjoys great comics you'll quite like the book, and if you're a fan of great art you'll absolutely love it. You can follow this link to learn more about this issue of the series (it currently is sold-out on the site, however), and I would encourage you to do so.

Side-Note: A copy of "Norbrow 9" was provided by the publisher for review purposes.
Posted by David Charles Bitterbaum at 8:24 AM